A Travel Price Comparison for Italy Sestri Levante vs. Finale Ligure for Vacations, Tours, and Honeymoons

Should you visit Sestri Levante or Finale Ligure?

Trying to figure out where to travel next? This travel cost comparison between Sestri Levante and Finale Ligure can help. For many travelers, the cost of a destination is a primary consideration when choosing where to go.

Sestri Levante is a beautiful little town located on the Italian Riviera coastline of northwest Italy. Amongst the streets busy with visitors and locals, there is a pleasant sea breeze, shops galore, a lively dining scene, and historic landmarks like the area nicknamed the "Bay of Fairy Tales," as Hans Christian Andersen had lived in the village for a short time.

Located on the rugged coastline of the Italian Riviera, Finale Ligure is a commune of three traditional towns that have grown into one. The town as a whole is known for its white sand beaches and views as well as a system of charming stone paved streets and historic town centers. Some of the best sights include old forts and castles and a number of churches, some dating back to medieval times. There is also a number of rock climbing routes in the surrounding hills, for those seeking outdoor adventure.

Which city is cheaper, Finale Ligure or Sestri Levante?

The average daily cost (per person) in Sestri Levante is €114, while the average daily cost in Finale Ligure is €114. These costs include accommodation (assuming double occupancy, so the traveler is sharing the room), food, transportation, and entertainment. While every person is different, these costs are an average of past travelers in each city. Below is a breakdown of travel costs for Sestri Levante and Finale Ligure in more detail.

Travelers usually pay around €120 for a double occupancy room in Sestri Levante If you want to be in a premiere location or have high end amenities, you can expect to pay a bit more.

If you're traveling alone, you may be able to find a budget hotel or hostel for around €59. But for two people in a standard two-person hotel room in Finale Ligure the cost is €118 on average.

The price of a meal in Sestri Levante can vary widely. However, the average price for food per day is €27 per person, and a typical meal will cost around €11 based on the spending of previous visitors. Less expensive dining options can be found by eating street food or at fast food restaurants.

Food in Finale Ligure costs travelers about €27 per day on average. Restaurants can vary significantly in price, so choose wisely if you're trying to save money. Fast food and street stalls are typically your cheapest options, which sit down restaurants can be significantly more expensive.


Is it cheaper to fly into Sestri Levante or Finale Ligure?

Prices for flights to both Finale Ligure and Sestri Levante change regularly based on dates and travel demand. We suggest you find the best prices for your next trip on Kayak, because you can compare the cost of flights across multiple airlines for your prefered dates.

Sightseeing, admission tickets, things to do, and other entertainment expenses in Sestri Levante can vary widely by price. On average, visitors spend around €20 per person, per day on entertainment and sightseeing here.

Entertainment and activities in Finale Ligure typically cost an average of €22 per person, per day. This includes fees paid for admission tickets to museums and attractions, day tours, and other sightseeing expenses.

Alcoholic beverages can often be a significant portion of a traveler's budget, and the costs can vary greatly from person to person. In Sestri Levante, the average amount that a visitor spends on alcoholic beverages per day is €6.29.

While the amount that someone spends on alcohol while visiting Finale Ligure may vary from person to person, on average a person spends €5.59 per day on alcoholic beverages.

Here are a few nightlife and alcohol tours and activities from local tour providers in Sestri Levante:

When comparing the travel costs between Sestri Levante and Finale Ligure, we can see that Sestri Levante is more expensive. However, the two cities are actually relatively comparable in price, as the difference is somewhat minimal. Generally, this means that you could travel with generally the same travel style and level of luxury in each place. Since both cities are in Europe, it's no surprise that their costs are relatively close, as many destinations here have somewhat similar travel prices overall. 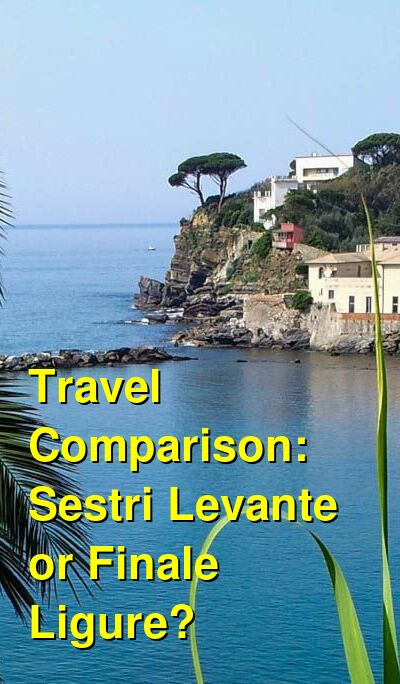