How much does it cost to travel to Sestri Levante?

How much money will you need for your trip to Sestri Levante? You should plan to spend around €114 ($135) per day on your vacation in Sestri Levante, which is the average daily price based on the expenses of other visitors. Past travelers have spent, on average, €27 ($32) on meals for one day and €45 ($53) on local transportation. Also, the average hotel price in Sestri Levante for a couple is €119 ($141). So, a trip to Sestri Levante for two people for one week costs on average €1,598 ($1,889). All of these average travel prices have been collected from other travelers to help you plan your own travel budget.

How much do vacation rentals cost in Sestri Levante? Prices vary by location, date, size of the place, and the level of luxury. See below for options.

How much does it cost to go to Sestri Levante? Naturally, it depends on the dates. We recommend SkyScanner because they can find the best deals across all airlines.

The price of renting a car in Sestri Levante will depends on dates, the type of car, the location, and your age. We recommend SkyScanner because they can find the best deals across all car rental companies.

Sestri Levante On a Budget

Sestri Levante, Italy
Sestri Levante is a beautiful little town located on the Italian Riviera coastline of northwest Italy. Amongst the streets busy with visitors and locals, there is a pleasant sea breeze, shops galore, a lively dining scene, and historic landmarks like the area nicknamed the "Bay of Fairy Tales," as Hans Christian Andersen had lived in the village for a short time.

The sights of Sestri Levante begin by the bay-two of them on either side of the peninsula. The Bay of Silence and the Bay of Fairy Tales both have beautiful beaches with views of fishing boats coming in and out of the harbors. Along the seafront, you can also walk Sestri Levante's promenade, which is especially stunning at sunset when the last rays of light dance upon crystalline waters of the bay.

Further inland, are the historic landmarks and churches of the picturesque village, each exhibiting a unique past and architecture. The church of St Mary of Nazareth, for example, is a Renaissance church located at the old town center of Sestri Levante. The interior of the church is beautifully decorated from the 18th and 19th centuries, while its original chapel dates as early as 1368. The Church of Saint Nicolo is another prime example, built in the year 1151. Exhibiting Roman Gothic architecture, this church has been renovated many times and is located just around the bend from St Mary on the peninsula.

Other sights in Sestri Levante include the 12th century Gualino Castle located on a hilltop along the seaside promenade, and the 13th century Marconi Towers which were used for radio transmissions by Guglielmo Marconi in the 1930s. This marks the highest point in Sestri Levante, with breathtaking views of the surrounding area that extend all the way to the Alps on a clear day.

Sestri Levante is located about halfway between Genoa and La Spezia. The original part of the village is situated on a peninsula with the Baia delle Silencio (Bay of Silence) to the south and the Baia delle Favole (Bay of Fairy Tales) to the north. As mentioned earlier, the northern Bay of Fairy Tales was named in honor of Danish writer, Hans Christian Andersen, who lived in Sestri Levante for a short time in 1833. Today, this bay has a lively beach and promenade with beautiful houses and a number of beach bars catering to those relaxing the day away. The Bay of Silence also has a boardwalk but is quieter and more romantic with views of fishing boats coming in to dock. Moving in towards the town center, there is a system of streets and alleyways that are lined with bustling shops as well as cafes, bars, and restaurants to eat or drink. The train station is located just north of the center, which provides easy access to other coastal towns and cities.

Sestri Levante offers a full range of activities that extend from touring the historic landmarks of the village to leisurely beachside time on the bays. Most everything can be reached on foot, turning any day of sightseeing into an easy hike, especially if you climb your way to a hilltop viewpoint at one of the town's more escalated landmarks. Villas, castles, towers, and churches can fill your days, but beyond sights, the culture and atmosphere of the village can be found amongst is busy streets full of cafes and shops. The beaches are also a prime spot for things to do, with a boardwalk full of options and a number of beach bars.

Cuisine of Sestri Levante consists of traditional Italian fare common throughout the Liguria region. Olive oil is used in almost everything, and the favorite sauce is pesto made with basil, pine nuts, garlic, olive oil, and Parmesan cheese. There are many different kinds of homemade pastas like trofie and tagliatelle, as well as a selection of meat dishes like veal roulades, lamb stew, and stuffed pancetta all seasoned with aromatic herbs and spices of the region. Being a fishing village, Sestri Levante has a seafood and fish selection that is fresh and abundant. Other small bites include things like focaccia and vegetable pies, while the dessert specialty is gelato, or Italian ice cream. There are plenty of dining options along the bay as well as throughout the town center.

The closest major airport is Genoa Cristoforo Colombo Airport in the city of Genoa which has daily flights from other major European cities like Rome, London, Munich, Paris, Moscow, and Istanbul. It is located about 60 kilometers northwest of Sestri Levante.

Most of the coastal cities of the Liguria region can be navigated by train, so it is easy to travel from one to the next. 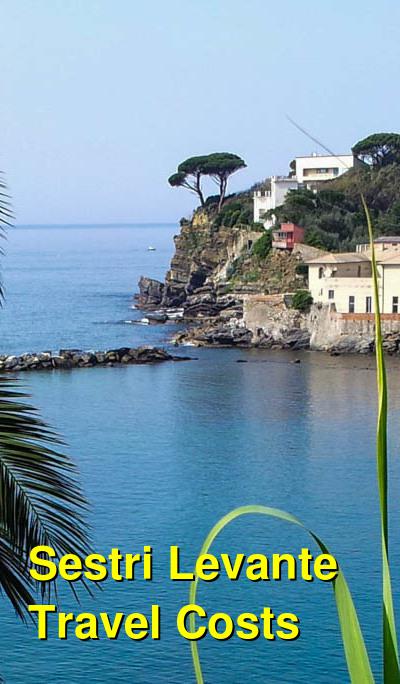