A Travel Price Comparison for China Zhejiang vs. Anhui for Vacations, Tours, and Honeymoons

Should you visit Zhejiang or Anhui?

If you're trying to decide where to visit between Zhejiang or Anhui, this travel comparison, which includes costs, can help. The overall cost of travel is usually a consideration when deciding where to go next, and the cost comparison down below can help you decide based on the average prices from other travelers along with your own travel budget.

The Zhejiang Province of China is located on the eastern coast, bordering the East China Sea. The province is known for their hilly landscape, natural beauty, and fantastic food. Most port cities are sprawling urban jungles surrounded by natural beauty, while interior cities are far more rural and live off the land.

Being a coastal province, expect plenty of rain during the summer, especially in August when typhoon season is in full swing. Winters are not too harsh, with temperatures between 35 and 45 degrees Fahrenheit. The ideal time to visit is spring, from April to May when temperatures are in the 60's and rain is much lighter.

Exploring the Chinese province of Anhui is like walking around a painting. The picturesque mountains and the untouched villages make this a quiet escape from the harsh and loud cities surrounding it. Travelers should put Anhui on their list if they're seeking a glimpse into the China of the past.

Which city is cheaper, Anhui or Zhejiang?

The average daily cost (per person) in Zhejiang is $54, while the average daily cost in Anhui is $55. These costs include accommodation (assuming double occupancy, so the traveler is sharing the room), food, transportation, and entertainment. While every person is different, these costs are an average of past travelers in each city. What follows is a categorical breakdown of travel costs for Zhejiang and Anhui in more detail.

Is it cheaper to fly into Zhejiang or Anhui?

Prices for flights to both Anhui and Zhejiang change regularly based on dates and travel demand. We suggest you find the best prices for your next trip on Kayak, because you can compare the cost of flights across multiple airlines for your prefered dates.

Tours and Activities in Zhejiang

Some specific costs of activities, tours, and entrance tickets for Zhejiang are as follows:

When comparing the travel costs between Zhejiang and Anhui, we can see that Anhui is more expensive. However, the two cities are actually relatively comparable in price, as the difference is somewhat minimal. Generally, this means that you could travel with generally the same travel style and level of luxury in each place. Since both cities are in Asia, it's no surprise that their costs are relatively close, as many destinations here have somewhat similar travel prices overall. 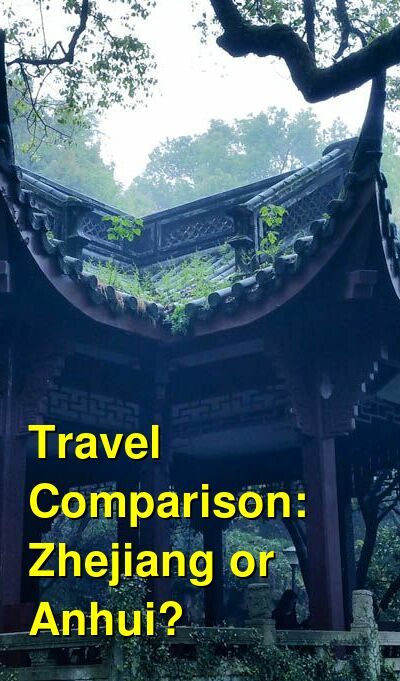