How much does it cost to travel to Dalian?

How much money will you need for your trip to Dalian? You should plan to spend around ¥595 ($91) per day on your vacation in Dalian, which is the average daily price based on the expenses of other visitors. Past travelers have spent, on average, ¥157 ($24) on meals for one day and ¥235 ($36) on local transportation. Also, the average hotel price in Dalian for a couple is ¥627 ($96). So, a trip to Dalian for two people for one week costs on average ¥8,333 ($1,270). All of these average travel prices have been collected from other travelers to help you plan your own travel budget.

A vacation to Dalian for one week usually costs around ¥4,166 for one person. So, a trip to Dalian for two people costs around ¥8,333 for one week. A trip for two weeks for two people costs ¥16,666 in Dalian. If you're traveling as a family of three or four people, the price person often goes down because kid's tickets are cheaper and hotel rooms can be shared. If you travel slower over a longer period of time then your daily budget will also go down. Two people traveling together for one month in Dalian can often have a lower daily budget per person than one person traveling alone for one week.


How expensive is Dalian? How much money do I need for Dalian?

How much does a trip to Dalian cost? Is Dalian expensive? The average Dalian trip cost is broken down by category here. All of these Dalian prices are calculated from the budgets of real travelers.

Find a hostel, guesthouse, or B&B in Dalian

How much does it cost to go to Dalian? Naturally, it depends on the dates. We recommend SkyScanner or Kayak because they can find the best deals across all airlines.

The Best Hostels in Dalian, China for Backpackers, Students, and CouplesShenyangBenxi

Dalian On a Budget

Dalian, China
Dalian, China is a very large peninsula city located in the southernmost part of the Liaoning Province in northeast China. The area has a wealth of history, with roots in Russian and Japanese rule, resulting in unique architecture and many universities that attract foreign students and teachers. Dalian is also known for their beautiful green spaces and relaxing beaches which juxtapose a lot of the more industrial cities found throughout other areas of northern China.

Dalian is arguably at its most beautiful during the spring time when cherry blossoms begin to bloom and temperatures are a little more comfortable in the low 70's Fahrenheit. Autumn is another great time to visit, although temperatures tend to be in the low 60's, you'll likely beat the humidity and crowds. Summers see many domestic tourists as Dalian gets reaches the high 80's making for perfect swimming weather in one of the beaches.

Experience the multi-cultural beauty of Dalian at Zhongshan Square, located in the center of the financial district. The square was designed by Russians but the majority of the buildings were done by the Japanese rulers in the 1920's. The square acts as a huge social hub where you'll find locals playing sports or just chatting, making it a wonderful place to get lost in the Dalian atmosphere.

Continue your exploration of Dalian's past with a visit to Russian Street, so named for being one of the few places where you can explore the houses left behind by former Russian colonizers. Some of the buildings are replicas, although there are a few originals that have been preserved, including the Dalian Art Gallery. The gallery is housed inside of a 1910 Russian building and hosts local artists works ranging from the traditional Chinese art forms to modern art. You can also see some Russian influence at People's Square in the center of the city, where many of the government buildings are, a few of which have the old Russian style architecture. People's Square is also a great place to people watch, fly a kite, or walk around the fountains.

A smaller district, Shahekou, is best known for Xinghai Sqaure, the largest square in Asia. It also has a few small mountains and hills that are worth a short climb to enjoy the views. Finally, there is Ganjingzi District, which is not of much interest to tourists due to it being the major industrial area of the city. With that said, Ganjingzi is one of the areas tourists are most likely to pass through as it is home to the Dalian International Airport.

For great views of the city, climb up to the TV Tower on top of a hill in Labour Park. There are cable cars to take you to the tower, as well as a slightly hidden path that you can hike up the hill in order to avoid too many tourists at the tower. While you can take a cable car down, go for something a little more adventurous and take the slide down!

More hiking can be found near Heping Square in the Shahekou District or take a leisurely climb up Taishan Mountain, which provides panoramic views of the city. If it's warm enough when you visit, a must is a visit to one of the beaches. You can find swimming beaches in Xinghai Square and Xinghai Park, these are two different locations, with the square being in the southwest part of the city.

Dalian cuisine is influence by Dongbei cuisine, which often has large portions and simple flavors. Being a peninsula city, expect to also see a lot of seafood incorporated into dishes. You'll find that Dalian has a huge number of restaurant options, no matter your taste or price range, and its pretty easy to wander into any restaurant and get a great meal. Head to the Zhongshan and Xigang districts for some of the best restaurant options.

As with food, there's a huge variety of bars in Dalian, ranging from small bars filled with locals to huge clubs full of foreign students. You'll also find many night markets where you can pick up a beer and some light food while wandering around or sitting in one of makeshift seating areas.

Dalian is a super easy city to get in to; you can get in through the Dalian Zhoushuizi International Airport, train, bus, and even boat if you're coming from South Korea. Buses and taxis run from the airport into the major parts of the city, just be sure to have them put the meter on.

Getting around is also fairly easy, you'll find going along on foot is easy enough due to the tourist sights being fairly close together. There are also trams, light rails, and buses that are pretty easy to navigate and there's even three tourist buses that make loops around different parts of the city if you prefer to avoid public transit. Taxis are plentiful here, although many of them tend to be illegal, so make sure there is a meter in the car and that they turn it on to avoid and problems. 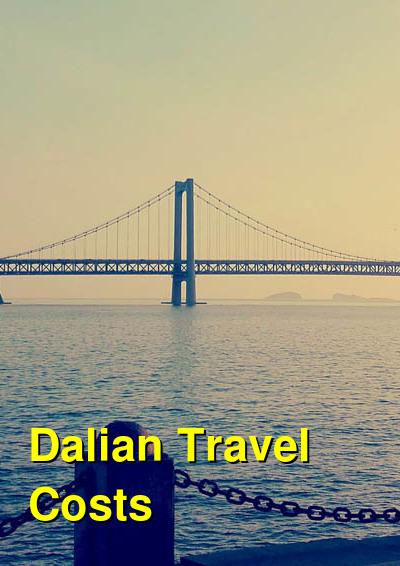