How much does it cost to travel to Harbin?

How much money will you need for your trip to Harbin? You should plan to spend around ¥315 ($46) per day on your vacation in Harbin, which is the average daily price based on the expenses of other visitors. Past travelers have spent, on average, ¥80 ($12) on meals for one day and ¥8.66 ($1.27) on local transportation. Also, the average hotel price in Harbin for a couple is ¥239 ($35). So, a trip to Harbin for two people for one week costs on average ¥4,412 ($645). All of these average travel prices have been collected from other travelers to help you plan your own travel budget.

A vacation to Harbin for one week usually costs around ¥2,206 for one person. So, a trip to Harbin for two people costs around ¥4,412 for one week. A trip for two weeks for two people costs ¥8,825 in Harbin. If you're traveling as a family of three or four people, the price person often goes down because kid's tickets are cheaper and hotel rooms can be shared. If you travel slower over a longer period of time then your daily budget will also go down. Two people traveling together for one month in Harbin can often have a lower daily budget per person than one person traveling alone for one week.


How expensive is Harbin? How much money do I need for Harbin?

How much does a trip to Harbin cost? Is Harbin expensive? The average Harbin trip cost is broken down by category here. All of these Harbin prices are calculated from the budgets of real travelers.

Looking for a hotel in Harbin? Prices vary by location, date, season, and the level of luxury. See below for options.

How much does it cost to go to Harbin? Naturally, it depends on the dates. We recommend Kayak because they can find the best deals across all airlines.

The price of renting a car in Harbin will depends on dates, the type of car, the location, and your age. We recommend Kayak because they can find the best deals across all car rental companies.

Tips and Handouts Budget in Harbin

Harbin On a Budget 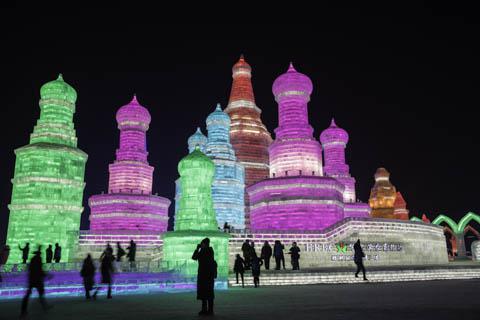 The Ice Festival in Harbin, China
Harbin, China is the northernmost major city in the country, with a population of over 10 million. Harbin was founded in 1897 by Russia, which has resulted in a lot of Russian influence throughout the city and many Russian citizens. The city is most famous for their annual International Snow and Ice Festival, a two-month-long festival running from January through February of each year.

Harbin is well-known for their long, cold, winters which see temperatures averaging 10-35 degrees Fahrenheit. Summer is a great time to visit as the weather is breezy with temperatures in the high 70's, and far less humid than other Chinese cities.

Some of the most popular sights in Harbin are the 19th century Russian buildings, which maintain much of their original splendor. You'll find the majority of these buildings in Harbin's Old Quarter near the Songhua River. One of the most famous buildings is the St. Sophia Cathedral, a stunning former Russian Orthodox church built in 1907 turned Museum of Architecture.

Sun Island is a lovely park where you'll find newlyweds taking photos in the summer and snow sculptures in the winter. The park is great for strolling around, feeding the petting deer, and enjoying the turtle pond. Harbin is also home to a few temples, the most famous of which is the Confucius Temple which is one of the largest temples in northeast China. The Temple of Heavenly Bliss is another popular destination, it is a large and active Buddhist temple which you can visit on tourist days.

Harbin is a huge city, with over nine districts throughout the city itself. Keep in mind, many of these districts are industrial and residential, making them of little interest to tourists.

The three main districts that make up the urban core are Daowai, Songbei, and Nangang. You'll find the large majority of tourist attractions here.

Daoli District is famous for Central Street, one of the main business streets in Harbin.

If you're around in the winter, specifically late December through February, you'll be able to enjoy the huge Harbin International Ice and Snow Scultpure Festival. Sun Island comes to life with dozens of snow scultptures while Ice and Snow World is created west of Sun Island and has a number of buildings and scultptures made of ice.

Harbin also hosts an annual International Beer Festival in late August, with the local Harbin Brewery being the center of the show. It is one of the largest beer festivals in the world, rivaling the size of US and German Oktoberfests, and features beer from all over the world. The festival boasts live music, entertainers, and giveaways. Harbin also hosts a Summer Music Festival in July, held in the city square, where famous Chinese bands play a free concert. The festival is held every two years and brings thousands of Chinese and Russian tourists.

Harbin has a truly special blend of food options, taking inspiration from Russia, Mongolia, Korea and other areas of China. You'll find the food to be hearty, with a lot of stews using cabbage, potatoes, and corn. Shaokao, or Chinese BBQ, and Hot Pot are popular in Harbin as well. A popular food here is actually anything that comes on a stick! From Haws-fruit stacked on a skewer and covered in frozen syrup- to grilled bread buns, you'll find plenty of awesome options. Also, due to the influence from Russia, expect to find a lot of Russian bakeries throughout the city.

Harbin is considered to be one of the less traditional cities in China, meaning they have a pretty lively night life! You'll find a lot of people start the night in cheap Hot Pot restaurants drinking local beers, then move on to some of the dancing clubs. No matter what your preferred night out involves, you're bound to find it in Harbin!

Harbin is very easy to get in to, from domestic and international airports to trains, buses, and cars. Getting around Harbin is best done either on foot or by taxi. It's easy enough to navigate on foot, although some destinations are fairly far apart and require other modes of transportation to get to them. Taxis are pretty cheap and there are always plenty around. Just make sure the meter is on to avoid later issues with negotiating the price. Also, make sure you have the address of your destination written in Chinese characters and knowing some key phrases in Madarin will help when traveling via taxi.