Naples makes a great base for exploring the many sights along the coast. Because many tourists are intimidated by the idea of a large city, Naples offers an affordable and authentic experience without the hordes of tourists you find elsewhere in Italy. There are a number of decent hostels in the city, but not the large number you can find in Rome or Paris. There are also plenty of mid level and luxury hotels to choose from. It's nice to base yourself in the historic heart of the city as this is where most of the sights are located. 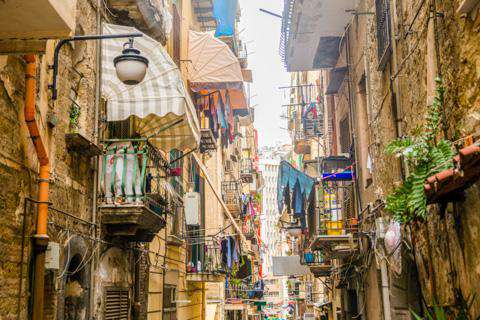 The streets of Naples
You can find a bed in a hostel for about €20 to €25. Many hostels also have private rooms available if you want some space to yourself. These rooms run about €60. Read our guides to choosing a hostel: Best Hostels in Naples or Affordable and Quiet Hostels in Naples. Furthermore, a few of the more popular hostels in Naples are listed here.

Giovanni's Home - This hostel is a favorite of backpackers for its friendly English speaking staff and central location.

Hostel Mancini - This hostel is conveniently located right by the Naples Central train Station making it perfect for daytrippers who want to take the Circumvesuviana trains to Pompeii, Mt Vesuvius, Sorrento, or Herculaneum.

Hostel of the Sun - This hostel has helpful staff and a lot of good information for visitors. It's located in the city center near the ferry terminal and bus terminal. It's a bus ride from the train station.

There are a number of mid-range hotels throughout Naples' historic center. Many have the standard amenities but like elsewhere in Italy, you can expect the rooms to be on the smaller side. Many mid-range hotels also have just a handful of rooms, making them simple but charming. Rooms typically cost between €85 and €130. See rates and prices here.

Like most cities in Italy, Naples has its fair share of luxury hotels. You can expect to pay anywhere from €150 up a night for a four or five star hotel. Several of the top luxury hotels are mentioned below.

Hotel Palazzo Alabardieri - This hotel, located near the Royal Palace, has a bar and lounge area that makes a nice place to relax after a busy day. Whether you're traveling on vacation or for business, it has all of the amenities you might need.

Grand Hotel Vesuvio - This impressive hotel has hosted many famous people over the years. It was originally opened in 1882 and it has 160 rooms and suites to choose from. It's located near the marina and it has an excellent fitness center, on-site restaurant, and a bar, making it a great option for anybody who wants to stay in style.

Historical Center - This area is at the heart of historical Naples. It's got lively piazzas, some historical sights, and a vibrant atmosphere that gives Naples some of its character. The area runs between Castel Nuovo to the Museo Archeologico Nazionale and east from Via Toledo and Quartieri Spagnoli to the Porta Nolona Fish Market. Through the middle of the area is the street of Spaccanapoli. Popular landmarks in this neighborhood include the opera house, Teatro San Carlo, and the historic shopping mall, Galleria Umberto. 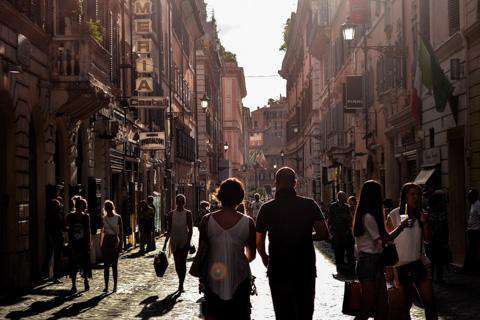 Chiaia - This seaside area is one of the most famous shopping areas in Naples. You'll find many top Italian lines here including Armani, Prada, and Louis Vuittan as well as some local, independent boutiques. This is also one of the cleaner parts of Naples. Many visitors enjoy taking a "passeggiata" (stroll) along the bay following Lungomare di Chiaia. In the evening it's more popular to head to Via Chiaia.

Piazza Garibaldi - This area is part of what gives Naples it's rough around the edge reputation. This is also where you'll find the train station as well as a stop for the Circumvesuviana line, which goes to Pompeii, Herculaneum, and Sorrento. There's a tourist office in the train station if you have any questions or concerns.

Santa Lucia - This area was once a fisherman's quarter but now you'll find mostly yachters here. It's a nice place to take a walk along the water's edge, following the pedestrian routes of Via Mazzuro Sauro and Via Partenope. You can also cross the bridge to Borgo Marinari, which is a nice island with old houses.

Quartieri Spagnoli - This area, the Spanish Quarters, dates back to the 16th century, and is considered one of the more "authentic" parts of Naples. There's a traditional old world vibe here with drying linens strung from lines across alleys. Pick up some produce from local vendors and head to Piazza del Plebiscito. It's best to explore this neighborhood without a plan, just wander and see what you stumble upon.

Vomero - This middle to upper class neighborhood looks out over Naples from its hilltop setting. It has some great shopping, an impressive restaurant scene, and a vibrant nightlife. There are plenty of independent shops and markets that make it a worthwhile place to visit.

Rione Sanita - This neighborhood is outside of Naples city center. This is where you'll find the Catacombs of San Gaudioso and of San Gennaro. Fontanelle Cemetery is also here.

Most tourists in Naples walk around the city center, as most tourist attractions are close together and easily accessible on food. The exceptions to this include the Museo di Capodimonte and Certosa e Museo di San Martino, which can be reached with Naples' funiculars. The city also has a metro system. Line 1 connects the historic center of the city to Central Station. Museo Station is near the National Archaeological Museum. Buses offer the most comprehensive and often the fastest way to get around the city. Grab a map of the bus routes before you head out.

The Circumvesuviana train is the popular regional train that connects Napes to the areas around Mount Vesuvius. The trains can get crowded, so unless you get on at one of the first stops, expect standing room only.

There are two ports in Naples - Molo Beverello and Mergellina - where you can catch ferries to destinations such as Capri, Ischia, Procida, and Sorrento. Research the schedule in advance because departures may be limited depending on the season. 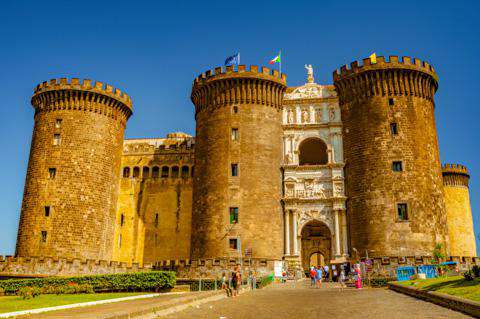 The "New" Castle
There are many fascinating historical sights in Naples. Popular places to visit include Capodimonte Royal Palace and Museum, Naples Cathedral, San Martino Monastery and Museum, Castel Nuovo, and the Catacombs of San Gennaro, among others. Also make sure you head to the Naples Harbour, which is full of energy and has impressive views. For a traditional look at life in Naples, wander around the unique neighborhood of Santa Lucia.

For many visitors, Naples also serves as a base for exploring many interesting parts of Italy. Popular day trips from the city include Pompeii, Mount Vesuvius, Herculaneum, The Amalfi Coast, Capri, Sorrento, and Ischia.

Naples' is the famed birthplace of pizza, but the food scene really does offer so much more. Make sure you sample the city's delicious seafood, fresh produce, and pastries as part of your Neapolitan food tour.

Pizza
Pizza is one of many claims to fame in Naples. The traditional Napolese pizza was inspired by a visit from Queen Margherita in 1889. Although flatbreads similar to those in the Arab world had long been a staple in Napolese diets, the concept of the pizza was first created at Pizzeria Brandi. They added tomato sauce, mozzarella di bufala and basil to pizza dough and the new creation was greeted with enthusiasm by the royal court. It is now famously called pizza margherita.

You can also take classes in Naples to learn how to make your own pizza!

Naples takes their pizza seriously. In 1984 they founded the Associazione Verace Pizza Napoletana. Restaurants must apply for certification that they use proper artisan traditions to create their pies. Requirements for certification include:

- Flour and yeast requirements for the crust and the dough must be kneaded by hand or with a low-speed mixer and formed by hand.
- Sauce must be made with raw, pureed San Marzano tomatoes from Italy.
- The cheese must be fior di latte or mozzarella di Bufala
- All of the ingredients must be all natural and fresh
- Pizzas are baked for 60 to 90 seconds at 800 F in a stone oven with a wood fire 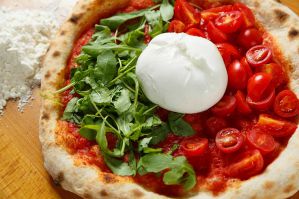 Although pizza margherita is the most famous, there are a variety of other types of pizza available in Naples. If you want something a little different, try the class pizza alla napoletana, which has anchovies, olives, pickles, capers, and oregano. Calzoni and panzerotti are also popular dishes.

Pasta
Naples is famous for its pizza, but there are many local pasta specialties to choose from as well. Two of the most popular seafood dishes include spaghetti alle vongole and risotto all pescatora. Other options include pasta e patate (pasta and potato soup), a pasta pie known as timballo, pasta e fagioli (pasta and bean soup), and gnocchi alla sorrentina, which is a potato dumpling dish made with tomato sauce and mozzarella.

Pastries
Pastries in Naples are among the best in the world and the most famous Neapolitan pastry is sfogliatelle, which is a light shell shaped pastry.

The Best Day Trips from NaplesThings to Do in Naples: Sights, Attractions, & ActivitiesGetting Around Naples: The Circumvesuviana, Ferries, the Metro, and Taxis 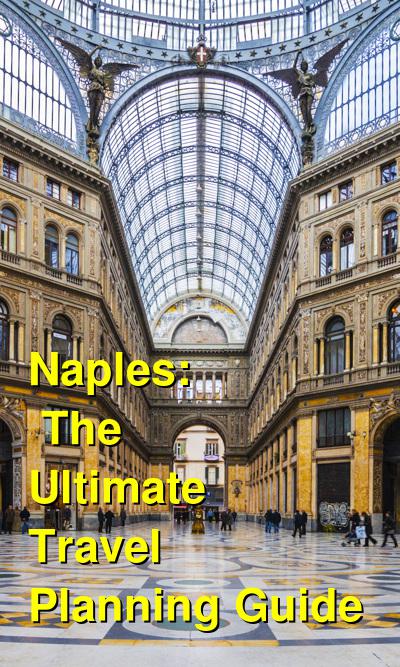