How much does it cost to travel to Katoomba?

How much money will you need for your trip to Katoomba? You should plan to spend around AU$165 ($127) per day on your vacation in Katoomba, which is the average daily price based on the expenses of other visitors. Past travelers have spent, on average, AU$21 ($16) on meals for one day and AU$61 ($47) on local transportation. Also, the average hotel price in Katoomba for a couple is AU$191 ($147). So, a trip to Katoomba for two people for one week costs on average AU$2,313 ($1,779). All of these average travel prices have been collected from other travelers to help you plan your own travel budget.

A vacation to Katoomba for one week usually costs around AU$1,157 for one person. So, a trip to Katoomba for two people costs around AU$2,313 for one week. A trip for two weeks for two people costs AU$4,626 in Katoomba. If you're traveling as a family of three or four people, the price person often goes down because kid's tickets are cheaper and hotel rooms can be shared. If you travel slower over a longer period of time then your daily budget will also go down. Two people traveling together for one month in Katoomba can often have a lower daily budget per person than one person traveling alone for one week.


How expensive is Katoomba? How much money do I need for Katoomba?

How much does a trip to Katoomba cost? Is Katoomba expensive? The average Katoomba trip cost is broken down by category here. All of these Katoomba prices are calculated from the budgets of real travelers.

How much do AirBnB's cost in Katoomba? Prices vary by location, size of the place, and the level of luxury. See below for options.

How much does it cost to go to Katoomba? Naturally, it depends on the dates. We recommend SkyScanner because they can find the best deals across all airlines.

The price of renting a car in Katoomba will depends on dates, the type of car, the location, and your age. We recommend SkyScanner because they can find the best deals across all car rental companies.

Best Hostels in Katoomba and the Blue MountainsSydneyNewcastle

Katoomba On a Budget

This area can be generally expensive, but is on par with other destinations in Australia and around Sydney. Plenty of luxury places can be found here that cost more than average, but plenty of cheaper places to stay can be found here, too. Expect to pay for various activities such as tours and entrance fees, too.

The landscape is sprawling with majestic scenery over a rugged terrain of steep cliffs, forests, waterfalls, and villages. Whether you come to hike, climb, bike, or drive to the scenic viewpoints, a curtain of tranquility falls upon the mountains in a blue haze from which they get their name.

The most popular attraction lying within the mountains is Echo Point at Katoomba. A major lookout point, it offers spectacular views of Jamison Valley and the Three Sisters - an iconic rock formation of the Blue Mountains. There is also an information center here with displays about the environment of the area, as well as maps and souvenirs available for sale. Other popular lookouts include Govett's Leap with incredible views over the Grose Valley, and Gordon Falls which provides views of the large waterfall and surrounding forest. For a more leisurely way of sightseeing, Cliff Drive around Katoomba and Leura has many pull-offs for admiring the views.

Katoomba is the largest and most visited town of the Blue Mountains with access to Echo Point, Scenic World (railway and skyway), and plenty of shopping. It is a very laidback town with an artsy hippie population and examples of art deco architecture and shop fronts along the main street of the town. Leura, right next to Katoomba has quaint craft shops and boutique shopping, Wentworth Falls is mainly bush with some views and Bed & Breakfasts, Blackheath is a scenic mountain town surrounded by parks and scenic walks, and Mount Victoria is the highest point of the mountains. In the lower mountains, the most visited towns include Springwood and Glenbrook.

The Blue Mountains are a popular destination for rock climbing, mountain biking, hiking, and a number of other adventure sports. Popular climbing destinations include the Centennial Glen cliffs near Blackheath, Mount Victoria, Mount Piddington, and Mount Boyce, while mountain biking takes place on a number of trails just off of the Great Western Highway, some including Narrow Neck and Anderson's Fire Trail.

Many trails are also popular for hiking in the Blue Mountains, in addition to a number of other nature trails. Canyoning, too, is a fun activity for those seeking a different kind of adventure with a new perspective of the mountains from below.

Other worthwhile ventures include The Giant Stairway walking track which runs down a cliff and past the Three Sisters into the valley, as well as the Jenolan Caves. The Katoomba Scenic Railway is also popular as is the Scenic Skyway and Scenic Cableway, which all over transportation up and down the mountain. The Zig Zag Railway, a historic steam-powered railway near Lithgow is another fun attraction.

Plenty of activities here are also family-friendly. The Toy and Railway museum is just one option (in addition to all of the hiking options mentioned earlier). For more ideas, check out this guide to a family-friendly weekend trip to the Blue Mountains.

The Edge Cinema in Katoomba also offers IMAX movies, one of which is a documentary about the Blue Mountains which shows fairly regularly.

You will have no trouble finding food in the Blue Mountains. With a wide selection of restaurants to choose from, one can expect a high standard of dining. Many cafes and restaurants are family-run, offering opportunities to meet the locals, while a number of restaurants and bars can also be found within the hotels that reside in and around the mountains. Sit back and enjoy an Australian wine and delicious native food while taking in the mountain views, or simply kick back with pizza for a cozy night inside amidst the chill of mountain air. Generally, there is a wide variety, and the best food options will be found in the towns of Katoomba, Springwood, and Leura.

By plane, the closest major airport is in Sydney which is served by a large number of international airlines. From the airport by car, one can take the M4 which turns into the Great Western Highway (A32), all the way to Katoomba in just under two hours. Be aware that city traffic will be high on Friday evenings and Sunday afternoons, when most people travel for the weekend.

By train, CityRail trains run every hour or two to the Blue Mountains from Sydney Central. The train will get you to the mountains; however, you will need another mode of transportation once you get there. Most of the main towns in the mountains are linked by the rail line, from which the major tourist spots are walkable or reachable by local bus services. 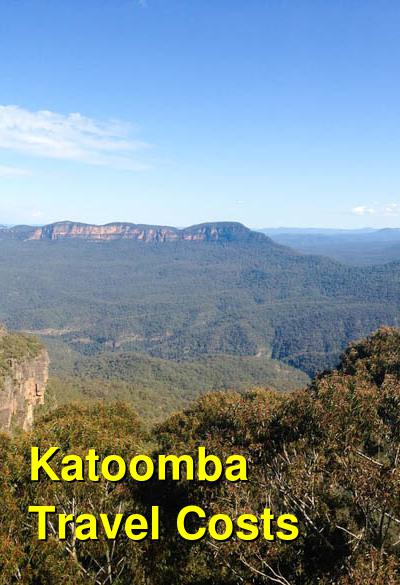