How much does it cost to travel to Wollongong?

How much money will you need for your trip to Wollongong? You should plan to spend around AU$149 ($105) per day on your vacation in Wollongong, which is the average daily price based on the expenses of other visitors. Past travelers have spent, on average, AU$37 ($26) on meals for one day and AU$48 ($34) on local transportation. Also, the average hotel price in Wollongong for a couple is AU$159 ($113). So, a trip to Wollongong for two people for one week costs on average AU$2,083 ($1,472). All of these average travel prices have been collected from other travelers to help you plan your own travel budget.

A vacation to Wollongong for one week usually costs around AU$1,041 for one person. So, a trip to Wollongong for two people costs around AU$2,083 for one week. A trip for two weeks for two people costs AU$4,165 in Wollongong. If you're traveling as a family of three or four people, the price person often goes down because kid's tickets are cheaper and hotel rooms can be shared. If you travel slower over a longer period of time then your daily budget will also go down. Two people traveling together for one month in Wollongong can often have a lower daily budget per person than one person traveling alone for one week.


How expensive is Wollongong? How much money do I need for Wollongong?

How much does a trip to Wollongong cost? Is Wollongong expensive? The average Wollongong trip cost is broken down by category here. All of these Wollongong prices are calculated from the budgets of real travelers.

How much do vacation rentals cost in Wollongong? Prices vary by location, date, size of the place, and the level of luxury. See below for options.

How much does it cost to go to Wollongong? Naturally, it depends on the dates. We recommend Kayak because they can find the best deals across all airlines.

The price of renting a car in Wollongong will depends on dates, the type of car, the location, and your age. We recommend Kayak because they can find the best deals across all car rental companies.

What did other people spend on Food in Wollongong?

Typical prices for Food in Wollongong are listed below. These actual costs are from real travelers and can give you an idea of the prices in Wollongong, but your costs will vary based on your travel style.

Wollongong On a Budget 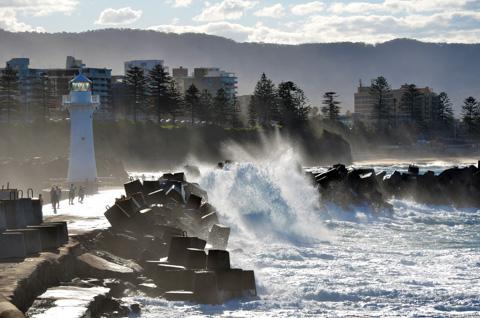 Wollongong
Wollongong is south of Sydney in New South Wales. It is also the third largest city in the state. Wollongong has a unique geography in that it is only six kilometers wide at its widest point and is forty kilometers long. It is squeezed in between the mountains and the ocean and in the process of growth, has swallowed several coastal towns between Dapto and Port Kembla. Wollongong is home to the University of Wollongong and has a diverse population that includes people of Serbian, Croatian, Italian, and Turkish descent among other nationalities. The influence of these cultures is obvious in the city's restaurant and entertainment options. Throughout the city you'll find some wonderful beaches with few crowds and some decent surfing opportunities.

In all, Wollongong has about 17 different beaches you can enjoy, particularly in the summer months when the weather is the warmest. North Beach is probably the most popular beach, but City (South) Beach has nice sand and is closer to the city center. Austinmer is a quiet cove with a small beach. You'll also find restaurants and cafes nearby. Towradgi is one of the less crowded beaches, so if you're looking for peace and quiet, head here. On the south side of the city you can choose from Port Kembla and Windang, among others.

There are great views of the city from Bulli Pass, Mount Keira Lookout, and Mount Kembla Lookout. Other sights around town include the BHP Australian Historical Flying Museum, the Science Centre and Planetarium, the Nan Tien Temple, Wollongong Botanical Gardens, and Minnamurra Rainforest.

Wollongong's inner city includes the suburbs of Wollongong and North Wollongong. It runs from Para Creek to the north to Green house Park in the south and Wollongong Hospital to the west. The central business district has a variety of shopping and entertainment venues. Flagstaff Point is to the east of the city. There is a historic colonial fort and Wollongong Breakwaster Lighthouse at the harbour. There are several beaches in central Wollongong as well, including North Beach, Puckeys Estate Reserve and Wollongong City Beach.

There are many outdoor activities that you can enjoy while you're in Wollongong. Mountain biking is popular in the area as is scuba diving. For the adventurous, you can try your hand at sky diving. There are water sports available as well.

If you're interested in shopping, there are several good malls in the area. You can find everything from budget stores to designer boutique shops. The largest malls in town include Crown St Mall, Westfield Shopping Mall, and Wollongong Central. Crown St Mall is a pedestrian mall with several large department stores and smallboutique style shops. There are also dining options available. Wollongong Central is the area's largest shopping mall with over 220 retailers. There are also many restaurants in the mall.

Wollongong has an excellent dining scene. Many of the restaurants are found on Keira Street and Corrimal Street, but there are options available in most neighborhoods. Budget options include Thai, Cambodian, Chinese, Mexican, Japanese, and vegetarian restaurants. Cafes and diners are also around with good food at reasonable prices. If you're looking for a high end dining experience then try either Lorenzo's Diner, which serves Italian cuisine, or Caveau, which serves French dishes. Reservations are recommended at both.

If you don't have access to a car, then the northern suburbs along the coast are accessible by train. Trains run hourly and, depending on the station, it is possible to walk to Wollongong's central business district and nearby beaches without taking a taxi. Buses run along a free city loop that goes through the University and city center along Cliff Road and the Princes Highway. Buses run every ten minutes during peak times and every twenty minutes during other times. Public buses are also available in many parts of town for a fee. If you're hoping to see more of Wollongong or any of the surrounding areas you really do need to have access to a car as regional public transportation is extremely limited. If you want to explore the area, there are some good bicycling routes. Some of the routes will give you some great coastal views and a wonderful tour of the area and its scenery.

By Laurie in Entertainment
You can rent a bike for around $40 a day. There's a bicycling route that runs from Wollongong north for about 10 km to Thirroul. It stretches alongside the beautiful beaches and offers great views. Alternatively you could head south to Windang and Lake Illawarra which has very few people.

If you're looking for a nice ride, take the route that covers 60 km from Bulli to Kiama alongside the coast and headlands. It's mostly off-road and very beautiful. If you're not up for the ride back, take you bike on a train to head home.