A Travel Price Comparison for France Dijon vs. Mont-Saint-Michel for Vacations, Tours, and Honeymoons

Should you visit Dijon or Mont-Saint-Michel?

Should I visit Dijon or Mont-Saint-Michel? This is a common question asked by many travelers. By figuring out which city has activities that align with your interests along with knowing which is more affordable, you'll understand where you can get more bang for your buck. So, let's dive into the details and the data, which all comes from actual travelers.

Where Should I go: Dijon or Mont-Saint-Michel?

Dijon is a city in eastern France, capital of the Cote-d'Or department and of the Bourgogne-Franche-Comte region. Archaeological finds in this area date back to the Neolithic period, but Dijon later became a Roman settlement before later becoming home to the Dukes of Burgundy between the 11th and 15th centuries. Dijon was a place of tremendous wealth and power, one of the great European centers of art, learning and science. The city has retained varied architectural styles from many of the main periods of the past millennium, including Capetian, Gothic, and Renaissance. Many still-inhabited town houses in the city's central district date from the 18th century and earlier. Dijon is famous for Dijon mustard which originated in 1856, when Jean Naigeon of Dijon substituted verjuice, the acidic green juice of not-quite-ripe grapes, for vinegar in the traditional mustard recipe. Dijon is one of France's most appealing cities. Filled with elegant medieval and Renaissance buildings, the lively center is wonderful for strolling, especially if you like to mix your cultural enrichment with excellent food, fine wine and shopping.

Which city is cheaper, Mont-Saint-Michel or Dijon?

The average daily cost (per person) in Dijon is €122, while the average daily cost in Mont-Saint-Michel is €125. These costs include accommodation (assuming double occupancy, so the traveler is sharing the room), food, transportation, and entertainment. While every person is different, these costs are an average of past travelers in each city. What follows is a categorical breakdown of travel costs for Dijon and Mont-Saint-Michel in more detail.

Compare Hotels in Dijon and Mont-Saint-Michel

Looking for a hotel in Dijon or Mont-Saint-Michel? Prices vary by location, date, season, and the level of luxury. See below for options and compare which is best for your budget and travel style.

Is it cheaper to fly into Dijon or Mont-Saint-Michel?

Prices for flights to both Mont-Saint-Michel and Dijon change regularly based on dates and travel demand. We suggest you find the best prices for your next trip on Kayak, because you can compare the cost of flights across multiple airlines for your prefered dates.

Tours and Activities in Dijon

Some specific costs of activities, tours, and entrance tickets for Dijon are as follows:

Sample the Local Flavors in Dijon

Some specific costs for nightlife related activities in Dijon:

When comparing the travel costs between Dijon and Mont-Saint-Michel, we can see that Mont-Saint-Michel is more expensive. However, the two cities are actually relatively comparable in price, as the difference is somewhat minimal. Generally, this means that you could travel with generally the same travel style and level of luxury in each place. Since both cities are in Europe, it's no surprise that their costs are relatively close, as many destinations here have somewhat similar travel prices overall.


When is the best time to visit Dijon or Mont-Saint-Michel?

Should I visit Dijon or Mont-Saint-Michel in the Summer?

The summer attracts plenty of travelers to both Dijon and Mont-Saint-Michel.

Should I visit Dijon or Mont-Saint-Michel in the Autumn?

The autumn brings many poeple to Dijon as well as Mont-Saint-Michel.

Should I visit Dijon or Mont-Saint-Michel in the Winter?

Both Mont-Saint-Michel and Dijon are popular destinations to visit in the winter with plenty of activities.

Should I visit Dijon or Mont-Saint-Michel in the Spring?

Both Mont-Saint-Michel and Dijon during the spring are popular places to visit.

Typical Weather for Mont-Saint-Michel and Dijon 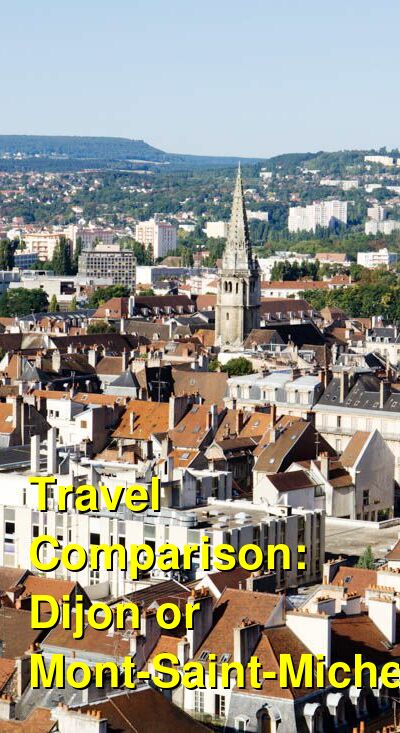