How much does it cost to travel to Mont-Saint-Michel?

Find a hostel, guesthouse, or B&B in Mont-Saint-Michel

How much does it cost to go to Mont-Saint-Michel? Naturally, it depends on the dates. We recommend SkyScanner because they can find the best deals across all airlines.

The price of renting a car in Mont-Saint-Michel will depends on dates, the type of car, the location, and your age. We recommend SkyScanner because they can find the best deals across all car rental companies.

Mont-Saint-Michel On a Budget

Mont Saint Michel, Normandy, France
Mont Saint-Michel is an island community in Normandy, France. It is located about a half of a mile (or one kilometer) off of the country's northwest coast, at the mouth of the Couesnon River near Avranches. The population of the island, at last count, was just under 50 people. The island has been a strategic fortifications since ancient times and since the 8th century AD has been the seat of the monastery from which it was named. The structural composition of the town exemplifies the feudal society that constructed it: on top, God, the abbey and monastery; below, the great halls; then stores and housing; and at the bottom, outside the walls, houses for fishermen and farmers. One of France's most recognizable landmarks, visited by more than 3 million people each year, Mont Saint-Michel and its bay are on the UNESCO list of World Heritage Sites. Over 60 buildings within the commune are protected in France as historical monuments.

The main sight to see in Mont St Michel is the Abbey of Mont St. Michel. It was once just a small, humble monetary, the island and its fortifications have effectively grown up around this. During the French Revolution, the abbey was used as a prison, and an extensive restoration was required to restore it. A few prison-era showpieces, like the human hamster wheel used to lift supplies in and out of the complex, have been kept.

Another sight is the Notre-Dame Sous Terre Chapel. The Carolingian church named Chapelle Notre-Dame-sous-Terre (Our Lady underground) was built around 966 by the first Benedictine monks at the very place of the oratory erected by Saint-Aubert in the early 8th century. The Mont also has 4 museums to check out and old, quaint houses and buildings.

The Mont Saint Michel is not just a church on a rock. It is a whole medieval city, but a very small one, so there is really only one neighborhood area, which is the entire city of the Mont. It is one of the few places in France to have preserved its medieval walls and defenses intact. The city, though small, has inhabitants to this day- though not many live there full time- and a mayor, and in addition to its religious monuments, has old houses, narrow streets, hotels, restaurants and shops, all catering for the over-a-million tourists who come to visit this magnificent site each year.

Mont St. Michel hosts a few big events each year. One of which is the classical musical concerts, which are held in the abbey and the 13 centuries between sky and sea festival, which occurs annually at the end of July. This festival is a reminder to all of the site's Christian nature. The Mont Saint-Michel and the Bay are above all a spiritual center for events such as the annual pilgrimages and the important religious celebrations organized by the Fraternites Monastiques de Jerusalem.

In addition to the festival and concerts, there are also many activities in the Bay of the Mont St. Michel. Whether you prefer land, air, or sea, the Bay has something for everyone. You can take a hot air balloon ride, go canoeing or kayaking, or take a ride on horseback if you're more of a land person. There is also a couple of areas in the bay to view and interact with animals: the Champrepus Zoo and the Alligator Bay, which is popular among younger visitors. The Parc de l'Ange Michel adventure park in the River Selune Valley offers activities for all ages. And of course you can enjoy the many sandy beaches, considered some of the best in Normandy and Brittany.

Mont St. Michel does have some of its own specialties when it comes to food and dining. One specialty that the Mont is famous for is its omelets, which are whipped until frothy and light. Another specialty dish to watch for is the saltmarsh lamb, which are any of the dishes made from the sheep that wander the coast.

There are many restaurant options available on Mont St. Michel. One of the most economical options on the island is Du Guesclin. It features the locally popular omelets as well as some of the saltmarsh lamb dishes, and it also has some great oyster dishes. Another slightly more expensive restaurant is the La Mere Poulard, which can be found right at the entrance to the Mont and is world famous for its omelets. They have a big selection of omelets and include many with nontraditional ingredients and cook them right in the window of the restaurant. This place fills up fast, however, so reservations are highly recommended if you'd like to get in here. And they only serve omelets during certain hours of the day, so be sure to check on the times before scheduling a reservation.

Mont Saint-Michel is not a large island, so there are no airports or train services to get here. The easiest and cheapest way is probably by renting a car, though it is possible to take a train from Paris to Pontorson and then to catch a bus for the remainder of the trip on out to Mont Saint Michel. If you drive, you will have to park in one of the large car parks about a mile from the actual entry, but there is a free shuttle that will take you on into the island area. There are no vehicles allowed within the fortress, so the only way to get around on the Mont is on foot. 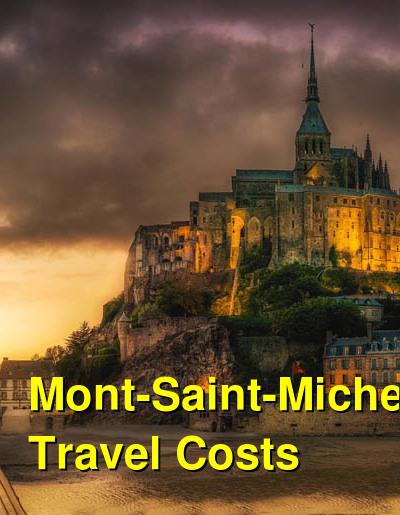