A Travel Price Comparison for China Henan vs. Hebei for Vacations, Tours, and Honeymoons

Should you visit Henan or Hebei?

Trying to figure out where to travel next? This travel cost comparison between Henan and Hebei can help. For many travelers, the cost of a destination is a primary consideration when choosing where to go.

Amidst verdant mountainscapes and ancient pagoda temples, a rich heritage and profound history hangs an enchanting air of the landscape. The Henan Province is a central province to the nation. Often referred to as Zhongyuan or Zhongzhou, the name of the province means "central plain land" or "midland." The Henan Province was the bud of the nation that grew into a beautiful blossom that became China today. Over 3,000 years ago, the Henan Province was where the Chinese people laid down their civilization and remained the central hub of China's economy, politics, and culture for over 1,000 years. Many of the ruins of varying dynasties have been maintained throughout the centuries, such as the Yin, Shaolin Temple, and four of the eight great ancient capitals of the nation, Luoyang, Anyang, Kaifeng, and Zhengzhou. The Henan Province remained important geographically throughout the centuries because of its proximity to the Yellow River. Even the literal name of the province, pronounced Huang He, means "south of the Yellow River." Some of the neighboring provinces include Shaanxi, Shanxi, Hebei, Shandong, Anhui, and Hubei. With a population of 94 million, Henan is China's third most populated province. While considered one of the less developed provinces of China, the Henan Province is still a beautiful landscape with a historically significant background. If you are a lover of history, beauty, or culture, the "Chinese North Plain" is the place to be!

Which city is cheaper, Hebei or Henan?

The average daily cost (per person) in Henan is $76, while the average daily cost in Hebei is $69. These costs include accommodation (assuming double occupancy, so the traveler is sharing the room), food, transportation, and entertainment. While every person is different, these costs are an average of past travelers in each city. Below is a breakdown of travel costs for Henan and Hebei in more detail.

Double occupancy rooms typically run around $78 in Hebei For nicer amenities and a premiere location, you can expect to pay a bit more.

While meal prices in Henan can vary, the average travelers spends about $22 per day on food. Based on the spending habits of previous travelers, when dining out, an average meal in Henan should cost around $8.80 per person. Breakfast prices are usually a little cheaper than lunch or dinner. The price of food in sit-down restaurants in Henan is often higher than fast food prices or street food prices.

The average traveler spends about $17 per day in Hebei for food, but obviously this is dependent on the type of restaurant and the amount of food ordered. To save money you can grab a lighter lunch or dinner, or you can try fast food or street food.

Also, here are some specific examples of food and dining related activities in Henan.

For Hebei, here are some samples of tours and activities related to meals and dining experiences:

The cost of a taxi ride in Henan is significantly more than public transportation. On average, past travelers have spent $42 per person, per day, on local transportation in Henan.

Public transportation tends to be much less expensive in Hebei than paying for a taxi or private car service, as is expected. Typically, people spend $24 on transportation in Hebei on average per day.


Hired Cars and Shuttles in Henan

Some specific examples of transportation prices in Henan:

Hired Cars and Shuttles in Hebei

Also for Hebei, here are a few examples of actual transportation services:

Is it cheaper to fly into Henan or Hebei?

Prices for flights to both Hebei and Henan change regularly based on dates and travel demand. We suggest you find the best prices for your next trip on Kayak, because you can compare the cost of flights across multiple airlines for your prefered dates.

Entertainment and activities in Henan typically cost an average of $7.36 per person, per day. This includes fees paid for admission tickets to museums and attractions, day tours, and other sightseeing expenses.

Sightseeing expenses in Hebei, including the cost of admission tickets for day tours, museums, and attractions, usually cost an average of $3.90 per day, per person.


Tours and Activities in Henan

Some specific costs of activities, tours, and entrance tickets for Henan are as follows:

Tours and Activities in Hebei

For Hebei, here are a few prices for actual activities, tours, and tickets provided by various companies:

The average person spends about $5.37 on alcoholic beverages in Henan per day. The more you spend on alcohol, the more fun you might be having despite your higher budget.


When comparing the travel costs between Henan and Hebei, we can see that Henan is more expensive. However, the two cities are actually relatively comparable in price, as the difference is somewhat minimal. Generally, this means that you could travel with generally the same travel style and level of luxury in each place. Since both cities are in Asia, it's no surprise that their costs are relatively close, as many destinations here have somewhat similar travel prices overall. 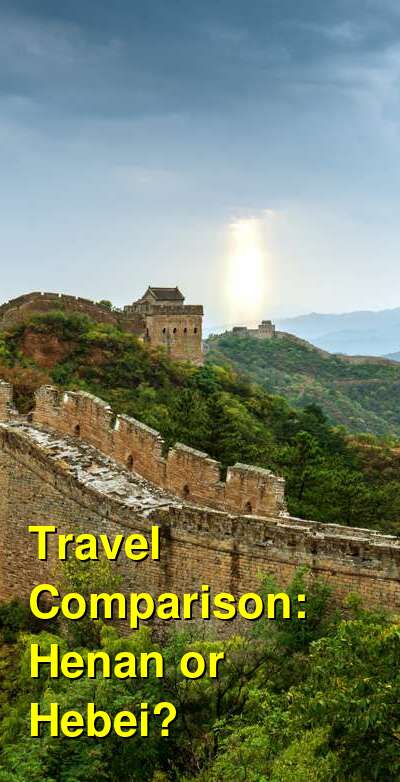