A Travel Comparison for Vacations, Honeymoons, and Tours Indonesia vs. Laos

Should you visit Indonesia or Laos?

When planning a trip through Southeast Asia, many travelers are deciding between which countries to visit based on cost. But cost should only be one factor when comparing Laos with Indonesia, because these two countries offer vastly different experiences.

Laos is one of the cheapest places in the world to visit, and is known for adventure travel, ecotourism, and its laid back atmosphere. For all of these reasons, and the low cost, it is very popular with the backpacking crowd. However, in recent years it has seen more of an influx of higher-end tourists looking for ecological wonders in the mostly untouched jungles of this tropical nation.

Which country is cheaper, Laos or Indonesia?

Should I visit Indonesia or Laos? This is a popular question for many travelers. By figuring out which country is more expensive, you'll understand where you'll get more bang for your buck. A week in Laos can cost you about $108 (per person), while a week in Indonesia may cost you around $341. These differences become even more noticable if you plan to spend a longer time in the country. 10 days, two weeks, or even one month of travel to Laos or Indonesia can really add to your travel budget.

When comparing food in Indonesia vs. Laos they are not just different in cuisine, but also in price. Meal and restaurant costs in Indonesia ($13) are often cheaper than Laos ($5.94).


How much are flights to Indonesia and Laos?


Find a Hostel in Indonesia or Laos

When is the best time to visit Indonesia and Laos?

Lombok
Much of Indonesia is very close to the equator and quite tropical. Therefore, the seasons are divided between wet and dry depending on seasonal winds. The dry season is from May to September, while the wet season is from October to April. A few places have an exception to this (such as Sumatra), but you can expect warm tropical temperatures everywhere in the country.

Laos is warm year-round. The dry season is from October to April, and the wet season is in the summer months. However, don't expect the wet season to dump continuous rain on you, meaning that even in the rainier months travelers don't need to worry about the weather so much. Even still, the "high season" tends to be the dryer times of the year.

Why is Indonesia more expensive than Laos?

Laos, being one of the poorest countries in the world, has lower prices for generally everything in the tourism industry compared to its Southeast Asian neighbors. Its reliance on backpackers for so long has also left the country with a large number of hostels and budget hotels, adding even more competition to already low prices. And as much of the country's economy is based on agriculture, this means that food is also fairly cheap. In some places, transportation can get a little pricey, but overall, Laos is just plain cheap.

What are the most expensive and cheapest cities and regions in Indonesia and Laos? 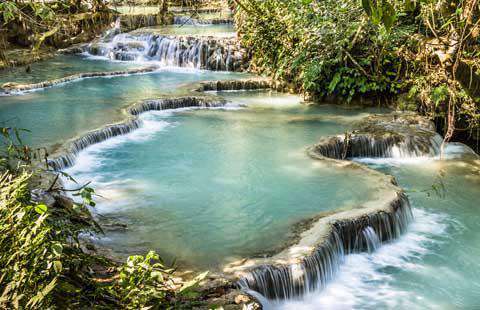 Luang Prabang, Laos
Tourism has driven up prices in some areas of Indonesia, namely Bali, Lombok, and some of the surrounding islands known for their beaches and scenery. If other travelers are flocking to an area, then expect prices to be higher.

Laos is fairly consistent in prices all over the country, as everything is cheap. However, if you plan to do a lot of activities or tours, this can add to your budget. Tours into the countryside to visit the jungle or nearby wilderness areas tend to add more to the budget of travelers.

The cities and towns of Laos tend to be cheap due to the readily available food and accommodation options, as well as more variety and competition. In the countryside, prices can be very cheap, especially in off-the-beaten path locations.

If you're looking for more luxury, such as a nicer hotel or high-end restaurant, then expect to pay significantly more than the budget or mid-range options.

How you can save money when visiting Indonesia and Laos?

Negotiate for prices, as locals often try to hike up the prices of food and services for tourists. Shop around and know what things should really cost before you commit to purchasing something.

Eat local, shop local, and stay local to save money. While Laos is not necessarily known for chains and large companies, they do exist in some places but are more expensive. Chains are also common in the much larger Indonesia, so compare prices and shop around.

Travel slow. Transportation is one of the highest expenses, so picking a destination and maximizing all activities while there will keep prices down. 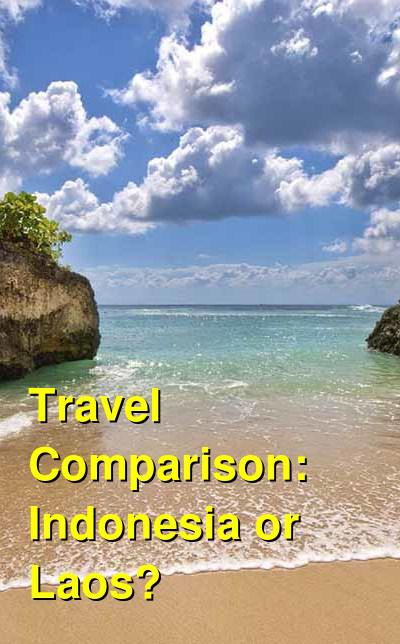