A Travel Price Comparison for France Saint-Tropez vs. Biarritz for Vacations, Tours, and Honeymoons

Should you visit Saint-Tropez or Biarritz?

Should I visit Saint-Tropez or Biarritz? This is a common question asked by many travelers. By figuring out which city has activities that align with your interests along with knowing which is more affordable, you'll understand where you can get more bang for your buck. So, let's dive into the details and the data, which all comes from actual travelers.

Biarritz is an elegant seaside town on southwestern France's Basque coast that has been a popular resort since European royalty started visiting the area in the 1800s. It is located on France's Atlantic Coast in the Bay of Biscay. Half ritzy coastal resort, half summer surfer's hang-out, the seaside resort of Biarritz has been a favorite seaside getaway ever since Napoleon III and his Spanish-born wife Eugenie arrived during the mid-19th century. To entertain her court, the empress built a grand palace, which is now a luxurious hotel with a Michelin-starred restaurant. Other than this exquisite villa by the sea, the names of the streets in Biarritz also hint at the city's royal past: Avenue de l'Imperatrice, Avenue de la Reine Victoria, and Esplanade Elizabeth II. Mansions decked with steeples and spectacular windows recall the city's 19th-century splendors. Though the royal influence of Biarritz has faded, the city is still a popular tourist destination for those looking for a classic summer holiday. Pristine sandy beaches, beautiful coastal villas, and stylish restaurants offer a sophisticated ambience. Wide seafront promenades and well-placed benches allow visitors to soak up the stunning natural landscape. Biarritz is also the capital of surfing in Europe.

Which city is cheaper, Biarritz or Saint-Tropez?

The average daily cost (per person) in Saint-Tropez is €118, while the average daily cost in Biarritz is €105. These costs include accommodation (assuming double occupancy, so the traveler is sharing the room), food, transportation, and entertainment. While every person is different, these costs are an average of past travelers in each city. What follows is a categorical breakdown of travel costs for Saint-Tropez and Biarritz in more detail.

Hired Cars and Shuttles in Biarritz

Also for Biarritz, here are a few examples of actual transportation services:

Is it cheaper to fly into Saint-Tropez or Biarritz?

Prices for flights to both Biarritz and Saint-Tropez change regularly based on dates and travel demand. We suggest you find the best prices for your next trip on Kayak, because you can compare the cost of flights across multiple airlines for your prefered dates.

For Biarritz, here are some samples of tours and activities related to meals and dining experiences:

Tours and Activities in Biarritz

For Biarritz, here are a few prices for actual activities, tours, and tickets provided by various companies:

When comparing the travel costs between Saint-Tropez and Biarritz, we can see that Saint-Tropez is more expensive. However, the two cities are actually relatively comparable in price, as the difference is somewhat minimal. Generally, this means that you could travel with generally the same travel style and level of luxury in each place. Since both cities are in Europe, it's no surprise that their costs are relatively close, as many destinations here have somewhat similar travel prices overall. 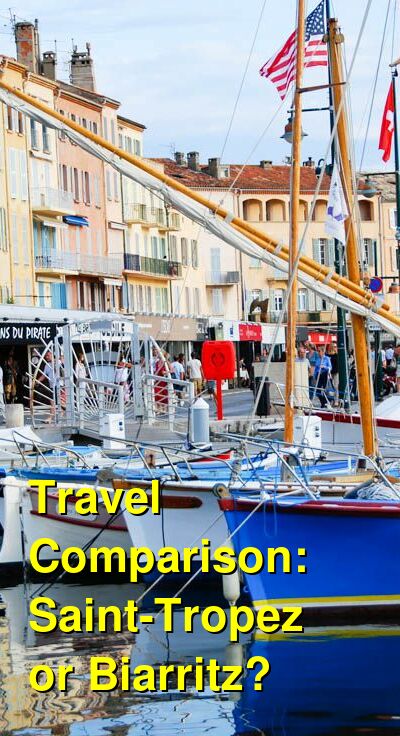