How much does it cost to travel to Biarritz?

How much money will you need for your trip to Biarritz? You should plan to spend around €105 ($111) per day on your vacation in Biarritz, which is the average daily price based on the expenses of other visitors. Past travelers have spent, on average, €27 ($29) on meals for one day and €31 ($33) on local transportation. Also, the average hotel price in Biarritz for a couple is €118 ($125). So, a trip to Biarritz for two people for one week costs on average €1,470 ($1,553). All of these average travel prices have been collected from other travelers to help you plan your own travel budget.

A vacation to Biarritz for one week usually costs around €735 for one person. So, a trip to Biarritz for two people costs around €1,470 for one week. A trip for two weeks for two people costs €2,940 in Biarritz. If you're traveling as a family of three or four people, the price person often goes down because kid's tickets are cheaper and hotel rooms can be shared. If you travel slower over a longer period of time then your daily budget will also go down. Two people traveling together for one month in Biarritz can often have a lower daily budget per person than one person traveling alone for one week.


How expensive is Biarritz? How much money do I need for Biarritz?

How much does a trip to Biarritz cost? Is Biarritz expensive? The average Biarritz trip cost is broken down by category here. All of these Biarritz prices are calculated from the budgets of real travelers.

How much do vacation rentals cost in Biarritz? Prices vary by location, date, size of the place, and the level of luxury. See below for options.

How much does it cost to go to Biarritz? Naturally, it depends on the dates. We recommend Kayak because they can find the best deals across all airlines.

The price of renting a car in Biarritz will depends on dates, the type of car, the location, and your age. We recommend Kayak because they can find the best deals across all car rental companies.

Biarritz On a Budget 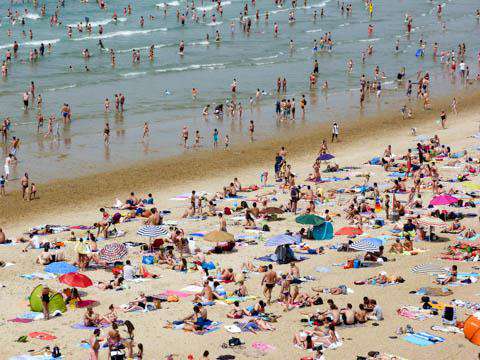 Biarritz, France
Biarritz is an elegant seaside town on southwestern France's Basque coast that has been a popular resort since European royalty started visiting the area in the 1800s. It is located on France's Atlantic Coast in the Bay of Biscay. Half ritzy coastal resort, half summer surfer's hang-out, the seaside resort of Biarritz has been a favorite seaside getaway ever since Napoleon III and his Spanish-born wife Eugenie arrived during the mid-19th century. To entertain her court, the empress built a grand palace, which is now a luxurious hotel with a Michelin-starred restaurant. Other than this exquisite villa by the sea, the names of the streets in Biarritz also hint at the city's royal past: Avenue de l'Imperatrice, Avenue de la Reine Victoria, and Esplanade Elizabeth II. Mansions decked with steeples and spectacular windows recall the city's 19th-century splendors. Though the royal influence of Biarritz has faded, the city is still a popular tourist destination for those looking for a classic summer holiday. Pristine sandy beaches, beautiful coastal villas, and stylish restaurants offer a sophisticated ambience. Wide seafront promenades and well-placed benches allow visitors to soak up the stunning natural landscape. Biarritz is also the capital of surfing in Europe.

There is plenty to see in Biarritz. One of the most popular is the Rocher de la Vierge (Virgin of the Rock). It is one of Biarrtiz' most dramatic sites, set on a steep, narrow rock in the ocean. The site is accessible by an iron bridge built by the Gustave Eiffel workshops. As the focal point, a statue of the Virgin Mary stands on top of the rock, looking out towards the sea. From this monument, visitors can take in a magnificent panorama of the coastline extending from the mouth of the Adour River to the Spanish frontier.

Another popular sight is the Chapelle Imperiale. When the Empress Eugenie arrived in Biarritz, she requested that an Imperial Chapel be built for her spiritual worship. Constructed in 1864, this intimate chapel has an enchanting Byzantine and Moorish interior featuring exquisite gilded mosaics. The chapel is dedicated to the Virgin of Guadalupe (the Mexican Black Madonna). Visitors can take a guided tour to learn more about the history and inspiration of the chapel.

Because Biarritz isn't very big, the only real neighborhood that tourists visit is the city center. It is located right near/on the beach, which is the main attraction of the area. It is also here where you will find almost all of the hotels, restaurants, shops, and attractions such as museums and other popular sights.

There's plenty to do in Biarritz. Whether you enjoy shopping at boutiques or want to try something a little more adventurousâ¦ like taking lessons from one of the many surf schools in the area. The most popular and common activity in the area is spending some time on the beach and admiring the sandy coast line. This is what many tourists come to this area for, but there are also markets, shops, and plenty of museums to explore.

One unique and exciting activity is the Cite de l'Ocean, which is part museum, part theme park, part educational center. It takes a fun approach to learning about the sea in all its forms â attractions range from a chance to explore a marine lab to a simulated dive into the depths in an underwater bathysphere.

Local Basque cuisine is always based around high quality, local ingredients in season rather than elaborate sauces or spice combinations The Basque people have a long history of seafaring and the fish here is unbeatable. Cod, hake and fresh tuna are popular, when the Oysters are in season they sell out fast. Wild game, hams and mushrooms are all popular staple local cuisine. For a few restaurant ideas try: Le Kaiku, which is the oldest house in town and serves local dishes; Chez Maya, which has excellent fish soup and paella; and Cafe Jean, which overlooks the market and serves excellent pinchos (which is very similar to a tapa).

The nearest major airport to Biarritz is the Paris international airport. From Paris, it is easy to get to Biarritz on public transportation such as high speed trains or TGV. Biarritz is well connected to other nearby town and cities via various trains and busses. The town itself is not very big, so it is possible to get to most places by walking, but Biarritz does have a great public bus system.