How much does it cost to travel to Saint-Tropez?

How much money will you need for your trip to Saint-Tropez? You should plan to spend around €118 ($135) per day on your vacation in Saint-Tropez, which is the average daily price based on the expenses of other visitors. Past travelers have spent, on average, €30 ($35) on meals for one day and €27 ($31) on local transportation. Also, the average hotel price in Saint-Tropez for a couple is €138 ($158). So, a trip to Saint-Tropez for two people for one week costs on average €1,658 ($1,893). All of these average travel prices have been collected from other travelers to help you plan your own travel budget.

How much do vacation rentals cost in Saint-Tropez? Prices vary by location, date, size of the place, and the level of luxury. See below for options.

How much does it cost to go to Saint-Tropez? Naturally, it depends on the dates. We recommend Kayak because they can find the best deals across all airlines.

The price of renting a car in Saint-Tropez will depends on dates, the type of car, the location, and your age. We recommend Kayak because they can find the best deals across all car rental companies.

Saint-Tropez On a Budget 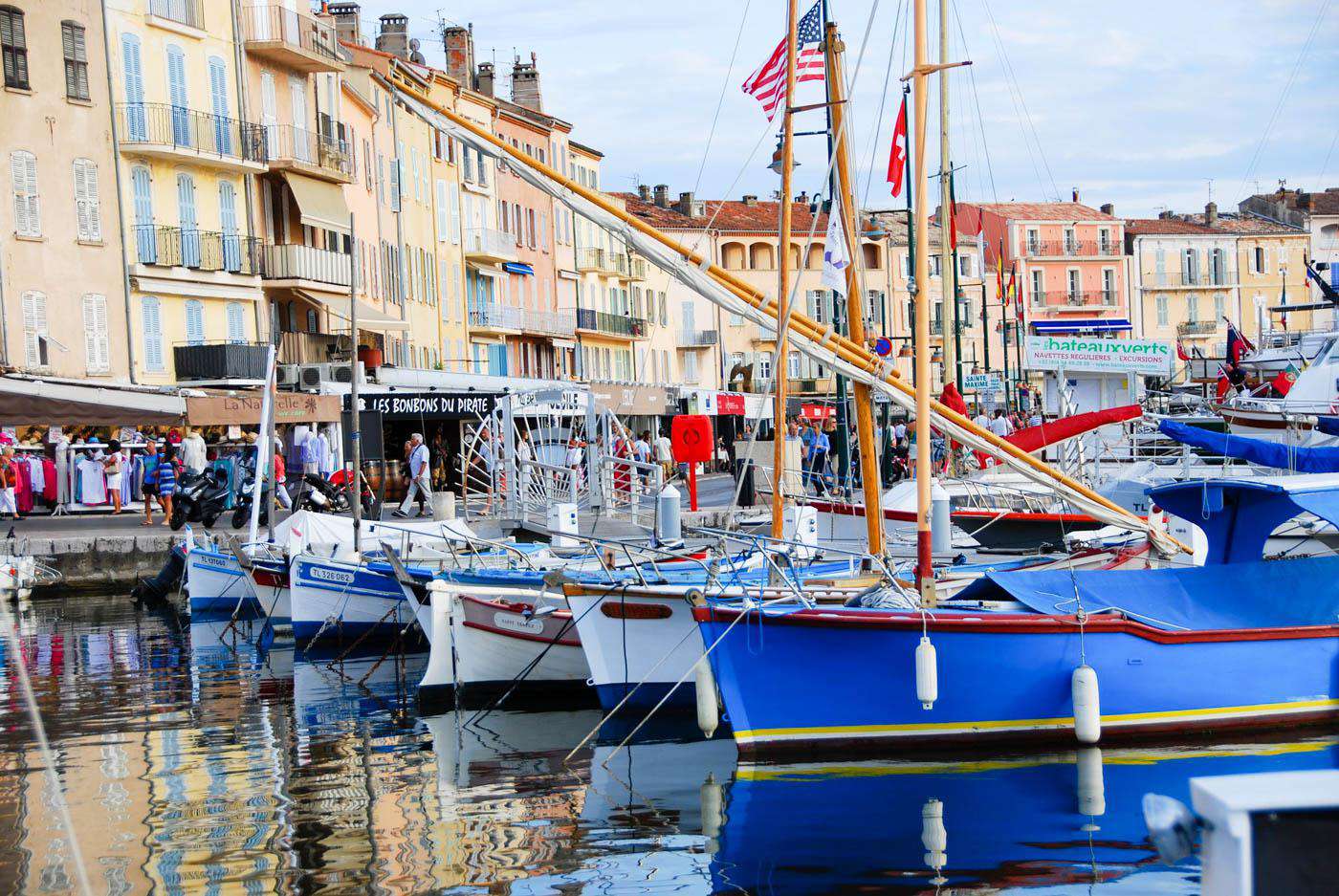 Saint-Tropez, France
Saint-Tropez is a town in southern France west of Nice, in the Var department of the Provence-Alpes-Cote d'Azur region. Saint-Tropez is located on the French Riviera. It was a military stronghold and a fishing village until the beginning of the 20th century. It was the first town on this coast to be liberated during World War II (as part of Operation Dragoon). After the war, it became an internationally known seaside resort, renowned principally because of the influx of artists of the French New Wave in cinema and the Ye-ye movement in music. It later became a resort for the European and American holiday and a goal for tourists in search of a little Provencal authenticity and an occasional celebrity sighting.

Sweet-chiming Eglise de St-Tropez is a quintessential St-Trop landmark, built in 1785 in Italian baroque style. Inside is the bust of St Torpes, honoured during Les Bravades des Espagnols.

Much of the top sights in Saint Tropez is the area itself with the beautiful beaches and harbor town, but there is plenty more here to see as well. One major sight is the Citadelle de St. Tropez. Built in 1602 to defend the coast against Spain, the citadel dominates the hillside overlooking St-Tropez to the east. The views are fantastic. Its dungeons are home to the excellent Musee de l'Histoire Maritime, an all-interactive museum inaugurated in July 2013 retracing the history of humans at sea, from fishing, trading, exploration, travel and the navy.

In La Ponche, Saint Tropez's old fishing quarter, you can get away of some of the hustle and bustle of the busier areas and enjoy a stroll, taking in some sight such as the Eglesi de St. Tropez, a St-Trop landmark built in 1785 in Italian baroque style. Inside is a bust of St Torpes, honored during Les Bravades in May. Then follow rue du Portail Neuf south to Chapelle de la Misericorde, built in 1645 with a pretty bell tower and colorful tiled dome.

The Place des Lices, St-Tropez' legendary and very charming central square, is studded with plane trees, cafes and petanque players. Simply sitting on a cafe terrace watching the world go by or jostling with the crowds at its extravaganza of a twice-weekly market, jam-packed with everything from fruit and vegetables to antique mirrors and sandals, is an integral part of the St-Tropez experience.

Saint-Tropez has a couple of exciting events each year. Les Bravades de Saint-Tropez is an annual celebration held in the middle of May where people of the town celebrate their patron saint Torpes of Pisa and their military achievements. One of the oldest traditions of Provence, it has been held for more than 450 years, since the citizens of St Tropez were given special permission to form a militia in order to protect the town from the Barbary pirates. During the three-days celebration, the various militias in costumes of the time, fire their muskets into the air at traditional stops, march to the sound of bands, and parade St Tropez's bust. The townspeople also attend to a mass wearing traditional Provencal costume.

The other event, Les Voiles de Saint Tropez, is held at the end of each September. It is a regatta in the bay area. This is a draw for many yachts, some up to 50 meters in length. Many tourists come to the location for this event.

You could also visit one of the town's fantastic museums, including the all interactive history museum. Or maybe rent a yacht for the day or go for a boat ride. There are plenty of exciting things to do in Saint Tropez.

Saint Tropez has plenty of great dining options and it can be hard to decide what to try, but there are a few dishes the area is well-known for, including: Bouillabaisse, Riviera, which is a fish stew; Gateau des Rois, which is the cake of Kings; and Tarte Tropez, which is the one and only sponge cake made in Tropez. A few restaurant ideas to help you get started include: Hotel de La Ponche, a great place for seafood lovers; Le Sporting, for some great locally sourced traditional French meals; and Table du Marche, a contemporary bistro and gourmet bakery.

The closest main airport is in Nice, but flights into Nice are limited, so Lyon may be a better option. Saint Trope does not have any rail stations, but it is possible to take the rail to nearby towns such as Saint Raphael and then take a bus from there into Saint Tropez. Driving is probably the easiest way to get into Saint Tropez, but be aware that during the busy summer season, the roads can be very busy. Public transport in Saint-Tropez includes mini buses, which maintain a shuttle service between town and Pampelonne beaches. Other means of transport include scooters, cars, bicycles and taxis. There are also helicopter services, and boat trips. Because of traffic and short distances, walking is an obvious choice for trips around town and to the Tropezian beaches.