How much does it cost to travel to La Rochelle?

How much money will you need for your trip to La Rochelle? You should plan to spend around €91 ($108) per day on your vacation in La Rochelle, which is the average daily price based on the expenses of other visitors. Past travelers have spent, on average, €28 ($33) on meals for one day and €14 ($16) on local transportation. Also, the average hotel price in La Rochelle for a couple is €107 ($127). So, a trip to La Rochelle for two people for one week costs on average €1,272 ($1,508). All of these average travel prices have been collected from other travelers to help you plan your own travel budget.

A vacation to La Rochelle for one week usually costs around €636 for one person. So, a trip to La Rochelle for two people costs around €1,272 for one week. A trip for two weeks for two people costs €2,543 in La Rochelle. If you're traveling as a family of three or four people, the price person often goes down because kid's tickets are cheaper and hotel rooms can be shared. If you travel slower over a longer period of time then your daily budget will also go down. Two people traveling together for one month in La Rochelle can often have a lower daily budget per person than one person traveling alone for one week.

How much does a trip to La Rochelle cost? Is La Rochelle expensive? The average La Rochelle trip cost is broken down by category here. All of these La Rochelle prices are calculated from the budgets of real travelers.

Find a hostel, guesthouse, or B&B in La Rochelle

How much does it cost to go to La Rochelle? Naturally, it depends on the dates. We recommend SkyScanner or Kayak because they can find the best deals across all airlines.

La Rochelle On a Budget

La Rochelle, France
La Rochelle is a lovely French city in the province of Charente-Maritime. It's located in western France and is a seaport on the Bay of Biscay. Most people who visit the city enjoy exploring the "Vieux Port" or Old Harbour area. This area is the heart of the city and it is a beautiful neighborhood that has many seafood restaurants and nice architecture. It's particularly enjoyable to walk around during the evening hours. Ile de Re is connected to the city by a bridge and is also a nice place to visit. If you head out of town, the surrounding countryside is very rural. North of the city is Venise Verte, which is very marshy and has many small canals. It's a popular area for inland boating.

La Rochelle has an Oceanic climate that is relatively mild due to the effects of the Gulf Stream waters. Temperatures are usually moderate and it is rarely extremely cold or extremely hot. Summers are usually dry and sunny while winters are mild and wet.

The most interesting and scenic part of La Rochelle is the Old Port area, called Vieux Port. The area has a very Mediterranean atmosphere and the historic buildings have been constructed with pale stones and the streets are narrow and cobblestone. In the Old Port area make sure you visit the three towers, Tour Saint Nicolas, Tour de la Chaine and Tour de la Lanterne. These three towers guard the harbor area as they have since medieval times. It is possible to climb to the top and they offer a good view of the area.

The city also has a lovely aquarium that you can easily reach from the harbor. It's a great activity if it's raining outside and you can easily spend several hours exploring the facility. Port des Minimes is also an interesting place to see some exotic and impressive boats.

Most tourists spend their time in the Old Harbour, or Vieux Port area. This is a pedestrian only neighborhood that has many of the city's best restaurants and nightlife options. Much of the city's history has been preserved in this area as well, including the old city walls and fort.

It's also worth visiting Ile de Re, which is just off the shore and connected to La Rochelle by a bridge. This interesting little island has some nice beaches and good cuisine.

It's enjoyable to wander around the Old Harbor, or Old Port area in the early evening when everybody is out and about. Also make sure you take at least one boat ride to the nearby islands as the ride itself is quite enjoyable and the islands are nice to explore. If you have time, a trip through the nearby countryside is beautiful and interesting. There are several places outside of town worth visiting. These include the town of Lucon and the area of Marais Poitevin, or Venise Verte.

You can't go to La Rochelle without trying some seafood, as the city is famous for it. There are many excellent restaurants around town, particularly in the Vieux Port area. Dishes such as charantais, or mussels in a cream and wine sauce, are particularly good and popular. If you're looking for a traditional meal, head to "A Cote de Chez Fred", which has many local specialties. For an elegant atmosphere, try the Cafe de la Paix, which is located in a building that is designated a historic monument.

If you're on a tighter budget you can pick up some sandwiches or kebabs at Le Rif Restaurant, not far from "A Cote de Chez Fred". It's reasonably priced and won't break your bank, although not nearly as interesting as the seafood options.

You can easily explore the city on foot, or you can rent a bike through a service called les velos jaunes. There are stations around town where you can initiate the process. There is also a decent network of buses that can take you further distances. There are buses that travel towards Ile de Re, Aytre, Plage de Chatelaillon and Port des Minimes. These can be caught at the Place de Verdun.

To reach the nearby islands of Fort Boyard you can pick up a ferry in the Vieux Port. Boats also depart from Vieux Port and head directly to Port des Minimes. 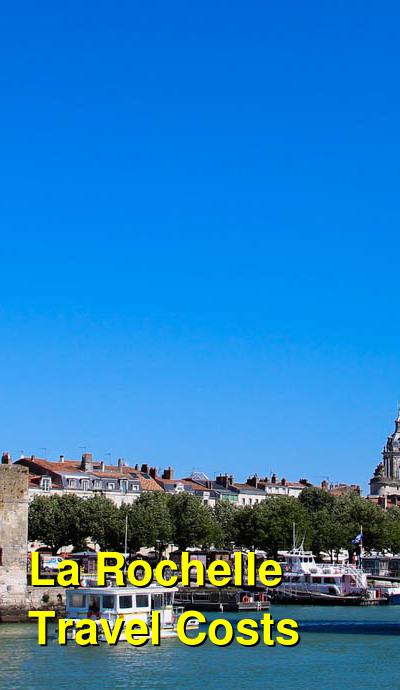 By backpackguru in Entertainment
The oldest and most interesting part of La Rochelle is the Old Port area. It has narrow roads and very old buildings that are made from stone, giving them a Mediterranean feel. Some of the main sites in the area include the Three Towers, which are the Tour St. Nicolas, Tour de la Chaine and Tour de la Lanterne. The towers actual date back to medieval times are protected the harbor.