How much does it cost to travel to Caltagirone?

How much money will you need for your trip to Caltagirone? You should plan to spend around €76 ($79) per day on your vacation in Caltagirone, which is the average daily price based on the expenses of other visitors. Past travelers have spent, on average, €25 ($26) on meals for one day and €6.86 ($7.14) on local transportation. Also, the average hotel price in Caltagirone for a couple is €94 ($98). So, a trip to Caltagirone for two people for one week costs on average €1,064 ($1,108). All of these average travel prices have been collected from other travelers to help you plan your own travel budget.

A vacation to Caltagirone for one week usually costs around €532 for one person. So, a trip to Caltagirone for two people costs around €1,064 for one week. A trip for two weeks for two people costs €2,128 in Caltagirone. If you're traveling as a family of three or four people, the price person often goes down because kid's tickets are cheaper and hotel rooms can be shared. If you travel slower over a longer period of time then your daily budget will also go down. Two people traveling together for one month in Caltagirone can often have a lower daily budget per person than one person traveling alone for one week.

How much does a trip to Caltagirone cost? Is Caltagirone expensive? The average Caltagirone trip cost is broken down by category here. All of these Caltagirone prices are calculated from the budgets of real travelers.

Looking for a hotel in Caltagirone? Prices vary by location, date, season, and the level of luxury. See below for options.

How much does it cost to go to Caltagirone? Naturally, it depends on the dates. We recommend Kayak because they can find the best deals across all airlines.

The price of renting a car in Caltagirone will depends on dates, the type of car, the location, and your age. We recommend Kayak because they can find the best deals across all car rental companies.

Caltagirone On a Budget 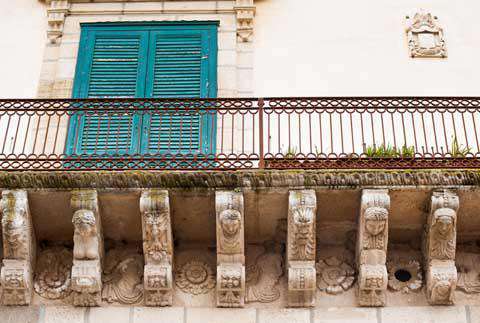 Caltagirone
Located in Central Sicily in the province of Catania, Caltagirone is a town that is most famous for its ceramics as well as its long ceramic decorated staircase. The town is just 70 kilometers southwest of the city of Catania. The ceramic industry is notable for its pottery, more specifically its maiolica and terra-cotta wares. While there is a historical base for this industry, today the production is more focused on artistic items such as ceramics and sculptures. In addition to ceramics, the town's economy is dependent upon agriculture including the production of grapes, olives and peaches.

Caltagirone has been inhabited since prehistoric times. It has been inhabited by the Sicels pre-Roman population, the Arabs, and the Ligurians among other groups. Influences from these groups remain today. The rise of the ceramic industry occurred during the Norman and Hohenstaufen rule. In 1693 the city was almost completely destroyed by an earthquake. Many buildings were reconstructed in Baroque style. Because of its interesting architecture, the city has been listed in the UNESCO World Heritage program.

The most famous landmark in the city is the 142 step Staircase of Santa Maria del Monte (La Scala). It was built in 1608 and each step is made with unique, hand decorated ceramics. It is particularly beautiful on the city's patron saint day, July 25th, when the staircase is lit up with different colored candles that recreate an artistic drawing of impressive size.

With Caltagirone's famed pottery industry, you must stop at the local Museum of Pottery. It was established in 1965 and has a good collection of both ancient and modern pottery and terra-cotta, some of which dates back to the Magna Grecia period.

Caltagirone spreads out over three different hills in the interior of Sicily. There are many impressive views that look out over the valley below. The city itself has an old town and a new town. The new town is where you will find both the train and bus stations. From there, it's about a 20 minute walk to the old town, where you will find the greatest concentration of sights and attractions.

Many people enjoy shopping for ceramics in Caltagirone. There are many shops along La Scala where you can find some interesting pieces. If you're looking to get out of town, then the bus ride to Piazza Armerina offers good views of Sicily's interior. It also offers a view across to Mount Etna.

There are some high quality restaurants located in Caltagirone. From fine dining to local pizzerias, there are options for most budgets and styles. Seafood is common in much of the cuisine. Ingredients are usually fresh and of good quality. Seasonal produce and the area's agricultural influence mean that seasonal specialties are your best options. Ask around to find out where the locals eat and you won't be disappointed.

You can reach Caltagirone by bus from Piazza Armerina, Enna and Catania. Service is regular and reliable. There are also local trains that run between Caltagirone and Gela and Catania. The city's main train and bus stations are located next to each other in the new town part of Caltagirone. It's about a 20 minute walk from the stations to the center of the old town. Some of the buses may also stop in the old town so inquire in advance. It is possible to take a bus between the old and new towns if you don't wish to walk. A taxi may be your best option though as bus service can be limited.

By backpackguru in Souvenirs
Caltagirone is a vibrant Baroque town in the middle of Sicily. It is also a great place to buy ceramics. The ancient tradition in ceramics here can be dated back a thousand years. There are a bunch of shops along La Scala as well as the Museum of Contemporary Ceramic Art. It's great to visit the museum because it helps you understand the deep routed tradition and history of ceramics in this area. Most of the work is done in a sage green or yellow color, both of which are the traditional colors of Sicily.