How much does it cost to travel to Ventimiglia?

How much money will you need for your trip to Ventimiglia? You should plan to spend around €97 ($115) per day on your vacation in Ventimiglia, which is the average daily price based on the expenses of other visitors. Past travelers have spent, on average, €30 ($36) on meals for one day and €39 ($47) on local transportation. Also, the average hotel price in Ventimiglia for a couple is €82 ($98). So, a trip to Ventimiglia for two people for one week costs on average €1,353 ($1,604). All of these average travel prices have been collected from other travelers to help you plan your own travel budget.

A vacation to Ventimiglia for one week usually costs around €676 for one person. So, a trip to Ventimiglia for two people costs around €1,353 for one week. A trip for two weeks for two people costs €2,706 in Ventimiglia. If you're traveling as a family of three or four people, the price person often goes down because kid's tickets are cheaper and hotel rooms can be shared. If you travel slower over a longer period of time then your daily budget will also go down. Two people traveling together for one month in Ventimiglia can often have a lower daily budget per person than one person traveling alone for one week.

How much does a trip to Ventimiglia cost? Is Ventimiglia expensive? The average Ventimiglia trip cost is broken down by category here. All of these Ventimiglia prices are calculated from the budgets of real travelers.

Find a hostel, guesthouse, or B&B in Ventimiglia

How much does it cost to go to Ventimiglia? Naturally, it depends on the dates. We recommend SkyScanner or Kayak because they can find the best deals across all airlines.

Ventimiglia On a Budget

Ventimiglia, Italy
Located just 7 km (4 miles) from the French-Italian border, Ventimiglia is a coastal city in northern Italy with an ancient past. The city has historic landmarks from Roman ruins to Romanesque churches still standing today, as well as stunning botanical gardens, and a contemporary scene of cafes, bars, and beachside fun.

Starting with the city's oldest remains, Ventimiglia is home to the ruins of a Roman theatre dating from the first half of the 2nd century. The remains of other buildings have also been discovered with traces of ancient city walls, mosaics, and a number of tombs. The ruins of ancient Albintimilium (the name for the preexisting Roman city) lie about a mile east of Ventimiglia's modern town in the plain of the Nervia River.

If Roman history is not ancient enough, you can also delve a little further with palaeolithic remains of some of the earliest modern humans at the Balzi Rossi caves. Located right near the French-Italian border, there is also a museum dedicated to the findings here. Also closer to the border is the Giardini Botanici Hanbury (or Hanbury Botanical Gardens), which surround the villa of Sir Thomas Hanbury. Here you can get lost in many varieties of tropical and sub-tropical species that thrive in the region's climate. It is known as one of the largest gardens in Italy and one of the finest in Europe.

Honing in a little closer on Ventimiglia's core, the city's old medieval center is significant historically and architecturally, and overlooks the new center from its perch on a hill. A tour through old town will bring you past a slew of beautiful churches like Church of San Michele Arcangelo from the 10th century and a number of other Romanesque cathedrals. If you prefer to see written history, walk the winding streets to the municipal library, which has the second largest collection of 17th-century manuscripts and books in Italy.

Ventimiglia is located in the Gulf of Genoa, with a small harbor at the mouth of the Roya River. The river divides the town into two parts, with the old town situated west of the river and the new town center located to the east. The old town is Ventimiglia's historic center, featuring a number of old churches and medieval landmarks amongst winding streets. The contemporary side of town caters more to the attractions of today. Some of its most famous features are its indoor and outdoor markets. The Ventimiglia Indoor Market on Via della Repubblica is open weekdays 7am-2pm, and all day on most weekends. The fresh produce, seasonal goods, cheeses, Italian specialties, plants, and more draw people across the French-Italian border every week to snatch up a deal. The outdoor market every Friday is also popular with about 500 stalls selling everything from food to clothing and housewares. This side of town also has more opportunities for shopping and dining as well as the public gardens.

The sights in and around Ventimiglia are sure to occupy a few days. Visitors often tour the ancient sights and landmarks of the city, indulge in the bustling markets for which Ventimiglia is famous, explore winding streets, get lost in the gardens, and of course hit the beach. Most of the beach is free to the public with designated areas for pets to enjoy as well. Manmade reefs just offshore have protected Ventimiglia's beaches from erosion, created a series of unique scalloped bays. There are also natural areas and reserves along the coast where birds like ducks and swans make their home.

The cuisine of northern Italy is a spread of your typical traditional Italian fare. Olive oil is used in almost everything, and the favorite sauce of the region is pesto made with basil, pine nuts, garlic, olive oil, and Parmesan cheese. There are many different kinds of homemade pastas like trofie and tagliatelle, as well as a selection of meat dishes like veal roulades, lamb stew, and stuffed pancetta all seasoned with aromatic herbs and spices of the region. Ventimiglia's location by the sea also makes the selection of fish and seafood always fresh and abundant. Other small bites include a variety of vegetable pies and focaccia made with anything from olive oil and rosemary to sundried tomatoes and oregano. For dessert, be sure to try the Italian ice cream, gelato. Most dining options are situated on the side of town east of the Roya River and along the waterfront.

To reach Ventimiglia, the best route would be to fly into the airport in Nice, France. From Nice, it is easy to take a train (via SNCF French rail company) that passes through Monaco and on to Ventimiglia. The distance from Nice to Ventimiglia is about 40 kilometers.

Once arrived in Ventimiglia, the train station is within walking distance to both the new town center and the original historic center.

Ventimiglia is also connected to Genoa by rail (130 kilometers/81 miles), if you prefer to fly into Genoa Cristoforo Colombo Airport. 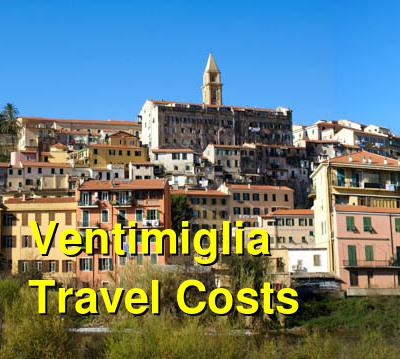