How much does it cost to travel to Dewa Sanzan?

How much money will you need for your trip to Dewa Sanzan? You should plan to spend around ¥8,000 ($55) per day on your vacation in Dewa Sanzan, which is the average daily price based on the expenses of other visitors. Past travelers have spent, on average, ¥2,929 ($20) on meals for one day and ¥2,743 ($19) on local transportation. Also, the average hotel price in Dewa Sanzan for a couple is ¥6,834 ($47). So, a trip to Dewa Sanzan for two people for one week costs on average ¥112,003 ($764). All of these average travel prices have been collected from other travelers to help you plan your own travel budget.

A vacation to Dewa Sanzan for one week usually costs around ¥56,001 for one person. So, a trip to Dewa Sanzan for two people costs around ¥112,003 for one week. A trip for two weeks for two people costs ¥224,006 in Dewa Sanzan. If you're traveling as a family of three or four people, the price person often goes down because kid's tickets are cheaper and hotel rooms can be shared. If you travel slower over a longer period of time then your daily budget will also go down. Two people traveling together for one month in Dewa Sanzan can often have a lower daily budget per person than one person traveling alone for one week.

How much does a trip to Dewa Sanzan cost? Is Dewa Sanzan expensive? The average Dewa Sanzan trip cost is broken down by category here. All of these Dewa Sanzan prices are calculated from the budgets of real travelers.

Looking for a hotel in Dewa Sanzan? Prices vary by location, date, season, and the level of luxury. See below for options.

How much does it cost to go to Dewa Sanzan? Naturally, it depends on the dates. We recommend Kayak because they can find the best deals across all airlines.

The price of renting a car in Dewa Sanzan will depends on dates, the type of car, the location, and your age. We recommend Kayak because they can find the best deals across all car rental companies.

Dewa Sanzan On a Budget 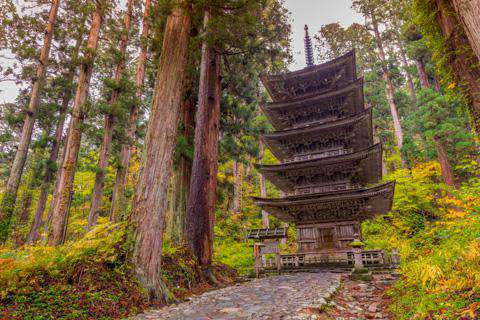 Dewa Sanzan, Japan
Dewa Sanzan, Japan is a picturesque city in the Tohoku region which consists solely of the three sacred mountains: Mount Haguro, Mount Gassan, and Mount Yudono. The mountains are considered holy to the Japanese Shinto religion and are a popular pilgrimage site, especially since many ascetic pilgrims live in the mountains and are occasionally spotted throughout the various hiking trails.

The climate in Dewa Sanzan is extremely important to consider when planning a trip here as weather greatly affects the accessibility of the mountains. Due to snowy winters and rainy springs and early summers, the best time to visit tends to be between July and mid-October.

Dewa Sanzan's three mountains are covered in beautiful pagodas, temples, and picturesque hiking trails. At the beginning of the Mt. Haguro trail, just through the forest, is the Goju-no-to five-story pagoda. Goju-no-to was built about 600 years ago and is actually registered as a National Treasure. On the mountain, about halfway up, you'll find the area where Japanese poet Basho wrote one of his famous poems. The peak of Mt. Haguro is quite flat, though it does provide stunning scenery and is also the spot of the Sanzan Gosaiden shrine which is dedicated to the spirtis of all three mountains.

Mt. Gassan and Mt. Yudono are actually connected at a certain point and therefore are often hiked at the same time. On Mt. Gassan, you'll find the Gassan Shrine located at the peak of the mountain. After walking the trail across to Mt. Yudono, you'll find the illustrious Mt. Yudono Shrine which actually bans any photographs and bans visitors from telling outsiders what you witness in the shrine!

The city of Dewa Sanzan is made up entirely of the three holy mountains, meaning there is no city center like that of other Japanese cities. You'll find many of the shops and restaurants are located near transport. There is a small shopping center by the Mt. Yudono bus stop which has a few restaurants and shops, it is especially popular for its souvenir shops.

Just outside of Dewa Sanzan is Oami, a small district of the neighboring city Yamagata, which has two popular temples, the Dainichibo and the Churenji. The city of Yamagata is more populated and has a few more options for food and accommodation.

Hiking is the main activity and really the only way to truly explore all of the culture and temples in the area. If you're not a huge fan of hiking, stick to Mt. Haguro as the hike consists primarily of the 2446 stone steps. There is a teahouse located halfway up the steps, making for a good resting place. For more avid hikers, check out Mt. Gassan and Mt. Yudono for a full-day hike through both mountains. Take caution of the weather and navigation when hiking these mountains; a simple map from the tourist office should suffice for navigation while additional gear may be needed depending on the weather. The mountains tend to see large wind gusts, cooler temperatures towards the top, and have slippery rocks when it rains, meaning proper hiking gear that is built for these conditions is a necessity.

Many of the food options in the Dewa Sanzan area are either chain restaurants or traditional Japanese restaurants often serving udon and soba. These small restaurants are scattered throughout the area, a few can be found at the 8th and 9th stations, the top of Mt. Gassan, and in the parking lot of Mt. Haguro. For the most options, head to the shopping center by the Mt. Yudono bus stop. Keep in mind that there is limited water supply on Mt. Gassan and Mt. Yudono, so be sure to have plenty of water with you before starting your hike.

The main station connecting you to the mountains is Tsuruoka Station located in the city of Yamagata. From Tsuruoka, you can take buses to the foot of Mt. Haguro and Mt. Gassan. There are only occasional buses connecting to Mt. Yudono since most people just hike from Gassan to Yudono then back to catch the bus.

There is a shuttle bus that can take you to the top of Mt. Haguro and take you from the base of Haguro to the base of Gassan. Mt. Haguro is a fair distance from the other two mountains so the shuttle bus is highly suggested seeing as you'll be doing quite a bit of walking all day already!