How much does it cost to travel to Oahu?

How much money will you need for your trip to Oahu? You should plan to spend around $266 per day on your vacation in Oahu, which is the average daily price based on the expenses of other visitors. Past travelers have spent, on average, $42 on meals for one day and $17 on local transportation. Also, the average hotel price in Oahu for a couple is $379. So, a trip to Oahu for two people for one week costs on average $3,729. All of these average travel prices have been collected from other travelers to help you plan your own travel budget.

A vacation to Oahu for one week usually costs around $1,864 for one person. So, a trip to Oahu for two people costs around $3,729 for one week. A trip for two weeks for two people costs $7,457 in Oahu. If you're traveling as a family of three or four people, the price person often goes down because kid's tickets are cheaper and hotel rooms can be shared. If you travel slower over a longer period of time then your daily budget will also go down. Two people traveling together for one month in Oahu can often have a lower daily budget per person than one person traveling alone for one week.


How expensive is Oahu? How much money do I need for Oahu?

How much does a trip to Oahu cost? Is Oahu expensive? The average Oahu trip cost is broken down by category here. All of these Oahu prices are calculated from the budgets of real travelers.

Looking for a hotel in Oahu? Prices vary by location, date, season, and the level of luxury. See below for options.

How much does it cost to go to Oahu? Naturally, it depends on the dates. We recommend Kayak because they can find the best deals across all airlines.

The price of renting a car in Oahu will depends on dates, the type of car, the location, and your age. We recommend Kayak because they can find the best deals across all car rental companies.

Tips and Handouts Budget in Oahu

Oahu On a Budget 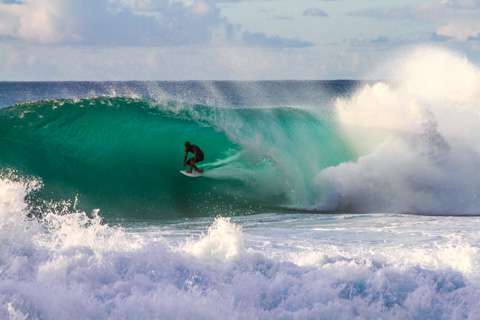 Oahu, Hawaii
Hawaii is the epitome of paradise, and at the heart of paradise is the island of O'ahu (or Oahu). While it's only the third largest of the Hawaiian islands, O'ahu, or "the gathering place," is the most populous in the state with approximately 976,000 people calling O'ahu home, many of which live in the capital city of Honolulu.

One of the many nicknames for Hawaii is "the rainbow state." So you're almost sure to see some plastered across the sky during your stay in O'ahu. On average the temperature on the island stays fairly warm with highs around 70 to 85 most of the year.

With the capital city of Honolulu and 85% of the state's population, O'ahu can claim the only metropolitan area in the state - but that doesn't mean there aren't calming spots for those who want to leave everything behind - you just have to know where to look.

While Hawaii is filled with lush rainforests and amazing volcanoes, everyone longs to visit the white, sandy beaches you see on postcards. For a little swimming and a little surfing, check out Kailua Beach. The fine sand is perfect for strolling or just lounging around. Perhaps one of the most famous beaches, however, is Waikiki Beach. Lined with resorts and tourists, Waikiki Beach, or "sprouting water," is the beach everyone sees on TV. Here you can ride those famous catamarans and the calm waters are perfect for easy wading and body surfing. These beaches are just a few of Oahu's best Instagram spots, as beautiful views are around every corner.

On the eastern side of the island is Lanikai beach. It's relatively small and secluded due to being surrounded by a residential community. However, it's one of the best beaches in the U.S.A. and worth a visit if you can find parking nearby. The snorkeling here is pretty good, too.

If you're here in the wintertime, check out the North Shore to witness the monstrous waves tackled by world champion surfers. It's a sight to behold that will make you see the real power of Mother Nature.

If you've had your fill of beaches, travel to Central O'ahu and tour the pineapple fields to see where these classic Hawaiian treats come from.

The southern region is known as Honolulu. It is where the capital city, beach hotspots, Pearl Harbor, shopping, nightlife and majority of the hotels and resorts are located. Most tourists don't venture outside of the Honolulu region. Central O'ahu is mostly suburbs with miles and miles of pineapple fields, while the eastern Windward Coast is full of sleepy towns and a Marine Corps base. The North Shore is where the iconic Hawaiian surfers find massive waves, and the Leeward Coast is the drier, less visited are of the island.

If you've grown restless lying in the sun, there are plenty of activities to find around the island. The most popular paid attraction in Hawaii is the Polynesian Cultural Center. Head over there to learn about Hawaiian culture and seven other Polynesian island groups. Brush up on the history and heritage while you walk along recreated traditional villages.

While you're in the mood for a little history, make your way to the USS Arizona Memorial. You can pay your respects and learn a little more about the fallen soldiers of Pearl Harbor.

If you're ready to get off the lounge chair, but not ready to say goodbye to the water, consider a kayak tour of Kailua Bay. A guided or self-guided tour will lead you to breathtaking bird sanctuaries and just hop out for a quick snorkel with sea turtles. Or simply put the paddle down and take in the view around you. It's also possible to meet more sea creatures up close in various places around the island. Check out this article for an in-depth guide to where to swim with dolphins in Oahu.

Then, of course, who hasn't dreamed of riding horseback along a Hawaiian beach? You can don your fanciest white linens and make that dream a reality on the North Shore.

Hiking in Oahu is also popular, as you can experience the tropical climate and environment while viewing waterfalls, gorgeous green cliffs, and amazing views overlooking Honolulu. Plenty of trails are found on the island, and many of them are not too difficult.

For even more ideas of things to do, check out this great 4-day Oahu itinerary.

Sit back and enjoy the medley of traditions fused together in the pacific dishes of O'ahu. Seek out the tropical fruits (pineapple, mango, bananas, guava, papaya) and fresh fish of the region. There is no limit to the variety you can find in O'ahu.

The best setting for anyone to experience the Hawaiian cuisine is the traditional luau. While it's a bit expensive, the experience is worth it. If price is a problem, though, consider eyeing the roads for food trucks handing out traditional plate lunches. In the North Shore, shrimp trucks can be under $10.

While the easiest way to get around the city would be taxis and car rentals, it's not always the most cost effective. The Oahu bus system, known as TheBus, runs between towns and stops at most tourist destination spots. The fare is cheap and they offer day pass options.