How much does it cost to travel to Denver?

How much money will you need for your trip to Denver? You should plan to spend around $168 per day on your vacation in Denver, which is the average daily price based on the expenses of other visitors. Past travelers have spent, on average, $34 on meals for one day and $81 on local transportation. Also, the average hotel price in Denver for a couple is $127. So, a trip to Denver for two people for one week costs on average $2,358. All of these average travel prices have been collected from other travelers to help you plan your own travel budget.

A vacation to Denver for one week usually costs around $1,179 for one person. So, a trip to Denver for two people costs around $2,358 for one week. A trip for two weeks for two people costs $4,715 in Denver. If you're traveling as a family of three or four people, the price person often goes down because kid's tickets are cheaper and hotel rooms can be shared. If you travel slower over a longer period of time then your daily budget will also go down. Two people traveling together for one month in Denver can often have a lower daily budget per person than one person traveling alone for one week.


How expensive is Denver? How much money do I need for Denver?

How much does a trip to Denver cost? Is Denver expensive? The average Denver trip cost is broken down by category here. All of these Denver prices are calculated from the budgets of real travelers.

How much do vacation rentals cost in Denver? Prices vary by location, date, size of the place, and the level of luxury. See below for options.

What did other people spend on Food in Denver?

Typical prices for Food in Denver are listed below. These actual costs are from real travelers and can give you an idea of the prices in Denver, but your costs will vary based on your travel style.

How much does it cost to go to Denver? Naturally, it depends on the dates. We recommend SkyScanner because they can find the best deals across all airlines.

The price of renting a car in Denver will depends on dates, the type of car, the location, and your age. We recommend SkyScanner because they can find the best deals across all car rental companies.

Tips and Handouts Budget in Denver

Denver On a Budget

Denver, Colorado
The capital of Colorado, Denver is commonly referred to as "The Mile-High City" because it is at an elevation of 5,280 feet (1,600 meters) above sea level. It also sits where the Great Plains meet the Rocky Mountains, giving a beautiful backdrop for this metropolitan city. The city is the largest in the Rocky Mountains with a population of more than 600,000 and nearly 3 million in the metropolitan area. Denver is a cosmopolitan city with cowboy roots. It's cultural scene is thriving, and the outdoor recreation in the area is superb. Denver is a rapidly growing city but with change comes challenges. Urban sprawl is a problem and the city's infrastructure has reached its limits. Still, efforts are in place to maintain the character and personality that Denver is known for.

The city's climate is temperate and sunny days are common. There are four distinct seasons. During the winter months snowstorms are common but temperatures are usually warmer than the New England region of the United States. Spring is pleasant, although snow can occur well into April. Summer begins in June and temperatures rise quickly. Highs during the summer months can reach the high 80's or mid 90's. Fall begins in early September and temperatures drop rapidly.

Denver is really a collection of nice neighborhoods, many of which are fun to explore on their own. The city has many parks and green space, and being outside is an essential part of a trip to Denver. Popular museums in the city include the Byers-Evans House Museum, the Denver Art Museum, the Denver Museum of Nature & Science, the Black American West Museum, the Chamberlin Observatory, and Molly Brown House Museum. Popular parks around town include City Park, the Denver Zoo, the Denver Botanic Gardens, Washington Park, Cheesman Park, and Confluence Park. A visit to the Denver State Capitol is also enjoyable. Make sure you take in most or all of these sites if you have 3 days in Denver.

If you're hoping to do some shopping there are several areas you can check out including the 16th Street Mall, the Cherry Creek Shopping District, the Lower Downtown area, Larimer Square, and Colfax Avenue.

Denver really is a city for outdoor enthusiasts. There are plenty of parks, hiking trails, and outdoor areas in town and just outside of the city that are worth exploring. There are also a handful of amusement parks and sporting events that you can attend.

There are festivals in town almost year around so check out a schedule before you visit to see what's going on. While festivals are most common during the summer months, events occur in the winter months as well that are well worth a trip.

If you're looking for cultural activities, or if the weather isn't great, then there are some shows or concerts you can enjoy. Check out the Colorado Ballet, the Colorado Symphony, the Denver Center for the Performing Arts and Opera Colorado.

Restaurants are abundant and food is generally quite good in Denver. There are a variety of local specialties with Green Chili being a favorite. It's a brown, thick sauce that is made with pork and Pueblo green chilies. It can be served with almost anything including chorizo, eggs, or tamales. Other local dishes often include ingredients such as angus beef, buffalo, cutthroat trout and Rocky Mountain oysters. Some restaurants may even have rattlesnake on the menu.

Mexican restaurants are ubiquitous around town and usually one of the more affordable options. You can really find cuisine from all over the world with Thai, Vietnamese, Japanese, and Chinese all available.

You'll likely want access to a car when you're visiting Denver. Much of the appeal of this city comes from getting out and exploring the nearby natural settings, most of which are not accessible by public transportation.

There is a public transportation system in town which includes buses and a light rail, both of which are reliable but are feeling the strain of the city's growing population. The light rail system connects the downtown area to the south central and southeast suburbs. Buses make up the most significant part of public transit in the city. Even so, it is inefficient to rely solely on public transit during your time in Denver.

Another option is the explore the city with a bike. There's an elaborate network of bike trails which allow you to have a unique perspective on this bustling city. There is a strong cycling culture in the city and there are many bike lanes around town. The main trails run along Cherry Creek and the Platte. 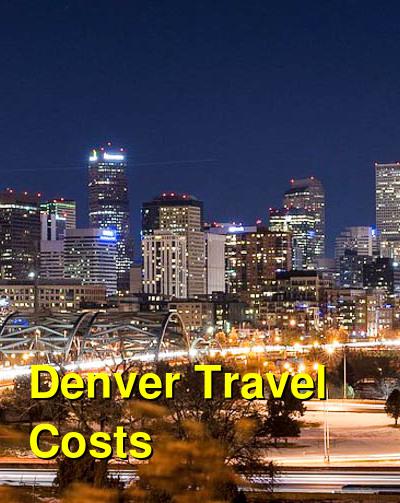