How much does it cost to travel to Seattle?

How much money will you need for your trip to Seattle? You should plan to spend around $156 per day on your vacation in Seattle, which is the average daily price based on the expenses of other visitors. Past travelers have spent, on average, $38 on meals for one day and $18 on local transportation. Also, the average hotel price in Seattle for a couple is $189. So, a trip to Seattle for two people for one week costs on average $2,183. All of these average travel prices have been collected from other travelers to help you plan your own travel budget.

A vacation to Seattle for one week usually costs around $1,092 for one person. So, a trip to Seattle for two people costs around $2,183 for one week. A trip for two weeks for two people costs $4,366 in Seattle. If you're traveling as a family of three or four people, the price person often goes down because kid's tickets are cheaper and hotel rooms can be shared. If you travel slower over a longer period of time then your daily budget will also go down. Two people traveling together for one month in Seattle can often have a lower daily budget per person than one person traveling alone for one week.


How expensive is Seattle? How much money do I need for Seattle?

How much does a trip to Seattle cost? Is Seattle expensive? The average Seattle trip cost is broken down by category here. All of these Seattle prices are calculated from the budgets of real travelers.

How much do vacation rentals cost in Seattle? Prices vary by location, date, size of the place, and the level of luxury. See below for options.

What did other people spend on Food in Seattle?

Typical prices for Food in Seattle are listed below. These actual costs are from real travelers and can give you an idea of the prices in Seattle, but your costs will vary based on your travel style.

How much does it cost to go to Seattle? Naturally, it depends on the dates. We recommend SkyScanner because they can find the best deals across all airlines.

The price of renting a car in Seattle will depends on dates, the type of car, the location, and your age. We recommend SkyScanner because they can find the best deals across all car rental companies.

What did other people spend on Transportation in Seattle?

Typical prices for Transportation in Seattle are listed below. These actual costs are from real travelers and can give you an idea of the prices in Seattle, but your costs will vary based on your travel style.

Tips and Handouts Budget in Seattle

What did other people spend on Tips and Handouts in Seattle?

Typical prices for Tips and Handouts in Seattle are listed below. These actual costs are from real travelers and can give you an idea of the prices in Seattle, but your costs will vary based on your travel style.

Seattle On a Budget

Seattle, Washington
Situated on the Puget Sound in the state of Washington, Seattle is the largest city in the United States Pacific Northwest. It's a beautiful city surrounded by the water and mountains and filled with evergreen trees. It's also the home of some famous American institutions including Starbucks Coffee, Amazon, and Microsoft. The population of almost 700,000 continues to grow. As of 2014, the city was considered the fastest growing major city in the United States. The entire metropolitan area has about 3.6 million residents, making it the 15th largest metro area in the US. The natural beauty, growing economy, and educational base give Seattle a youthful vibe that keep the city young and energetic.

Well known for its frequent rainy days, you'll find the city flocks to the outdoors on the occasional days when the sun decides to make an appearance. The climate is considered oceanic or temperate marine. Temperatures are cool and damp in the winter and warmer and dryer during the summer.

Although exploring Seattle is really about exploring the neighborhoods, there are still some excellents sights and attractions throughout the city. Perhaps the most famous Seattle landmark is the famous Space Needle. You can visit the top for a good view of the city and the surrounding areas. Another must see is Pikes Place Market as well as Hiram M. Chittenden Locks. You should also head over to Chinatown where there are some good markets and restaurants. If you're in the area on a weekend definitely find a good restaurant that serves up dim sum.

There are some great museums in the city as well. The Seattle Art Museum is excellent. Also worth visiting are the Seattle Asian Art Museum, the Wing Luke Museum of the Asian Pacific American Experience and the Frye Art Museum.

Seattle is known as a city of neighborhoods, and part of the city's charm comes from exploring it's many districts, each of which has its own personality and character. The downtown area has one of the most interesting areas, Pikes Place Market, where you can pick up anything from freshly caught seafood to homemade donuts. Pioneer Square and the International District make up the city's oldest areas and have some excellent and diverse restaurants. Capital Hill has a great nightlife and Ballard is where you should go if you want to see the canal locks.

There is no shortage of events in Seattle. Notable events include Seafair in July and August, Bumbershoot, the Northwest Folklife Festival, Bite of Seattle, Hempfest, Capitol HIll Block Party and Fremont Fair.

A number of day trips outside of Seattle are also possible. Take the ferry across the sound to Bainbridge Island (or the other areas). Visit one of the many nearby National Parks such as Mt. Ranier and go for a hike. Head up to the small towns and beautiful lakes around Mt. Baker to the northeast. Or, take the drive out to visit Mel's Hole in Ellensburg on I-90.

Here are more ideas for day trips from Seattle.

Fresh seafood is the specialty in Seattle. It's available in restaurants and markets throughout the city. If you're hoping to have a picnic, then head to Pike Place Market. There you can pick up some bread, cheese, sausage or smoked fish and dine on the grass at the north end of the Market. Make sure you try the fresh donuts that are for sale in the market.

Asian food is also plentiful throughout the city. Dim sum is a popular option and a great way to try a sampling of items. There's a high concentration of Asian restaurants in the Chinatown area. Each has its own flavor and prices are quite reasonable.

You can walk around most neighborhoods of interest in Seattle and there's a light rail system that connects a few of the neighborhoods. Buses in the city do connect many areas. Some buses only run during rush hour so make sure you understand the schedule. The light rail system connects Westlake Center downtown and the Sea-Tac Airport, passing through South Seattle and Tukwila. There is also a commuter rail service and the South Lake Union Streetcar that runs between Downtown and South Lake Union. A passenger ferry connects the Downtown and West Seattle. It can be caught at Pier 55.

Exploring the whole area is a lot easier if you have access to a car, or, if you're motivated, biking in Seattle can be a fun and efficient way to explore the city. The weather can change at a moments so do be prepared for rain. 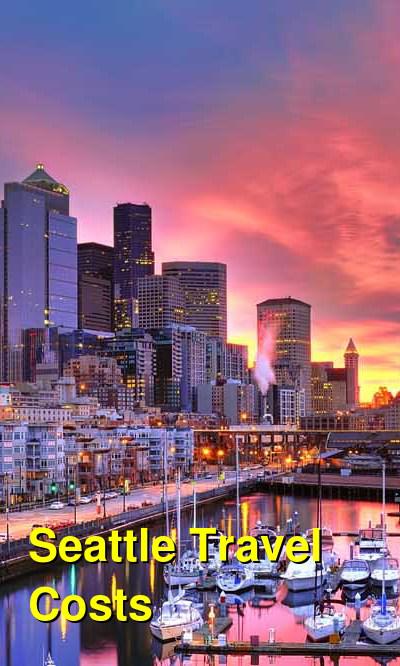 By backpackguru in Food
Check out the restaurants in Seattle's International District. They're authentic, they're delicious, and they're cheap. Enjoy some Chinese Dim Sum, Vietnamese Pho, or Japanese sushi. The neighborhood doesn't exactly have the same feel as some more well known Chinatowns, but the restaurants easily compare.

By Bryan in Entertainment
Take one of the many public ferries across the sound for a great view of the city and to experience a more laid-back lifestyle on the other side of the way. On a clear day they say you can see Mount Rainier, but the weather tends to be cloudy most of the time. One of the best places to go is to Bainbridge island to the town of Winslow. It's a small alpine town on the water with pleasant restaurants and nice walking trails along the small harbor. The ferry ride costs about $8 per person for a round trip and leaves from the waterfront in downtown Seattle. You can also take a water taxi to West Seattle or other nearby places.