How much does it cost to travel to Portland?

How much money will you need for your trip to Portland? You should plan to spend around $136 per day on your vacation in Portland, which is the average daily price based on the expenses of other visitors. Past travelers have spent, on average, $34 on meals for one day and $20 on local transportation. Also, the average hotel price in Portland for a couple is $152. So, a trip to Portland for two people for one week costs on average $1,897. All of these average travel prices have been collected from other travelers to help you plan your own travel budget.

A vacation to Portland for one week usually costs around $949 for one person. So, a trip to Portland for two people costs around $1,897 for one week. A trip for two weeks for two people costs $3,794 in Portland. If you're traveling as a family of three or four people, the price person often goes down because kid's tickets are cheaper and hotel rooms can be shared. If you travel slower over a longer period of time then your daily budget will also go down. Two people traveling together for one month in Portland can often have a lower daily budget per person than one person traveling alone for one week.


How expensive is Portland? How much money do I need for Portland?

How much does a trip to Portland cost? Is Portland expensive? The average Portland trip cost is broken down by category here. All of these Portland prices are calculated from the budgets of real travelers.

How much do vacation rentals cost in Portland? Prices vary by location, date, size of the place, and the level of luxury. See below for options.

How much does it cost to go to Portland? Naturally, it depends on the dates. We recommend Kayak because they can find the best deals across all airlines.

The price of renting a car in Portland will depends on dates, the type of car, the location, and your age. We recommend Kayak because they can find the best deals across all car rental companies.

What did other people spend on Food in Portland?

Typical prices for Food in Portland are listed below. These actual costs are from real travelers and can give you an idea of the prices in Portland, but your costs will vary based on your travel style.

Tips and Handouts Budget in Portland

Portland On a Budget 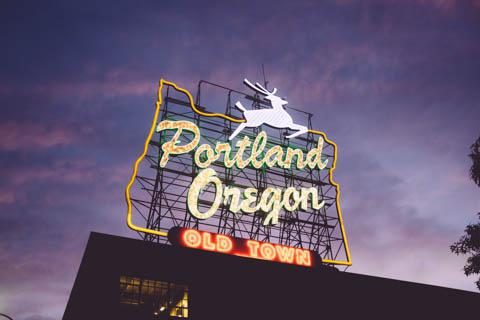 Portland, Oregon
Referred to as "The City of Roses", Portland is the largest city in Oregon. It sits on the banks of the Columbia River and offers breathtaking views of Mount Hood when the weather allows. Portland is famous for its alternative vibe, live music scene, and popular microbreweries. It's also a mecca for environmentally conscious urban planning. The downtown area is quite compact and walkable. While the city itself may be smaller than you expect, it is still the largest metropolitan area between San Francisco and Seattle.

For many people, Portland's atmosphere is a part of the appeal. The city has a youthful vibe with a lot of outdoor oriented activity. The population is known to be very eco-friendly and the city's atmosphere is actually quite relaxed. There are many independently owned shops that sell interesting and unique merchandise. You'll find plenty of used bookshops, coffee shops, and microbreweries, as well as a high concentration of restaurants for a city of its size.

Portland has a similar climate to the rest of the Pacific Northwest. Rain is common during the fall, winter and spring seasons. It is not uncommon for there to be a constant drizzle or mist that keeps you damp, but downpours are less likely. Winters rarely see snow but can be very rainy. By late June, the clouds begin to part and the temperatures get much warmer. The summer months are very pleasant and offer a great time to visit the city.

There are plenty of places to explore and wander in Portland, as well as some great sights and landmarks. Most of these you can visit during a weekend in Portland as the city is fairly compact and easy to navigate. The Museum of Contemporary Craft is a great place to visit as is the Oregon Museum of Science and Industry. The Portland Aerial Tram will give you some good views of the downtown area and, if the weather is good, the surrounding mountains. Portland Underground is a series of tunnels that can be explored by tour and Pittock Mansion is a beautiful Victorian mansion. There are some great gardens around Portland as well so make sure you take the time to swing by Crystal Springs Rhododendron Garden, the Grotto Gardens, or Forest Park.

Portland has many unique and beautiful neighborhoods. In the southwest area you'll find the city's downtown which is very compact and pedestrian friendly. It's a great area to walk around and has many attractions to draw visitors. Pioneer Courthouse Square is a brick plaza that is the cultural center for the city. The Yamhill National Historic District is a compact, six block area that has 19th century architecture and some interesting places to visit. The Old Town District was the city's original commercial core that runs along the Willamette River. Portland Heights is located in the hills south of Burnside Street and west of SW Vista. This is one of the oldest and wealthiest neighborhoods in the city. South Waterfront is a newer neighborhood with high rise offices and condos

While you're in Portland, take advantage of the area's excellent music scene. There are a good number of venues that get some very popular shows, but it can be just as fun to visit the local bars and clubs and enjoying whatever local band is performing that night.

There are also any number of festivals and events that take place throughout the year. The Portland Rose Festival is in early June and is the city's largest event. It's a fun and beautiful time to visit the city.

Portland has no shortage of restaurants for all budgets. Burgers, cafes, Mexican, and Chinese restaurants are all great options for those on a budget. If you're looking for a nicer restaurant, there are plenty of seafood restaurants, wine bars, or grills that have great food in an excellent setting.

It is best to avoid driving in downtown Portland. It can be expensive and difficult to find parking and the streets are prone to closing at random times. It's also a very pedestrian friendly city so this is one of the most convenient and fun ways to explore. Portland is also a great city for bikers. Public transit is also a good option. There are buses, streetcars, and a light rail system that all travel through the area. The light rail has four lines that are color coded. The Blue Line runs from Hillsboro east through Beaverton and downtown to Gresham. The Red Line runs from the airport to the downtown area and west to Beaverton. The Yellow Line runs from the Expo Center south to downtown and the Portland State University. The Green Lines runs from Clackamas Town Center north and west to downtown and the University.