How much does it cost to travel to Rockhampton?

How much money will you need for your trip to Rockhampton? You should plan to spend around AU$209 ($148) per day on your vacation in Rockhampton, which is the average daily price based on the expenses of other visitors. Past travelers have spent, on average, AU$61 ($43) on meals for one day and AU$24 ($17) on local transportation. Also, the average hotel price in Rockhampton for a couple is AU$248 ($176). So, a trip to Rockhampton for two people for one week costs on average AU$2,930 ($2,071). All of these average travel prices have been collected from other travelers to help you plan your own travel budget.

A vacation to Rockhampton for one week usually costs around AU$1,465 for one person. So, a trip to Rockhampton for two people costs around AU$2,930 for one week. A trip for two weeks for two people costs AU$5,860 in Rockhampton. If you're traveling as a family of three or four people, the price person often goes down because kid's tickets are cheaper and hotel rooms can be shared. If you travel slower over a longer period of time then your daily budget will also go down. Two people traveling together for one month in Rockhampton can often have a lower daily budget per person than one person traveling alone for one week.

How much does a trip to Rockhampton cost? Is Rockhampton expensive? The average Rockhampton trip cost is broken down by category here. All of these Rockhampton prices are calculated from the budgets of real travelers.

How much do vacation rentals cost in Rockhampton? Prices vary by location, date, size of the place, and the level of luxury. See below for options.

How much does it cost to go to Rockhampton? Naturally, it depends on the dates. We recommend Kayak because they can find the best deals across all airlines.

The price of renting a car in Rockhampton will depends on dates, the type of car, the location, and your age. We recommend Kayak because they can find the best deals across all car rental companies.

Best Hostels Near Rockhampton Along the Capricorn CoastBrisbaneGold CoastCairnsTorquaySurfers Paradise

Rockhampton On a Budget 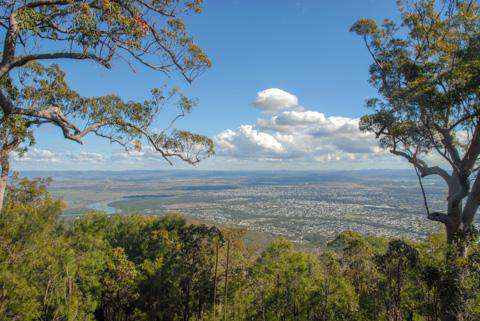 Rockhampton
Rockhampton is a city in Queensland, Australia with a population of around 75,000. It dates back to 1855 and historically the economy was driven by gold, mining, and agriculture. Today it feels more bustling than you would expect in an "outback town." There's traffic, suburban sprawl, and continuing growth and development. The city sits on the Fitzroy River about 45 kilometers from the river's mouth.

The city has more than 300 days of sunshine yearly and is a popular travel destination year around. There is no shortage of outdoor activities that you can enjoy and there are plenty of outdoor parks and recreation areas to visit. The climate is humid subtropical and the city sits on the Tropic of Capricorn within the southeast trade wind belt. Temperatures typically range from 22 to 32 degrees Celsius in the summer and 9 to 23 degrees Celsius in the winter season. Summer is the wet season and winter is the dry season.

There are plenty of sights around town, but some of the most popular include the Rockhampton Zoo, which is best visited at 3:00 during feeding time, the Botanic Gardens, just outside the zoo, the Rockhampton Heritage Village, with some fascinating historical buildings, Dreamtime Cultural Centre, which displays local, aboriginal artwork, and Mount Etna Caves National Park, which offers guided tours of the area's interesting caves. Another interesting place to visit is the Koorona Crocodile Farm, where you can view crocodiles and then enjoy a crocodile based dish in the cafe. Prices are extraordinarily high, with main dishes costing you more than $20. It is possible to arrange a tour of the facility, and this will likely give you the best deal.

Rockhampton can be divided into a north and a south side. There are three bridges that connect each side. One is for trains and the other two are for vehicles. To the north of the city is the Shoalwater Bay Military Training Area. There are ten shopping centers around town that include many major national and international retailers.

Mount Archer is a great place to visit. It has nice views of Rockhampton and can be reached by traveling towards Frenchville and turning right onto Pilbeam Drive.

The town is also famous for several good festivals. Both the Multicultural Festival and CQU Open Day have market stalls with international food, music, and cultural activities. The Village Festival is the largest music and arts celebration in the area and offers music, performing arts, visural arts, and street theater, among other things. The Big River Jazz Festival is a three day jazz festival in September. There is also the Pilbeam Theatre, that seats 1200 people. They host national and international music and comedy shows.

There are ten major shopping centers around town with many national and international retailers represented.

There are a handful of decent restaurants around town. Blue Truffles has great food at a decent price. For fresh seafood try Aficionado. Indian, Italian, Thai, and Vietnamese restaurants are also available.

There are also four nightclubs in town on William Street near Quay Street. Bars are spread throughout town as well. There's a particularly lively atmosphere at the Criterion Hotel on Quay Street.

The Rockhampton Airport is the easiest way to arrive in the city, with regular flights arriving from Brisbane and Sydney among other cities. Alternatively, you can drive into town on a quality road. Expect a seven or eight hour drive from Brisbane. You can also arrive by train from Brisbane, with six trains a week making the journey.

Once you're in Rockhampton, it is best to have access to a car to the explore the area. Roads outside of town are almost all paved and high quality. There are plenty of rental car companies in town and you will have your choice of vehicles. Taxis are also available around town as well as to and from the airport. The trip from the airport to the city center takes about 15 minutes. Cycling around town is possible as well. The area is relatively flat and traffic is typically not a problem. Drivers are less welcoming to cyclists as you venture into more rural areas. The city center is relatively walkable and many destinations can be reached on foot.

By Laurie in Entertainment
Just outside of Rockhampton is Koorona Crocodile Farm. It's a great place to learn about crocodiles, but the best deal is to take the tour. On the tour you can feed and see the cocodiles. You also have the option to hold a younger crocodile. It's $22 for adults, and $11 for children, so the price is not cheap.

There's also a restaurant where you can same some crocodile dishes. For around $20 a dish, it's also not a cheap option.