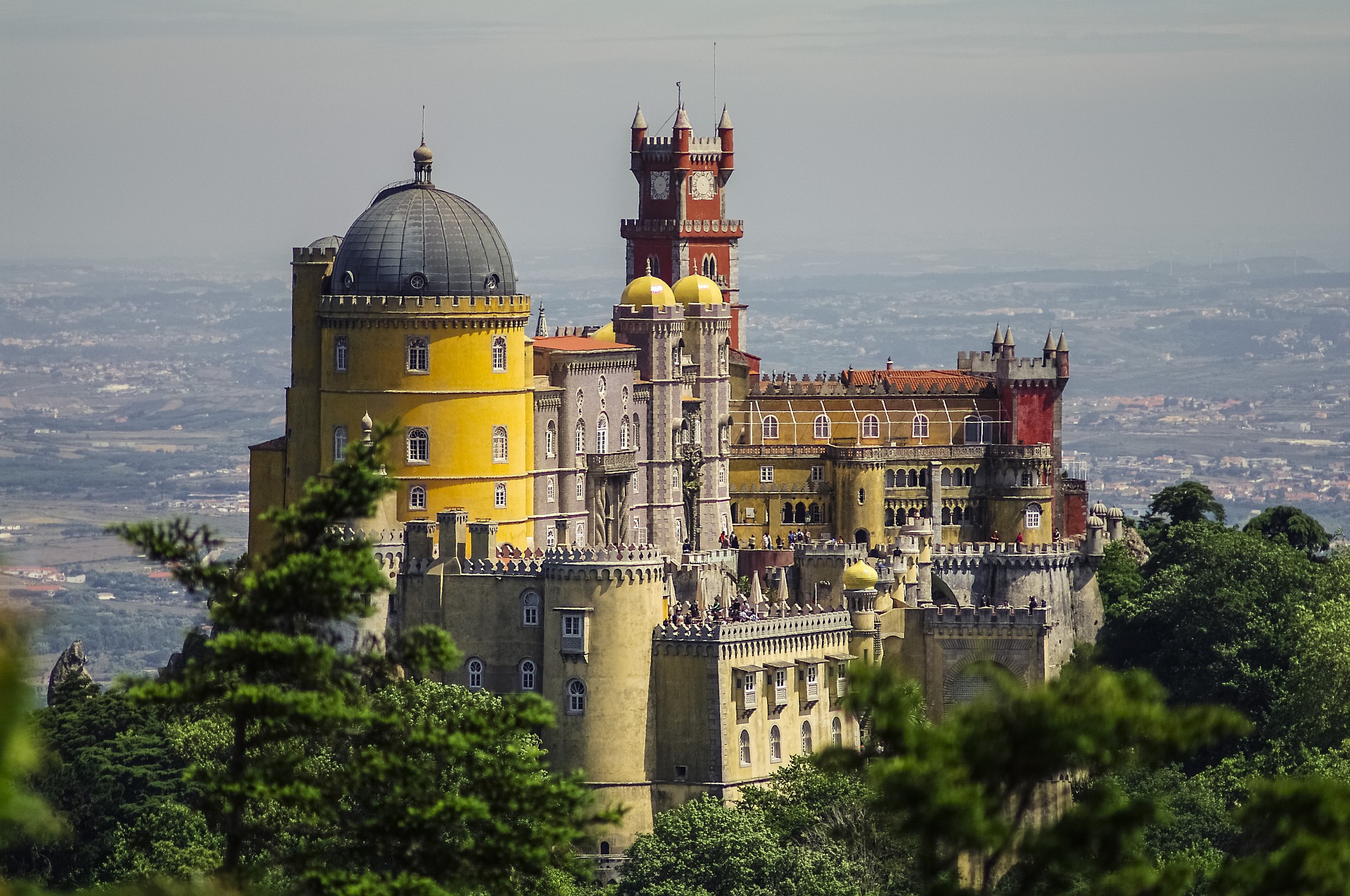 With 1,794 km (1,115 mi.) of stunning coastline, a rich history filled with wonders and mystery, and some of the best European cuisine, there’s no shortage of reasons to travel to Portugal for your next holiday. Thankfully, Portugal also sports temperate weather year-round, making it one of the top destinations in the world no matter what season you decide to visit.

Outside of Portugal’s enchanting natural beauty and delicious food, the country is also renowned for its gorgeous architecture and its warm and welcoming people. It shouldn’t be too surprising that all these factors help to draw millions of visitors to the small Western European nation annually.

While many of Portugal’s mesmerizing monuments are well-known around the globe, like the National Palace of Pena, it still hides some of the best-kept secrets for avid travelers looking to get off the beaten path or escape the crowd.

If you’re seeking to see scenic sights outside of the norm, this guide has you covered with the 5 best-hidden gems in Portugal. Prepare to be captivated by some of the most untouched travel destinations in Portugal. You’ll be amazed by what’s in store.

Magical Sintra with its fascinating royal past and numerous palaces and castle should undoubtedly form part of your Itinerary when visiting Lisbon. At under an hour by train when traveling to Sintra from Lisbon, visiting this charming town is a great day trip option from the Portuguese capital. It’s here that you will find the gorgeous Quinta da Regaleira estate.

Although this particular UNESCO World Heritage site has been gaining popularity in recent years, Quinta da Regaleira is nowhere as famous as the aforementioned National Palace of Pena.

This 20th-century palace should be, however, as its eccentric architecture is made from an intricate mixture of breathtaking Gothic, Roman, Renaissance, and Neomanuel elements. Its enigmatic grounds house not only the grand palace where you can visit the former owner’s bedrooms, library, dining room, study room, leisure room, but also lush gardens bursting with tucked-away treasures from grottoes to underground tunnels.

The 4-hectare sweep of land has actually exchanged owners a few times throughout its history, originally belonging to the Viscountess of Regaleira, descended from a family of wealthy Porto merchants. Possession of the land eventually swapped hands in 1892 when the Viscountess sold it to an influential Brazilian-Portuguese businessman, António Augusto Carvalho Monteiro, for 25,000 réis.

Also a Freemason, Monteiro wanted to erect a family home that reflected his political ideologies and social interests, leading to the commission for Quinta da Regaleira which began its construction in 1904. The palace, including its extensive estate, was designed by Italian architect Luigi Manini, who would also go on to design Monteiro’s crypt, and the project was completed by 1910.

Do yourself a favor and venture inside the palace first upon arrival and then the chapel. While the architecture of both buildings is a treat to behold from the inside-out, the estate’s biggest draw is its huge, maze-like gardens that feature so many fountains, caves, lakes, grottoes, and underground tunnels lit by Christmas lights. You could spend hours trying to navigate them all! Find the Initiation Well and get drawn down into its dark depths or visit the estate’s aquarium or greenhouse to get more in touch with nature.

Either way, you won’t be disappointed by what you find but keep an eye out for the several symbols dedicated to Masonry, alchemy, and the Knights Templar hidden all around the property. Monteiro would end up selling Quinta da Regaleira to Waldemar d’Orey in 1942 who then sold the lavish property to a Japanese corporation in 1987 before the Sintra Town Council procured it in 1997. Graciously, they opened Quinta da Regaleira to the public in 1998 and when you leave, you’ll be thanking your lucky stars that they did!

And if you’re looking for a place to stay in Sintra, check out the best hostels in Sintra here.

The origins of Bacalhôa Buddha Eden and why the site was constructed are just as touching as the place is beautiful. In 2001, the Taliban destroyed the Buddhas of Bamiyan in Afghanistan, 6th-century Buddhist monuments considered to be wonders of the Ancient World. As a sign of solidarity facing the loss of the historically-significant Middle Eastern statues, José Berardo, one of Portugal’s richest men, had the botanical garden created in reaction.

Erected on a 35-hectare patch of land, Bacalhôa Buddha Eden now stands as Europe’s largest oriental botanical garden, with over 6,000 tons of marble and granite used to build its vast grounds. Bacalhôa Buddha Eden boasts over 700 hand-painted terracotta soldiers, a lake that’s home to hundreds of koi fish as well as a central staircase that acts as the focal point of the garden.

Though many people have never heard of Bacalhôa Buddha Eden’s exquisite beauty, you can therefore rest assured that you’ll be able to fully enjoy its peace and tranquility away from the crowd. Let the garden’s traditional Asian architecture transport you away to the Far East as you marvel at the natural landscape and modern sculptures. You’ll be feeling Zen in no time.

Can you imagine yourself on a tropical island, floating in a crystal-clear pool of water carved by volcanic lava as the warm sea breeze blows across your skin? Then Madeira, one of Portugal’s islands off the coast of northwestern Africa, is just the destination for you!

There are very few places in Europe that offer travelers natural pools left by the movement of molten lava as it crashed into the sea when the island formed eons ago. Now the pools are repeatedly refilled with seawater from the Atlantic Ocean, providing a unique swimming experience that’s one for the memory book. Though Madeira might be a bit out of the way, the flights from Lisbon aren’t too pricey in advance and its remote location practically guarantees that you can have the place almost to yourself. And for accommodation, here are the best hostels in Madeira.

Porto Moniz lies to Madeira’s northwest and, besides the seawater pools, the 3,800 square meters (40,900 square feet) space also features changing rooms, lockers for storing possessions, lounger chairs, and on-site parking, plus a bar in summer. Head to Porto Moniz when the weather is warm to take a dive into the crystalline waters of its pristine pools and reemerge in the splendor of a paradise crafted by nature Herself. Could you really ask for anything better?

If you enjoy the sun, sand, and sea but think they can do with a little more grandeur, Capela do Senhor da Pedra Chapel could be the place you’ve been waiting for. This is a 17th-century oceanfront chapel that was constructed on Praia de Miramar Beach atop a huge rock that found its roots in Pagan mysticism before the country was converted to Christianity.

Located roughly 30-mins drive by car from Porto, this is one of those truly unique and top things to do when in Porto!

Roughly translated to “Chapel of the Lord of the Stone,” the small, hexagonal chapel was built in 1686 right on the coast and has a Baroque style altar made of gilded wood along with dozens of religious statues. Make sure to look out for the inscriptions etched into the blue tiles on either side of the entryway dedicated to God’s only begotten son and the other to the site’s Pagan past.

Aim to time for your visit for low-tide so that you can make the most of your visit to Capela do Senhor da Pedra Chapel. Better yet, why not attend the yearly pilgrimage that takes place on the beaches of Senhor da Pedra from Holy Trinity Sunday until the next Tuesday? There’s no more picturesque place to find both surf and style so come worship at the altar by the sea or catch an unforgettable sunset.

See Also  The 10 Best Beaches in the Algarve

This area is not far from Porto, so here’s a list of the best hostels in Porto if you need a place to stay.

Here’s hoping that you don’t suffer from claustrophobia, as Algar de Benagil is one of the most beautiful caves in the world. It’s located only 100-200 meters (328-656 feet) from Praia de Benagil (about midway between Portimao and Albufeira). The cave was created from erosion from the sea hitting its cliffs and now features a ceiling opening along with a small beach inside that can only be visited via water transportation.

Book a boat tour, rent a kayak, or swim there from the beach, but make sure the tide is on your side before you try to explore the enclosed space. Although it can be a bit challenging to get to, this last location is certainly worth the trip if you want to check out a wonder of nature. It’s only 60 meters (197 feet) from the coastline for strong swimmers so don’t miss out on what is sure to be an unbelievable discovery away from the crowd. Don’t forget your camera.

Regardless of what initially pulled you to Portugal, you can rest assured knowing that it holds magic and charm around nearly every corner from the frequented destinations to those kept under wraps.

From palaces with underground tunnels to seawater pools or caves carved by nature and time, Portugal’s beauty knows no bounds, even in its lesser-known locales. Travel to Portugal outside of the peak tourist season to ensure you can unearth its hidden gems in absolute peace and at your own pace. Now, how’s that for an escape?

Born and raised in South Africa, Marco Santos from Travel-Boo, currently resides in sunny Lisbon, Portugal. With an absolute love for Europe, he is on a mission to rediscover his own Portuguese heritage along the way. Marco has set out to blog and share his passion for travelling through and exploring both Portugal, Spain and throughout Europe, through his blog Travel-Boo.