Things to do in Dresden

The most significant and remarkable buildings of Dresden were erected in the 18th century during the reign of Saxon King Augustus. At that time the city was known under the name "Florence on the Elbe" and few cities in Europe could boast such a magical Old Town and stunning cityscape.

What to see in Dresden Altstadt

It's very convenient to divide your exploration of Dresden into two parts - the city itself is divided by the Elbe, and you should choose which part to start with.

I suggest starting with Altstadt (the Old Town) to discover the infamous "classic" Dresden. 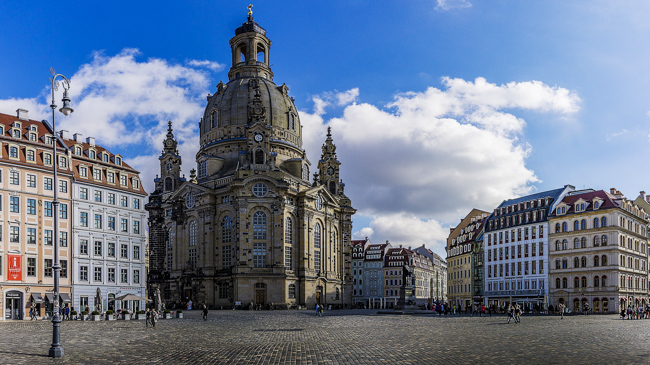 Frauenkirche church survived the bombardment while the whole city was destroyed in one day on February 13, 1945. It has, nevertheless, collapsed shortly after and stayed in ruins for forty years.

Now it's been restored and you can tell between the authentic and modern stones by the color. The darker stones are original and the modern ones have a light-sand color. For € 8 you can go up to the observation deck with a stunning view of the city; you can also enjoy organ concerts often held in the church. The main value of the temple is its magnificent altar which has been restored from more than 2 thousand fragments.

Located on the riverbank, Hofkirche is a Baroque-style cathedral built in the 18th century. Its majestic facade is decorated with 80 stone statues with an equally magnificent bell tower located next to it.

The cathedral's interior is also impressive, the main details being the exquisite altar and Silbermann's organ. Also, 49 representatives of the Vettin dynasty are buried on the cathedral's grounds. 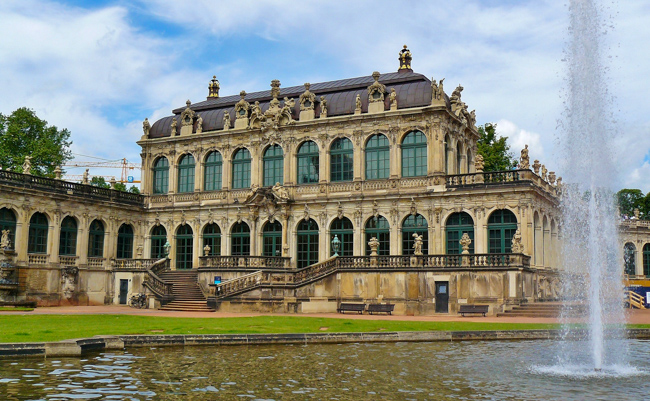 Zwinger is a palace and park complex consisting of four buildings. The construction of this complex started in 1709 and now it houses the Semper Gallery, the Physics and Mathematics Salon, the Porcelain Museum, and the palace's grounds to please visitors with elegant fountains and sculptures.

The Semper Gallery is renowned for one of its collections - Old Masters Gallery which is home to "The Chocolate Girl", "Sistine Madonna", Vermeer and Rembrandt and, in general, the entire collection of world's art masterpieces.

Dresdner Schloss is one of the oldest castles in the city. The first mention of it dates back to the 13th century and since then the castle has been rebuilt numerous times and has acquired modern features in the early 20th century. Today, it is home to 4 collections of precious stones including the largest green diamond in the world. 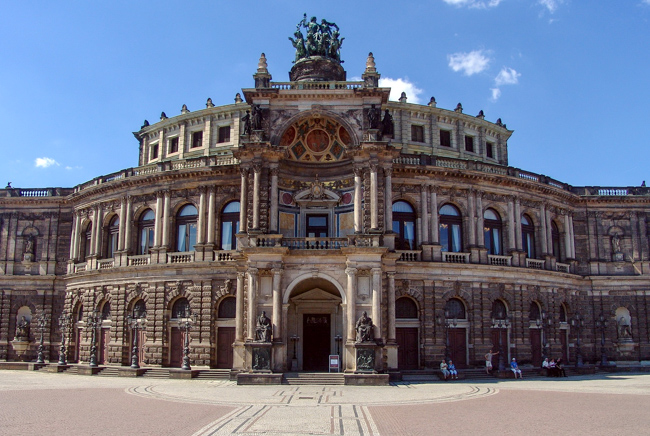 This Dresden State Opera has one of the oldest orchestras in Europe and was once a royal opera. The last restoration of the building took place in 1985 to recreate the construction of the XIX century.

The building of the former tobacco factory of the early 20th century, built in the original "oriental" manner. The construction is crowned by a glass dome, characteristic of mosque architecture, on the sides, there are exhaust pipes disguised as Arabian "minarets". After the factory stopped in 1953, the premises were used to accommodate offices. Currently, there is a restaurant under the dome. 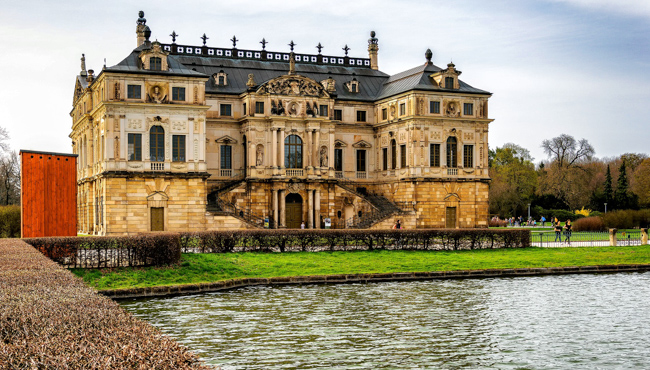 A large park where you can lay on the grass, take a boat around the lake, take a small train around the park itself, or visit a small but cozy Botanical Garden.

Here you can observe the production process through the transparent walls. There are excursions in English (€ 7).

Three castles on the Elbe

Albrechtsberg, Lingner and Erberg Castles are located one after another along the banks of the Elbe, some 2-3km from the city center. There are hotels and restaurants so you can even stay overnight if you like. The castles are surrounded by a large park where you can hang out on the terraces with excellent views of the river and the city.

What to see in Dresden Neustadt

The buildings of Neustadt (literally translated as a new city) are in fact older than in Altstadt (old city). Altstadt was destroyed and rebuilt while Neustadt was almost not damaged during the bombing and preserved authentic buildings of the 19th century.

While the main sightseeing places are in Altstadt, Neustadt is a favorite place of hippies and artists. During the day, there are plenty of art galleries, coffee shops and stores selling handmade stuff, clothes by local designers, books about the farthest islands and other unusual items.

At night, people go out for a drink and sit on the sidewalks (the best place is the intersection of Luisenstrasse and Alaunstrasse), in bars, or parks. You can safely drink alcohol in the street without fear of getting arrested!

The Heart of Neustadt

The square outlined by Konigsbruckerstrasse, Louisenstrasse, Bischofsweg and Kamenzerstrasse is probably the best place in the city to hang out for young people. Its history began in 1990, when young residents decided to arrange their city holiday, wrote a manifesto and announced the creation of the Colorful Republic of Neustadt. The atmosphere of freedom and creativity is still alive here even though the Colorful Republic itself is being revived only at the city festival on the third weekend of June. 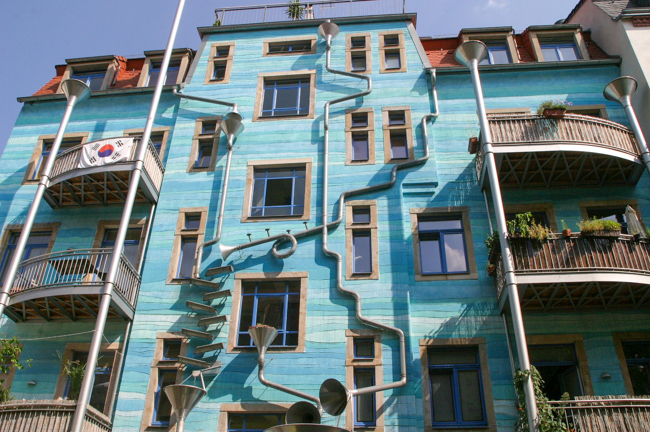 Art passage is a few courtyards between Alaunstrasse, 70 and Gorlitzerstrasse, 23, each of which is decorated in its own way. There is a courtyard with mosaics, a courtyard with an azure house, a green courtyard with a giraffe and other animals. Feel free to go to all the shops - here you will find the best souvenirs from local artists - and stop by a cafe for coffee or beer.

Where to eat in Dresden

Thanks to Dresden's beauty and charm, it is considered one of the best places to get acquainted with German culture and, of course, cuisine. The culinary traditions of Saxony are very strong here. The best news is that prices in Dresden cafes and restaurants are affordable and anybody will get a chance to try traditional German food and local beer. You can start a gastronomic tour of the city with some of these famous places in the Saxon capital.

Milchmadchen (Grunaer Str, 27)
Being located a little away from the main tourist routes and on the outskirts of the Old Town, this is one of the best places for breakfast in Dresden. They can make 20 different types of coffee: from traditional cappuccino to strawberry coffee with milk and you can choose from 9 types of breakfast on the menu.

Zum Bautzner Tor (Hoyerswerdaer Str, 37)
Go to this traditional German cafe with a charming old-fashioned ambiance if you are looking for an inexpensive and nice place to eat. Their menu offers omelets, salads, soups (homemade hodgepodge - €4), schnitzels and steaks, and a huge selection of traditional German side dishes such as potato salad, sauerkraut and many others. Portions are always large! Their specialty is roast pork with sauerkraut and beer sauce for only €11.50 and beers start from €2.

Hellmuts (Eschenstr. 11) is a typical German fast food restaurant with a wide selection of huge hamburgers (their average price is €10).

Falscher Hase (Rudolf-Leonhard-Strasse, 3)
"Fake Rabbit" is an ironic name for a great vegan cafe that features interior items from a flea market, food from farmers' gardens, walls decorated with artworks from local artists.

Scheune (Alaunstrasse 36-40)
It's a complex that includes a cafe, a club and a cultural center. On Mondays, you can attend free jazz concerts by Jazzfanatics. By the way, it is one of the oldest party venues in Dresden - music has been playing here for over sixty years.

Eating absolutely cheaply in Dresden is not that simple: low prices are most often found in fast-food restaurants. Besides that, you can check out the following cafes with German cuisine:

Curry 24 (Wilsdruffer Str. 24)
The most affordable food in Dresden: sausages, french fries and salads - all items are priced €2. A portion of Currywurst with a side dish is enough to get full.

Curry & Co (Louisenstr. 62)
A good snack bar with inexpensive sausages and a variety of sauces, perfect for eating quickly on the go.

Citybeach (Leipziger, 31)
Located on the sandy bank of the Elbe, this bar features a volleyball and table tennis court.

Lebowski bar (Gorlitzer, 5).
A small bar, famous for its White Russian cocktail and the ambiance inspired by The Big Lebowski movie.

Blue note (Gorlitzer, 2B).
The second name for this place is the Jazz department. Come here to drink whiskey and listen to the live blues until dawn - this bar is open all night. Some events are paid.

Despite the destructive bombing of 1945, Dresden managed to survive and flourish later on when its architecture was completely restored. This city is not the most popular travel destination in Germany but it's very much worth visiting!

Inna Nedostupenko is a traveler and writer for the Executive Thrillseeker travel blog. Her blog aims to teach each and everyone how to travel smarter, longer and better! She is an expert in budget travel and is always upfront with trip costs and money-saving tricks. 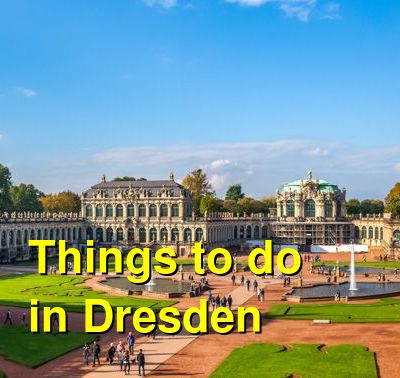