How much does it cost to travel to Whistler?

How much money will you need for your trip to Whistler? You should plan to spend around CA$137 ($109) per day on your vacation in Whistler, which is the average daily price based on the expenses of other visitors. Past travelers have spent, on average, CA$33 ($26) on meals for one day and CA$22 ($17) on local transportation. Also, the average hotel price in Whistler for a couple is CA$143 ($113). So, a trip to Whistler for two people for one week costs on average CA$1,921 ($1,523). All of these average travel prices have been collected from other travelers to help you plan your own travel budget.

A vacation to Whistler for one week usually costs around CA$961 for one person. So, a trip to Whistler for two people costs around CA$1,921 for one week. A trip for two weeks for two people costs CA$3,843 in Whistler. If you're traveling as a family of three or four people, the price person often goes down because kid's tickets are cheaper and hotel rooms can be shared. If you travel slower over a longer period of time then your daily budget will also go down. Two people traveling together for one month in Whistler can often have a lower daily budget per person than one person traveling alone for one week.


How expensive is Whistler? How much money do I need for Whistler?

How much does a trip to Whistler cost? Is Whistler expensive? The average Whistler trip cost is broken down by category here. All of these Whistler prices are calculated from the budgets of real travelers.

What did other people spend on Food in Whistler?

Typical prices for Food in Whistler are listed below. These actual costs are from real travelers and can give you an idea of the prices in Whistler, but your costs will vary based on your travel style.

How much does it cost to go to Whistler? Naturally, it depends on the dates. We recommend SkyScanner because they can find the best deals across all airlines.

The price of renting a car in Whistler will depends on dates, the type of car, the location, and your age. We recommend SkyScanner because they can find the best deals across all car rental companies.

What did other people spend on Entertainment in Whistler?

Typical prices for Entertainment in Whistler are listed below. These actual costs are from real travelers and can give you an idea of the prices in Whistler, but your costs will vary based on your travel style.

Whistler On a Budget 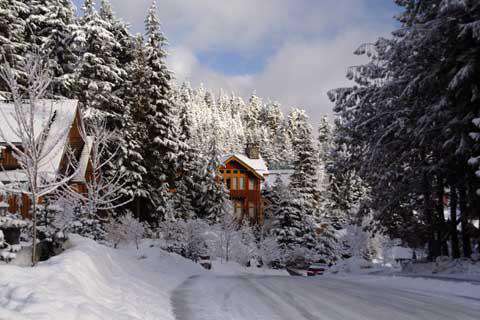 Cabins on the mountain in Whistler, Canada
Located in the province of British Columbia in Canada, Whistler is most famous as the largest ski area in North America. It is also only a short distance from the city of Vancouver, and offers countless opportunities for snow boarding and other winter sports. The town has a permanent population of almost 10,000 and there is a larger seasonal population of workers that come from all over the world. Whistler is a major travel destination with more than two million people visiting the town yearly. As such, there are countless amenities available to visitors. Hotels can vary dramatically in price and quality. There are some budget options, including a couple of hostels in the area, but most people do not visit Whistler as a budget travel destination. It's usually an expensive vacation, but few would argue that it isn't worth the cost.

Whistler's climate has cold and wet winters and dry and warm summers. There is a decent amount of yearly snow and winter temperatures hover around freezing during the day. You can expect snow to be on the ground between December and early April.

Whistler is more about winter sports and activities than it is about specific sights. In general, the area is very beautiful with breathtaking views throughout. The Whistler and Blackcomb Gondolas run year around (with closures for maintenance in October and early November) and offer great views. A visit to Brandywine Falls Provincial Park is also worth the effort. There is a 70 meter waterfall that is a short 15 minute walk from the parking lot.

While the town of Whistler is somewhat sprawling, as a tourist you're likely to spend most of your time in the quaint villages that have sprung up around the base of the ski lifts. You'll find most of the area's restaurants, hotels, and shopping in Whistler Village, the Upper Village, and Whistler Creekside (Old Alpha Lake). These villages are at the base of Whistler and Blackcomb. Village North, or Blackcomb Village, is located at the old base of Blackcomb. It is small, but still has a few amenities. At the old Olympic Village there is a newer town called Cheackamus. This is about 20 minutes from Whistler Village and is where you'll find the Whistler hostel. About 20 minutes north of the Whistler town limits is the town of Pemberton. This is a quiet community where many of the area's workers live.

If you're in the area during the summer months, then mountain biking is the thing to do. Whistler Mountain Bike Park has lifts that carry bikers and bikes up the mountain. Other summer time activities include golf, hiking, and tennis. For easy hiking trails head to Cougar Mountain. If you're looking for a longer hike, go to Brandywine Meadows where there's a six hour hike up steep terrain. For multi-day treks there are a handful of options including Helm Creek trail to Garibaldi Lake and the Black Tusk.

You can find a range of restaurant types around Whistler Village. There's really anything from cheap fast food, which is probably the best option if you're on a budget, to high end, expensive restaurants that usually offer some great views. The on-hill options are also surprisingly reasonably priced. There's a slight mark up, but nothing more than you would expect at any other location. You can get a bowl of udon soup for ten dollars or a salmon steak for twelve dollars.

Many people spend the evenings relaxing in one of Whistler's many bars. It's a great way to rest and enjoy yourself after a long day of skiing. This is also a great way to meet fellow visitors and swap stories. There are many types of drinks available, but if you're a beer drinker, make sure you try the local micro-brewery beer which is always good.

Most people choose to walk around Whistler. You'll find plenty of pedestrian walkways in Whistler Village and the Upper Village. There's also a short trail that connects these areas with Village North as well as a large network of trails that go between many of the area's parks, golf courses and beaches. If you're going anywhere further away, it is best to drive.