How much does it cost to travel to Easter Island?

How much money will you need for your trip to Easter Island? You should plan to spend around CL$61,152 ($75) per day on your vacation in Easter Island, which is the average daily price based on the expenses of other visitors. Past travelers have spent, on average, CL$18,787 ($23) on meals for one day and CL$1,974 ($2.41) on local transportation. Also, the average hotel price in Easter Island for a couple is CL$67,547 ($82). So, a trip to Easter Island for two people for one week costs on average CL$856,121 ($1,044). All of these average travel prices have been collected from other travelers to help you plan your own travel budget.

How much do vacation rentals cost in Easter Island? Prices vary by location, date, size of the place, and the level of luxury. See below for options.

How much does it cost to go to Easter Island? Naturally, it depends on the dates. We recommend Kayak because they can find the best deals across all airlines.

The price of renting a car in Easter Island will depends on dates, the type of car, the location, and your age. We recommend Kayak because they can find the best deals across all car rental companies.

What did other people spend on Entertainment in Easter Island?

Typical prices for Entertainment in Easter Island are listed below. These actual costs are from real travelers and can give you an idea of the prices in Easter Island, but your costs will vary based on your travel style.

Easter Island On a Budget 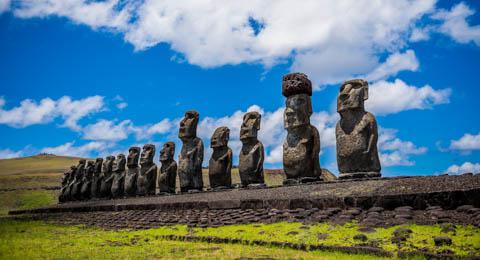 Easter Island, Chile
Although Easter Island is considered a territory of Chile, it is actually located far out in the Pacific, almost halfway to Tahiti. Easter Island is well known, despite being one of the most isolated islands on Earth, because of the mysterious giant stone busts which date back centuries. There are 887 monumental statues, called moai, that were built by the Rapa Nui people. There remains much mystery around the historic Polynesian culture which created the stones, as well as the specific meaning for them.

The island was likely settled by the Polynesian people between 700 and 1100 CE. The civilization thrived until deforestation and a loss of natural resources created challenges. Europeans arrived in 1722 and disease and slave raiding caused the population to drop to 111 by the 1860's from its peak of about 15,000. Today, most of the island and the moai are located within the Rapa Nui National Park. The park was listed as a UNESCO World Heritage List in 1995.

Easter Island's climate is a tropical rainforest with similarities to a humid subtropical climate. The coolest months are July and August when temperatures are in the mid 60s Fahrenheit. The warmest month is February when the average highs are in the low 80s Fahrenheit. Winters are usually mild but the isolated location does expose the island to cool winds. Rainfall is consistent throughout the year with occasional heavy storms during the winter months between June and August.

The most obvious sight on Easter Island are the Moai. It is important to remember that the Moai are both an archaeological structure, but also a sacred sight for many, so take care to show the area respect. Sights are spread throughout the island and the actual abundance of these structures can be surprising. The two most impressive sights to visit are probably the volcanic craters of Rano Kau and Rano Raraku. If you go to the inland quarry of Rano Raraku you can see the moai carvings at varying stages of completion.

Easter Island is about 24.6 kilometers long and 12.3 kilometers wide. The shape is roughly traingular and the area is 163.6 square kilometers. The highest altitude is 507 meters. There are also three freshwater crater lakes on the island: Rano Kau, Rano Raraku, and Rano Aroi.

Most people explore Easter Island as part of a group tour. While private tours are available, they are more expensive and may increase environmental stress so are not recommended.

Many people enjoy trekking on Easter Island. You don't need to hire a guide, but they can help you understand what you are seeing. One popular trek is Terevaka, which is the highest point on the island. Rano Kau, the Northwest coast, and Poike are also popular.

Most of the island's restaurants are found on the main street and around the harbour. Menus are usually limited and most of the food is imported, making prices quite high. You can expect to pay at least US$20 for a dish at even the most budget restaurants. Seafood, particularly fish, is plentiful. There are two species of lobster available as well. The species are protected and there are restrictions on fishing during the off-season. Another excellent option is local tuna.

There are several grocery stores where you can buy supplies on the island. The selection is limited but there are snacks and alcohol available. You usually have to ask the staff for items which they may find in the back. It's best to arrive on the island with your own canned goods, snacks, and drinks. This will save you a significant amount of money.

Despite its extremely isolated location, it is fairly easy to travel to Easter Island as it is served by regular commercial flights. The small island's main industry is tourism. You can fly from either Tahiti (once a week) or Santiago, Chile (daily), but expect to pay highly for the tickets as there is no competition. The only airline currently making the trip is LAN Airlines. Some people choose to include Easter Island on the "round the world" plane ticket. While it is still out of the way, it is somewhat convenient and the cost at least seems, perceptively less.

Easter Island is not a large island so navigating it is fairly easy. You can hire a rental car in Hanga Roa, or it's possible to rent a dirt bike. If you have access to a vehicle, you can actually see most of the island in only a few hours. If you have several days you can also rent a bicycle to explore the island. Do be warned that most of the side roads are dirt and uneven with many potholes, making bicycle riding difficult.

Getting to Easter Islan

By backpackguru in International Transportation
Despite its distant and inconvenient location, Easter Island is more connected than you might realize in the tourist circuit. There are regular commercial flights that make their way to the island, but it does still take over five hours from the nearest continent. The prices can be quite expenses because LAN airlines maintains a monopoly with its route from Tahiti to Santiago, Chile. If you're adventurous and creative there are some other ways to incorporate the island into your trip, but it takes some thorough research.