How much does it cost to travel to Temuco?

How much money will you need for your trip to Temuco? You should plan to spend around CL$60,829 ($73) per day on your vacation in Temuco, which is the average daily price based on the expenses of other visitors. Past travelers have spent, on average, CL$16,911 ($20) on meals for one day and CL$17,703 ($21) on local transportation. Also, the average hotel price in Temuco for a couple is CL$67,133 ($80). So, a trip to Temuco for two people for one week costs on average CL$851,600 ($1,018). All of these average travel prices have been collected from other travelers to help you plan your own travel budget.

A vacation to Temuco for one week usually costs around CL$425,800 for one person. So, a trip to Temuco for two people costs around CL$851,600 for one week. A trip for two weeks for two people costs CL$1,703,200 in Temuco. If you're traveling as a family of three or four people, the price person often goes down because kid's tickets are cheaper and hotel rooms can be shared. If you travel slower over a longer period of time then your daily budget will also go down. Two people traveling together for one month in Temuco can often have a lower daily budget per person than one person traveling alone for one week.


How expensive is Temuco? How much money do I need for Temuco?

How much does a trip to Temuco cost? Is Temuco expensive? The average Temuco trip cost is broken down by category here. All of these Temuco prices are calculated from the budgets of real travelers.

How much do vacation rentals cost in Temuco? Prices vary by location, date, size of the place, and the level of luxury. See below for options.

How much does it cost to go to Temuco? Naturally, it depends on the dates. We recommend Kayak because they can find the best deals across all airlines.

The price of renting a car in Temuco will depends on dates, the type of car, the location, and your age. We recommend Kayak because they can find the best deals across all car rental companies.

Why you need travel insurance and international health insurancePuconSantiagoValparaisoIquiqueArica

Temuco On a Budget 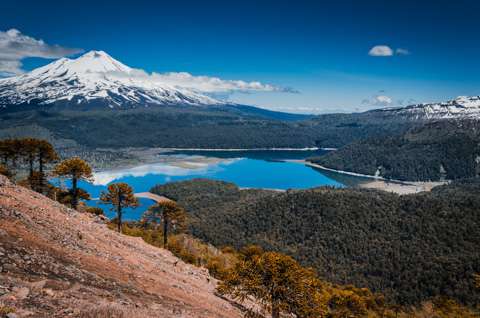 Temuco, Chile
Temuco is a large and modern city found 680 km south of Santiago. While the city is dynamic, it does not have any particular charm with the exception of being a great point of departure for many excursions around the lake region and the many national parks found in the surrounding area. Temuco is also well known for its Mapuche culture, a proud and rebellious community of around 20 000 in the area today, who has fought continuously against every invaders in the past.

The Cerro Nielol is a stunning hill covered in 90 hectares of wild forest found at the heart of the city. Visit the Monumento Natural Cerro Nielol, which opens from 8h to 19h every day and has an entrance fee of USD$2. You will find there an abundance of Copihue (Lapageria Rosea), the national flower of Chile, which grows mainly between March and July. As you wander around the manicured grounds of Plaza Anibal Pinto in the city center, walk up Calle Bulnes to Portales to enter one of Chile's best markets, the Mercado Municipal. Rows of stalls sell high-quality woven ponchos, knitwear, textiles, woodwork, hats, mate gourds, and assorted arts and crafts, but what's really special here is the abundance of silver Mapuche jewelry. Another market worth passing by is the Feria Libre, at Anibal Pinto, which offers a colorful chaos of fruit and vegetable stands. However the highlight here is the traditional Mapuche Indian vendors who come in from reducciones to sell their goods.

It is a good idea to start your trip with a little knowledge about the Araucania population history. For that, head to the Museo Regional de La Araucania. The museum is found in a beautiful pioneers style building dating from 1924 and shows impressive ancient artefacts, such as one of the Mapuche's incredibly long canoe. Opened from 9h30 to 17h30 from Tuesday to Friday, from 11h to 14 on Saturday and from 11h to 14h on Sunday, the entrance fee is only USD$1. Temuco is mainly popular for being so close to the Parque Nacional Conguillio (USD$7 entry fee for adults and USD$4 for children). A beautiful park made of forests, lakes and canyons famous for its reserve of Chilean araucarias trees. A small part of the territory is a ski station but the main attraction of the park is its active 3125m volcano, the Llaima, which last erupted on New Year 2008. We recommend the superb Sierra Nevada trek (7km, 6h return trip) filled with impressive araucarias trees, which starts on the Playa Linda car park. For a short trek, the Canadon Truful-Truful 30 min trek (0.8 km) around the canyons is a great option.

From hearty casseroles, warming soups, flavorful sausages to refreshing shellfish, Chilean cooking is an unmissable experience for any visitor. In traditional Chilean kitchens, preparations are simple and hearty, relying on seasonal ingredients whose flavors speak for themselves. The food of Chile's largest indigenous group is best found in and around the city of Temuco. Mapuche cuisine includes preparations of diguenes, a mild mushroom that grows on tree branches, and pinones, the large, pine-nut-like seeds of the Araucaria, or Monkey Puzzle, Chile's national tree.

Aeropuerto Maquehue is 3 km to the south of Temuco. It is served by airlines such as LAN, Sky, TAM and American Airlines. There is a rail link to the town of Victoria to the north, but bus services are more frequent and serve more destinations. When travelling through Chile, the best option is the bus. The main bus station is the stopping point for most long-distance buses. It has stalls for food and drinks, and many bus companies have ticket booths. Local buses, for example to Pucon or Villarica, often run from one of several smaller terminals. Temuco is positioned on Chile's main north-south road, the Ruta 5, which forms part of the Pan-American Highway. Getting into and out of the city by car is relatively easy. There are also roads heading west, towards Puerto Saavedra on the coast, and east, towards the Andes and some national parks. To the north the next main city is Los Angeles and to the south is Valdivia.