How much does it cost to travel to Iquique?

How much money will you need for your trip to Iquique? You should plan to spend around CL$73,513 ($80) per day on your vacation in Iquique, which is the average daily price based on the expenses of other visitors. Past travelers have spent, on average, CL$25,870 ($28) on meals for one day and CL$17,600 ($19) on local transportation. Also, the average hotel price in Iquique for a couple is CL$65,408 ($71). So, a trip to Iquique for two people for one week costs on average CL$1,029,186 ($1,116). All of these average travel prices have been collected from other travelers to help you plan your own travel budget.

A vacation to Iquique for one week usually costs around CL$514,593 for one person. So, a trip to Iquique for two people costs around CL$1,029,186 for one week. A trip for two weeks for two people costs CL$2,058,373 in Iquique. If you're traveling as a family of three or four people, the price person often goes down because kid's tickets are cheaper and hotel rooms can be shared. If you travel slower over a longer period of time then your daily budget will also go down. Two people traveling together for one month in Iquique can often have a lower daily budget per person than one person traveling alone for one week.


How expensive is Iquique? How much money do I need for Iquique?

How much does a trip to Iquique cost? Is Iquique expensive? The average Iquique trip cost is broken down by category here. All of these Iquique prices are calculated from the budgets of real travelers.

Looking for a hotel in Iquique? Prices vary by location, date, season, and the level of luxury. See below for options.

How much does it cost to go to Iquique? Naturally, it depends on the dates. We recommend Kayak because they can find the best deals across all airlines.

The price of renting a car in Iquique will depends on dates, the type of car, the location, and your age. We recommend Kayak because they can find the best deals across all car rental companies.

Iquique On a Budget 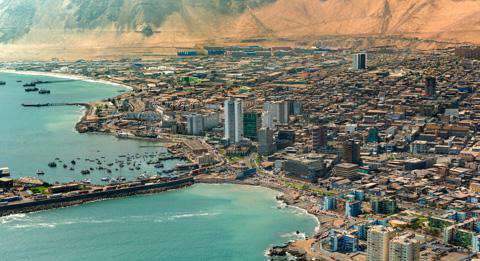 Iquique, Chile
Located in a golden crescent of coastline, the beautiful beach city with an ocean that's several shades of blue and a historic centre that offers the perfect balance of culture and relaxation is counted among Chile's premier beach resorts. The city is home to the duty free zone called "Zofri" and a growing number of high rise resort hotels along its beaches. Slightly more expensive and polluted than neighboring population centers, such as Arica, Iquique and its chaotic duty-free shopping zone (zona franca) have become the perfect summer holiday destination for Chilean families.

Head to Playa Cavancha, the most popular beach in Iquique. Running along the Pacific Ocean, Cavancha is a great place to join in on a game of beach soccer, paddle ball, volleyball, workout on its exercise bars, take a dip in the beautiful ocean or just slowly wander along its boardwalk away from the town center. You must see the Corbeta Esmeralda, a life-size replica of the ship that was sunk by the Peruvians in 1879 during the War of the Pacific, a very important part of the history of Chile. The Battle of Iquique lasted over three hours with the Esmeralda eventually succumbing to a Peruvian ship. You can take a 40-minute tour to see all the quarters of the ship and learn about the battle. Right in the centre of town, directly across from the Clock Tower, you will see the Teatro Municipal de Iquique. Discover how theatrical entertainment operated over a century ago and how special effect where put in place with the pulley systems used to lift the actors from the rafters to the stage into the spotlight. Then walk down the wide, pedestrian-only Calle Baquedano, a great street to wander on for a bite to eat, a drink in the sun or simply to get to the centre of town. The train tracks running down the street's centre and the faded, wooden, saloon-style architecture is reflective of Iquique's mining history. Visit the sea lions waiting at the Caleta Riquelme's wharf edge, to whom the fisherman throw their fish scraps. Or for a get away from town, make the journey north to get the best view of the sunset in the city from the Marinero Desconocido or "Unknown Sailor" statue.

Other than visiting Iquique's famous Duty Free area, a true paradise for shoppers, where you'll find anything from electronics to high-end perfumes, Iquique has a lot of fun activities to offer. The Museo Regional de Iquique is a very diverse and informative museum and it's free!. The museum explains the progression of the Earth from its creation 4.6 billion years ago to the existence and disappearance of the dinosaurs, then to the more specific history of the Chinchorro people and the foundation of Iquique. Located nearby the replica of the ancient ship is the Naval Museum of Iquique, which goes into more detail about the War of the Pacific, as well as other battles fought on Chilean seas. For a spectacular view, head to the Cerro Dragon and perhaps even surf down the gigantic mountain of sand. The view itself from the Cerro Dragon is worth the journey, and a tour that lets you glide down its sand makes this one of the most special sunset experiences you will ever have. Finally, take a bus from the centre of town for a 45-minute journey inland to check out the well-preserved yet completely deserted town of Humberstone, which was declared a UNESCO heritage site in 2005. Named after James Thomas Humberstone, a British chemical engineer who founded the Peru Nitrate Company, the town was developed during the saltpeter rush in the late 1800s, which was also responsible for founding the city of Iquique.

Enjoy amazing food in Iquique's restaurants with ocean views. Try the traditional mango sour, a drink based on the creamy tropical fruit which is abundant in the region together with the guayaba, grapefruit and lemons which grow in its oasis. Taste some delicious ceviche, and other fish dishes. Or fall or a Chumbeque, a traditional sweet of Iquique which has been around since 1920 and is as much a part of the city as the beach is. It has three layers of a type of biscuit originally filled with LimÃ³n de Pica, a type of small lemon from Pica.

Many flights from Iquique's Diego Aracena International Airport connect daily with Santiago and other main cities in the country. International flights are offered to Peru, Bolivia and Argentina. Iquique is also well deserved by bus companies with several daily arrivals from Arica, Antofagasta, Calama and Santiago. The 'main terminal' north of the centre serves most destinations, but quite a few buses from Arica pull in close to the central mercado at the intersection between Calle Barros Arana and Thomson. 'Tur-bus' have their own terminal on Calle Esmeralda. There are also buses arriving from La Paz, Oruro and Cochabamba in Bolivia. When travelling around the city, collective buses (micros) run along the major streets in the center and will bring you to the Zofri very quickly. Walking is the most convenient mode of transport for getting to and from the beaches. You can also share a taxi for around USD$1, depending on the trip's length or get a private taxi for around USD$4, which is faster than taking the bus (USD$75). You can of course access Iquique with your car by the Pan American highway going north or south. Arica, on the border with Peru, is 307 km north. Calama is 389 km southeast and Santiago is 1843 km south. By sea, Iquique is also a port where number of cruise lines drop passengers who want to enjoy the duty free shopping, local restaurants and great sights!