How much does it cost to travel to Lijiang?

How much money will you need for your trip to Lijiang? You should plan to spend around ¥240 ($33) per day on your vacation in Lijiang, which is the average daily price based on the expenses of other visitors. Past travelers have spent, on average, ¥97 ($14) on meals for one day and ¥32 ($4.51) on local transportation. Also, the average hotel price in Lijiang for a couple is ¥180 ($25). So, a trip to Lijiang for two people for one week costs on average ¥3,361 ($468). All of these average travel prices have been collected from other travelers to help you plan your own travel budget.

A vacation to Lijiang for one week usually costs around ¥1,680 for one person. So, a trip to Lijiang for two people costs around ¥3,361 for one week. A trip for two weeks for two people costs ¥6,721 in Lijiang. If you're traveling as a family of three or four people, the price person often goes down because kid's tickets are cheaper and hotel rooms can be shared. If you travel slower over a longer period of time then your daily budget will also go down. Two people traveling together for one month in Lijiang can often have a lower daily budget per person than one person traveling alone for one week.


How expensive is Lijiang? How much money do I need for Lijiang?

How much does a trip to Lijiang cost? Is Lijiang expensive? The average Lijiang trip cost is broken down by category here. All of these Lijiang prices are calculated from the budgets of real travelers.

Looking for a hotel in Lijiang? Prices vary by location, date, season, and the level of luxury. See below for options.

How much does it cost to go to Lijiang? Naturally, it depends on the dates. We recommend Kayak because they can find the best deals across all airlines.

The price of renting a car in Lijiang will depends on dates, the type of car, the location, and your age. We recommend Kayak because they can find the best deals across all car rental companies.

What did other people spend on Food in Lijiang?

Typical prices for Food in Lijiang are listed below. These actual costs are from real travelers and can give you an idea of the prices in Lijiang, but your costs will vary based on your travel style.

What did other people spend on Water in Lijiang?

Typical prices for Water in Lijiang are listed below. These actual costs are from real travelers and can give you an idea of the prices in Lijiang, but your costs will vary based on your travel style.

Reviews of the Best Hostels in Lijiang, ChinaKunmingDaliJinghongDeqinShangri-La

Lijiang On a Budget 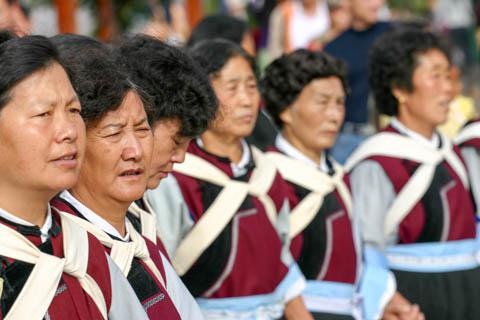 The Naxi people in traditional attire, Lijiang, China
Lijiang is a city in Southwestern China with a history of rule under the Mu family during the Ming and Qing dynasties. It played a key role along the Ancient Southern Silk Road, which started from Burma, crossed Lijiang, Shangri-La County, Tibet, journeyed through Iran, the Fertile Crescent, and ultimately to the Mediterranean Sea. The area was once a center for trade, politics, culture, and education, which is still evident in the rich culture seen today. Lijiang has also been the home of centuries to the Naxi people who still inhabit the area.

Some of the most inspiring sights of Lijiang exist in the natural scenery of the surrounding area. The looming presence of Jade Dragon Snow Mountain, for example, has long influenced Naxi legend and holy beliefs. Its 13 snow-covered peaks are a sanctuary for rare animals and wild plants as well as a famous scenic spot for visitors. Lashi Lake, on the southern slope of the Jade Dragon Snow Mountain, is another beautiful site of the region. Being a part of the Lijiang-Lashihai Plateau Wetland Nature Reserve, it is paradise for migrant birds. It is also the origin for the Ancient Tea and Horse Road, an important trading route that visitors can experience on horseback. The sweeping fields of the Spruce Plateau also sit at the base of the mountain. Surrounded by woodland, the meadow is quiet and beautiful and frequented by wildlife like yak, scalpers, and goats. The plateau is regarded by the Naxi people as an entrance to the heaven of the heart, a place where people can love and be together freely.

Lijiang Old Town is a well-preserved ancient city of thriving culture. Named a UNESCO Heritage Site in 1997, the town has become a famous tourist attraction for seeing ethnic culture and customs, charming architecture, and beautiful natural views. Dating back more than 800 years, built amongst strong mountains and flowing rivers, Lijiang Old Town was once the political, cultural, and educational center with a very important role in trading activities of the area. Remnants of this past are still evident in its diverse market of handicrafts, decorative gardens, and traditional houses. Square Street (or Sifangjie) marks the center of town with four main streets branching in outward directions. The roads are paved in local bluestones with many winding lanes throughout. With a livelihood that depends highly on water, there are also aqueducts through town that allow willow trees to flourish.

If you prefer a quieter cultural experience, Baisha Village is about 4.9 miles (8km) to the north of Lijiang Old Town at the foot of the Jade Dragon Snow Mountain. Less commercialized than the Old Town, here you can experience the peaceful daily life of the Naxi people. Shuhe Ancient Town is also an important site of Lijiang as it is a well-preserved example of a town along the ancient tea route and one of the earliest settlements of the ancestors of Naxi people.

With all of the natural features surrounding Lijiang, there is much opportunity for outdoor activity. In addition to being a popular scenic spot, the Jade Dragon Snow Mountain is also a locus for mountaineering, skiing, exploration, and scientific research. Lashi Lake is also a great spot for sightseeing, spying birds and other wildlife by boating across its surface. With mountains, lakes, plateaus, and even parks throughout the city, Lijiang is an ancient site built in reverence for the surrounding nature.

On the cultural side of things for food, shopping, entertainment, and otherwise, any of Lijiang's towns and villages have much to offer. Old Town especially serves as a commercial center for visitors with plenty of options for sampling traditional cuisine, busy markets with local handicrafts, as well as architectural gems of the Naxi people. Their captivating culture is also known to display talents in poetry, calligraphy, painting, and music. There are many dancing and musical performance held throughout the city, one of the most popular being the Lijiang Impressions Show. Impression Lijiang is a magnificent outdoor singing and dancing performance demonstrating the tradition and lifestyle of the local ethnic people. With the Jade Dragon Snow Mountain as the backdrop, the performance displays ethnic costumes and accessories along with singing, dancing, horse riding, and drumming. Held twice a day, the performance is a cultural experience not to be missed.

Local dishes consist of traditional cuisine of the Naxi people. Jidou Liangfen (a kind of jelly made from chick pea) is one of the favorite snacks of locals, as is Baba, a kind of fried potato cake that is eaten with seasoning. Others such as Bingfenliangxiao (a tasty and refreshing dessert) and butter tea are also popular with visitors. The Naxi people also have a banquet of 39 courses to entertain distinguished guests. A banquet such as this and other traditional fare can be found at Rongpo Restaurant, located in Xinhua Street in the Old Town. Square Street is also an ideal location for sampling the local snacks. Some popular restaurants include Hua Hua Shen Restaurant, Naxi Yinshi Wenhua Cheng (Naxi Food and Culture City) which also features dancing and singing, traditional Muslim food at Ha's Beef Restaurant in Old Town, and western cuisine at the Lijiang Guanfang Hotel or Mamafu's Restaurant.

Lijiang Airport is located in the south of Lijiang city, 28 km (17 mi) away from downtown. There is an airport shuttle bus service in downtown Lijiang. Flights go to Kunming, Chengdu, Xishuangbanna, Beijing, Shanghai, Guangzhou, Wuhan, Shenzhen, Xiamen via Chongqing and Guiyang.