How much does it cost to travel to Tiger Leaping Gorge?

Looking for a hotel in Tiger Leaping Gorge? Prices vary by location, date, season, and the level of luxury. See below for options.

How much does it cost to go to Tiger Leaping Gorge? Naturally, it depends on the dates. We recommend Kayak because they can find the best deals across all airlines.

The price of renting a car in Tiger Leaping Gorge will depends on dates, the type of car, the location, and your age. We recommend Kayak because they can find the best deals across all car rental companies.

Tiger Leaping Gorge On a Budget 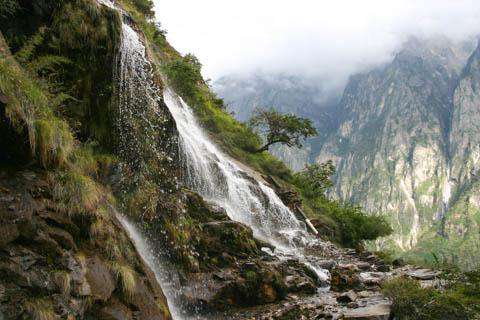 Tiger Leaping Gorge, Yunnan province, China
One of the deepest gorges in the world, Tiger Leaping Gorge gets its name from legend, where a tiger used a great rock in the center of the gorge as a stepping stone to leap from one side to the other. It is surrounded by stunning mountain scenery on either side with the Yangtze River rushing down through its center. Visitors come to Tiger Leaping Gorge to hike and witness its natural beauty.

At Tiger Leaping Gorge, the scenery of the place steals the show. The gorge itself is one of the deepest in the world, measures about 18 kilometers long, and is divided into three segments called Upper Gorge, Middle Gorge, and Lower Gorge. The town of Qiaotou is located at the Upper Gorge and is where most people begin their hikes. The Yangtze River then cuts through the depths of the gorge changing from narrow rapids to twists and turns and wider swirling whirlpools all the way through to the end of the gorge in the town of Daju. In Yunnan, this river is also called the Golden Sands River and is one of the most important in China. Either side of the gorge is shadowed by Jade Dragon Snow Mountain to the east and Haba Snow Mountain to the west, standing majestically in the distance with lovely snowcapped peaks.

The area is also an ecological hotspot with many rare species of plants and animals that call the gorge home. Due to its environmental richness and sheer natural beauty, Tiger Leaping Gorge was named an UNESCO World Heritage Site in 2007.

Tiger Leaping Gorge is bookended by a town on either end, Qiaotou at the Upper Gorge and Daju at the Lower Gorge. Both are small towns with some accommodations and dining options, however, if you are looking to spend a day getting lost in the city culture of the area, you may want to find your way to Lijiang about 60 kilometers south of the gorge.

Several small villages can be found in the gorge, and this is where most hikers find food and accommodation along their hike (thus eliminating the need for camping equipment).

Most people come to Tiger Leaping Gorge with the intention of hiking the High Trail which runs the length of the valley. The hike is not too strenuous if you take your time, spreading the journey out along two days. The recommended route is to hike from Qiaotou to Halfway Guesthouse on the first day, about 17 kilometers taking 6 hours. A good stopping point along the way is to have lunch at the Naxi Family Guesthouse. On day two, you can then hike the rest of the trail from Halfway Guesthouse to Lower Tiger Leaping Gorge, passing waterfalls and canyons, and then taking a ferry across the river to end in the town of Daju. The best times to hike are in October, November, and May. June to September is the most dangerous time to hike as it is the rainy season, while the winter months are very cold.

Local dishes consist of traditional cuisine of the Naxi people. Jidou Liangfen (a kind of jelly made from chick pea) is one of the favorite snacks of locals, as is Baba, a kind of fried potato cake that is eaten with seasoning. Others such as Bingfenliangxiao (a tasty and refreshing dessert) and butter tea are also popular with visitors. The Naxi people also have a banquet of 39 courses to entertain distinguished guests. A banquet such as this and other traditional fare can be found at Rongpo Restaurant, located in Xinhua Street in the Old Town of Lijiang. Lijiang's Square Street is also an ideal location for sampling the local snacks. There are also dining options in Qiaotou and Daju on either end of the gorge, as well as a few stops on the trail itself like the Naxi Family Guesthouse and the Halfway Guesthouse which also provide beautiful scenic views and overnight accommodations.

From Lijiang, visitors can take a bus to Qiaotou where most hikes into Tiger Leaping Gorge begin. Bus routes from Lijiang to Shangri-La stop in Qiaotou. There are also buses to and from Dali, running every half hour from 7am to noon.

Before beginning the hike, visitors must stop at the ticket office in Qiaotou (Â¥65, or cheaper for students with a valid ID).