How much does it cost to travel to Deqin?

How much money will you need for your trip to Deqin? You should plan to spend around ¥367 ($51) per day on your vacation in Deqin, which is the average daily price based on the expenses of other visitors. Past travelers have spent, on average, ¥92 ($13) on meals for one day and ¥105 ($15) on local transportation. Also, the average hotel price in Deqin for a couple is ¥409 ($57). So, a trip to Deqin for two people for one week costs on average ¥5,138 ($721). All of these average travel prices have been collected from other travelers to help you plan your own travel budget.

A vacation to Deqin for one week usually costs around ¥2,569 for one person. So, a trip to Deqin for two people costs around ¥5,138 for one week. A trip for two weeks for two people costs ¥10,275 in Deqin. If you're traveling as a family of three or four people, the price person often goes down because kid's tickets are cheaper and hotel rooms can be shared. If you travel slower over a longer period of time then your daily budget will also go down. Two people traveling together for one month in Deqin can often have a lower daily budget per person than one person traveling alone for one week.


How expensive is Deqin? How much money do I need for Deqin?

How much does a trip to Deqin cost? Is Deqin expensive? The average Deqin trip cost is broken down by category here. All of these Deqin prices are calculated from the budgets of real travelers.

Looking for a hotel in Deqin? Prices vary by location, date, season, and the level of luxury. See below for options.

How much does it cost to go to Deqin? Naturally, it depends on the dates. We recommend Kayak because they can find the best deals across all airlines.

The price of renting a car in Deqin will depends on dates, the type of car, the location, and your age. We recommend Kayak because they can find the best deals across all car rental companies.

Deqin On a Budget 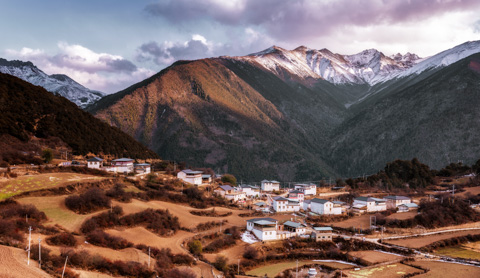 Deqin, China
Highly influenced by Tibet, Deqin is both a county and a town located in the Hengduanshan Mountains of China's Yunnan province. Most people visit the area as a home base from which to hike into the surrounding mountains, though the temples and traditional villages also add to the allure of the area.

The sights worth seeing of Deqin and the surrounding area are mostly its natural scenery. Meili Xue Shan or Mainri Snow Mountain is the mountain range that steals the show. Many embark on treks to its snowy peaks or to the Mingyong Glacier (which can also be reached by car). The mountains are bordered by the Salween River to the west and the Mekong River to the east which is another popular route for trekking. You can find great views of the mountain range from Feilai Temple, located only 10 kilometers away from Deqin. The temple also has a number of hostels and guest houses for an alternative to those available in Deqin.

On the cultural side of things, many choose to take the journey to Yubeng Village. Since it is not accessible by any vehicles, you can take a mini bus from Fei Lai Si to Xidang Hot Springs where the hike actually starts. From here, the hike is about 9 kilometers one way taking about 6-7 hours for most people, though you can hire a horse or mule if you are not up for the walk. The village itself is divided into Upper Yubeng and Lower Yubeng, nestled into a valley surrounded by snowy peaks, thick forests, and waterfalls. From the village, you can take other hikes into the Sacred Waterfall or Ice Lake.

Deqin is the last town before Tibet proper in Yunnan province. Being mainly a hiker's town, there are minimal attractions with amenities including a range of small restaurants, a handful of cafes, some shops, and a few hotels and youth hostels. Before taking the ride to Deqin many visitors first arrive in Shangri-La, whose Old Town dates back more than a millennium with temples and monasteries exhibiting Tibetan architecture with bold white, dazzling gold, and striking reds. On the outskirts of civilization, between Shangri-La and Deqin, there are also a number of small Tibetan villages with opportunities for experiencing the more traditional ways of living. Here you can get a closer look at the primary occupations of farming and local craft-making.

As mentioned before, Deqin is a place where people come to hike. The mountains themselves are known as the Meilixue Mountain Nature Reserve, and there are many opportunities to trek to destinations like the Mingyong Glacier, Tazi Temple, and Yubeng Village. At the village, visitors can immerse themselves in traditional culture, staying in quaint guest houses and enjoying the peace of the remote countryside. There are even more hikes from the village to explore the natural gems of the surrounding valley in dense forests and cascading waterfalls. Some people also trek along the Mekong River which follows the eastern boundary of the mountain range. In Deqin and the nearby villages, some locals know the trails well and can give advice on hiking in the area.

When it comes to food, Deqin is highly influenced by Tibetan cuisine which is largely limited to barley, meat (usually mutton or yak), and dairy products. Very few spices and vegetables are used in the cooking, though most dishes are served with a very hot chili sauce on the side. Tibetan cured pork, or Pipa Meat, is also common as is yak butter tea which can be served sweet or salted. Many locals often mix the tea with barley flour to create a staple meal known as tsampa. Other common dishes include momos or dumplings and a noodle soup known as thukpa. Ginger lemon tea is also popular. In Deqin, there are a number of small restaurants on the main street serving good food. If you seek western fare, try Tulange Cafe in the main tiled square in town.

Most visitors fly into the area arriving at Diqing Shangri-La Airport. To reach Deqin from here, there are four buses that leave in the morning from Shangri-La with the town of Benzilan as a midway stop to break up the journey. The drive is about 5 hours through steep mountain roads and alpine scenery.

The bus terminal in Deqin also operates buses to and from Lhasa, taking about 3-4 days.

Once in Deqin there is one through road winding down from the north.