How much does it cost to travel to Mount Kailash?

How much money will you need for your trip to Mount Kailash? You should plan to spend around ¥411 ($57) per day on your vacation in Mount Kailash, which is the average daily price based on the expenses of other visitors. Past travelers have spent, on average, ¥142 ($20) on meals for one day and ¥181 ($25) on local transportation. Also, the average hotel price in Mount Kailash for a couple is ¥313 ($44). So, a trip to Mount Kailash for two people for one week costs on average ¥5,754 ($801). All of these average travel prices have been collected from other travelers to help you plan your own travel budget.

Looking for a hotel in Mount Kailash? Prices vary by location, date, season, and the level of luxury. See below for options.

How much does it cost to go to Mount Kailash? Naturally, it depends on the dates. We recommend Kayak because they can find the best deals across all airlines.

The price of renting a car in Mount Kailash will depends on dates, the type of car, the location, and your age. We recommend Kayak because they can find the best deals across all car rental companies.

Mount Kailash On a Budget 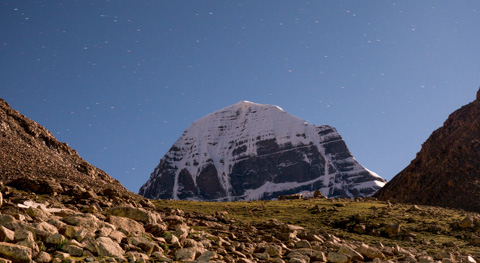 Mount Kailash
The main point of entry to Mount Kailash is a small village called Darchen. Once an important sheep station for nomads and their flocks, the village has now grown to provide for the pilgrims wishing to embark towards Mount Kailash and Lake Manasarovar. It contains a number of guest houses and restaurants as well as a hotel where pilgrims must get permission from the Public Security Bureau to make the trek around the mountain. Also in the village are a handful of small stores and kiosks, as well as some grounds for camping. It is about 330 km (a one-day bus drive) from the town of Shiquanhe to the northeast, where Gunsa Airport is located, offering flights twice a week to Lhasa and Chengdu.

Those who come to Mount Kailash come to embark on a pilgrimage. There are two circuits in the area-one being the Mount Kailash Kora, the other the Lake Manasarovar Kora. The first involves making circuits around Mount Kailash, generally taking about three days to do so for the regular visitor. Each religion, however, has its own methods. Buddhists and Hindus, for example, travel clockwise around the mountain, while Bonpos travel counter-clockwise. Some make the 52-kilometer journey in a day, while others remain seeking enlightenment from the mountain for weeks.

The second pilgrimage circuits around Lake Manasarovar. With a distance just over 100 kilometers, this pilgrimage path takes about 4 to 5 days to complete. A good starting point for this trek is at Chiu Gompa, located 30 kilometers south of Darchen.

Traditional Tibetan cuisine is largely limited to barley, meat (usually mutton or yak), and dairy products. Very few spices and vegetables are used in the cooking, though most dishes are served with a very hot chili sauce on the side. Along the trekking route of Mount Kailash, there are a few local restaurants and guest houses to accommodate visitors, so tourists do not have to prepare their own food and tents. Choices, however, are limited and it may be wise to bring a supply of your own as back up. Traditionally, pilgrims only eat vegetarian food in the region due to its proximity to the sacred Lake Manasarovar and Mount Kailash. Some traditional fare of the region might include:

As mentioned earlier, the village of Darchen is the entry point for Mount Kailash. There are only four routes available to reach it by land. From the Indian border there is a route that follows Delhi-Haldwani-Dharchula-Lipu Lekh-Purang, from Shigatse it can take 4 to 6 days via hired jeep depending on the route, there is a route from Kashgar through Ngari, and one from Simikot/Hilsa in Nepal through Purang.

If you fly into Gunsa Airport, serving the town of Shiquanhe in Ngari Prefecture, you are only a one-day bus ride away from reaching Darchen at the base of the Mount Kailash passage.