A Travel Price Comparison for France Carcassonne vs. Mont-Saint-Michel for Vacations, Tours, and Honeymoons

Should you visit Carcassonne or Mont-Saint-Michel?

Which city should you visit? Read on to compare the prices of travel for Carcassonne and Mont-Saint-Michel. We’ll break down costs for accommodation, food, transportation and more to help you learn more about these two destinations. Then, you can figure out if either of these two places are accessible based on your travel budget. So, let's dig into it.

Carcassonne is a hilltop town in southern France. Inhabited since the Neolithic period, Carcassonne is located in the Aude plain between historic trade routes, linking the Atlantic to the Mediterranean sea and the Massif Central to the Pyrenees. The Romans recognized its strategic importance and occupied its hilltop until the demise of the Western Roman Empire and was later taken over in the fifth century by the Visigoths who founded the city. Its desirable location led successive rulers to expand its fortifications until the Treaty of the Pyrenees in 1659. It is famous for its medieval citadel, La Cite, which has numerous watchtowers and double-walled fortifications. The first walls were built in Gallo-Roman times, with major additions made in the 13th and 14th centuries. With its position on a rocky hilltop, zigzag battlements, stout walls and spiky turrets, the fortified city of Carcassonne looks like something out of a children's storybook when it's seen from afar. A Unesco World Heritage Site since 1997, it's most people's idea of the perfect medieval castle. It attracts over four million visitors every year, peaking in high summer. Time your visit for late in the day (or even better in spring or fall) to truly appreciate the old town's medieval charm.

Which city is cheaper, Mont-Saint-Michel or Carcassonne?

The average daily cost (per person) in Carcassonne is €85, while the average daily cost in Mont-Saint-Michel is €125. These costs include accommodation (assuming double occupancy, so the traveler is sharing the room), food, transportation, and entertainment. While every person is different, these costs are an average of past travelers in each city. Below is a breakdown of travel costs for Carcassonne and Mont-Saint-Michel in more detail.

For a normal double-occupancy room in Carcassonne, €98 is the average cost for a hotel room. Also in Carcassonne, the typical price for a place to stay for one person is €49, such as in a hostel.

While meal prices in Carcassonne can vary, the average travelers spends about €31 per day on food. Based on the spending habits of previous travelers, when dining out, an average meal in Carcassonne should cost around €12 per person. Breakfast prices are usually a little cheaper than lunch or dinner. The price of food in sit-down restaurants in Carcassonne is often higher than fast food prices or street food prices.

To get around in Carcassonne, the average visitor spends €5.71 per day, per person. This includes the costs of taxi rides and private drivers as well as public transportation, which tends to be much more affordable.


Hired Cars and Shuttles in Mont-Saint-Michel

Is it cheaper to fly into Carcassonne or Mont-Saint-Michel?

Prices for flights to both Mont-Saint-Michel and Carcassonne change regularly based on dates and travel demand. We suggest you find the best prices for your next trip on Kayak, because you can compare the cost of flights across multiple airlines for your prefered dates.

In Carcassonne, the costs for things to do, activities, admission tickets, and other sightseeing expenses are on average €11 per person, per day.


Tours and Activities in Carcassonne

For Carcassonne, here are a few prices for actual activities, tours, and tickets provided by various companies:


Sample the Local Flavors in Carcassonne

Some specific costs for nightlife related activities in Carcassonne:

The Best Hostels in Carcassonne, FranceParisMarseilleLyonToulouseNice 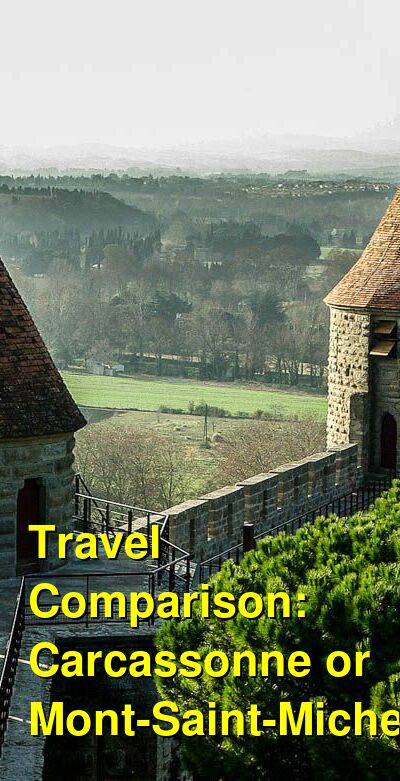