How much does it cost to travel to Calais?

How much money will you need for your trip to Calais? You should plan to spend around €111 ($131) per day on your vacation in Calais, which is the average daily price based on the expenses of other visitors. Past travelers have spent, on average, €28 ($34) on meals for one day and €38 ($45) on local transportation. Also, the average hotel price in Calais for a couple is €124 ($147). So, a trip to Calais for two people for one week costs on average €1,553 ($1,839). All of these average travel prices have been collected from other travelers to help you plan your own travel budget.

A vacation to Calais for one week usually costs around €777 for one person. So, a trip to Calais for two people costs around €1,553 for one week. A trip for two weeks for two people costs €3,106 in Calais. If you're traveling as a family of three or four people, the price person often goes down because kid's tickets are cheaper and hotel rooms can be shared. If you travel slower over a longer period of time then your daily budget will also go down. Two people traveling together for one month in Calais can often have a lower daily budget per person than one person traveling alone for one week.


How expensive is Calais? How much money do I need for Calais?

How much does a trip to Calais cost? Is Calais expensive? The average Calais trip cost is broken down by category here. All of these Calais prices are calculated from the budgets of real travelers.

Find a hostel, guesthouse, or B&B in Calais

How much does it cost to go to Calais? Naturally, it depends on the dates. We recommend SkyScanner or Kayak because they can find the best deals across all airlines.

Calais On a Budget

Calais, France
Calais is a port city in northern France located across the English Channel from the clifftop town of Dover It's the principal ferry crossing point between France and England. Its old town, Calais-Nord, sits on an artificial island surrounded by canals.

Calais is a Cultural Link to Europe, just a hop, skip and a jump away from Belgium and England, on the Opal Coast in the Nord-Pas-de-Calais region. The city of Calais is exceptionally located between sea and countryside. Calais is renowned for its lace, which can be found in haute-couture designs. Preserved natural spaces abound with its 23 km of coastline, rugged cliffs, breathtakingly diverse terrain, and coastal villages. Whether on foot, bike or horseback, and even in the water along the coast, there is plenty to do to make this a great option for a visit!

Place d'Armes is one of the largest squares in the city of Calais. It adjoins the watchtower, and during medieval times was once the heart of the city. While Calais was a territory of England, it became known as Market Square. Only at the end of English rule did it take the name of Place d'Armes. After the reconquest of Calais in 1558 by Francis, Duke of Guise, Francis II gave Calais the right to hold a fair twice a year on the square, which still exists today, as well as a bustling Wednesday and Saturday market.

The Hotel de Ville, the distinctive town hall, dominates the town center, which has seen significant regeneration over the past decade. It was built in the Flemish Renaissance style between 1911 and 1925 to commemorate the unification of the cities of Calais and Saint Pierre in 1885. One of the most elegant landmarks in the city, its ornate clock tower and belfry can be seen from out to sea and chimes throughout the day. The hall has stained glass windows and numerous paintings and exquisite decor.

Eglise Notre-Dame is a cathedral which was originally built in the late 13th century and its tower was added in the late 14th or early 15th century. Like the town hall, it is one of the city's most prominent landmarks. It was arguably the only church in the English perpendicular style in France. It contains elements of Flemish, Gothic, Anglo-Norman and Tudor architecture.

The Citadel of Calais, located on the Avenue Pierre Coubertin, was built between 1560 and 1571 on the site of a former medieval castle which was built in 1229 by Philippe de Hureprel. Its purpose was to fend off would-be invaders, but it wasn't long until the city was successfully invaded by Archduke Albert of Austria.

Fort Risban, located on the coast on the Avenue Raymond Poincare at the port entrance, was built by the English to prevent supplies reaching Calais by sea during the siege in November 1346 and continued to be occupied by them until 1558 when Calais was restored to France.

Calais is the largest port in mainland Europe and its coastline, the Cote d'Opale (Opal Coast), includes 8 kilometers of attractive sandy beaches. The city is divided into two parts - the old town (Calais-Nord) and the modern town (St-Pierre). Visitors are welcomed to both neighborhoods with a thriving community with excellent shopping options including several large supermarkets, wine stores, fashion boutiques, patisseries, gourmet food shops and markets with colorful displays of local produce. Whether touring the area enjoying the Pas de Calais' cultural heritage, on a shopping spree, or just visiting for a short break, Calais offers a wide variety of bars, cafes, restaurants and hotels in which to relax and enjoy the French way of life.

There's plenty to do in Calais town in the department of Pas-de-Calais if you're on a day trip or a longer visit - you'll find plenty to occupy your time. The region features many leisure and wildlife parks, which are great for the family. One spot in particular, the Nausicaa, hosts the greatest aquarium in the whole region. Cyclists can enjoy riding on the famous cobblestones of Paris-Roubaix, while others can enjoy hot air ballooning at the Montgolfiades de Lille (where the competition takes place), or fly a kite at the International Kite Meeting in Berck-sur-Mer. Plenty of festivals and events take place throughout the year in the region, from the unique Wazemmes accordion festival in May, and the booming Dunkerque carnival in February.

See a piece of history. At the place du Soldat in front of Calais Town Hall you'll find Rodin's masterpiece and monument to the bravery of six men of Calais. Rodin's 'Burghers of Calais' illustrates an ancient story of six distinguished citizens of Calais, who in 1347, during the Hundred-Years War with England, volunteered themselves into captivity of King Edward III to save their besieged town.

Enjoy a day at the beach. You might be surprised to discover a lovely sandy beach at Calais beach. Clean, safe and ideal for a picnic or relaxing and watching the ferries going to and fro between the ports of Calais and Dover. There are plenty of restaurants, a funfair, activities for the family including mini-golf and the beach is a glorious sight with its white beach huts.

A blend of Flemish and Picard influences, the cuisine in the Calais region boasts produce that is unique to the area, such as endives. The top specialties of the region are the Carbonade Flamande (a sweet and sour beef and onion stew made with beer), rabbit with prunes, and Potjevleesch (potted meat). Choose from the artisanal beers and local liquors, such as genievre (made with juniper), to accompany your food. The cheeses of the region are full of character, especially the Vieux-Lille and the strong cow's-milk cheese Maroilles (orange in color), which is used to make the local savory tart called the Flamiche. The famous moules-frites should be eaten with your fingers, fresh from a chip stand.

Calais is connected to Dover in England by ferry services. Ferry crossings between Dover and Calais take typically around 1 hour 30 mins. Ferries operate 24 hours per day - on up to 41 sailings daily. Calais is also connected by train to England via the underground tunnel, and is also accessible from other part of Europe by rail. There are bus routes available to Calais as well, and it is easily accessible by car through direct link to the French autoroute system. Most people travel by car around the town, but there is a comprehensive network of buses running from the town center to the suburbs and Cite Europe. The port is served by a special shuttle bus, although via a footbridge the center and the harbor terminal are only 15 min apart. There is a free minibus service called Balad'in, which runs in the center of Calais. The buses are bright yellow/blue and easy to spot. They stop at yellow Balad'in bus stops every 12 minutes from Jardin des Plantes to Matelote (near the lighthouse) via the Calais-Ville train station. 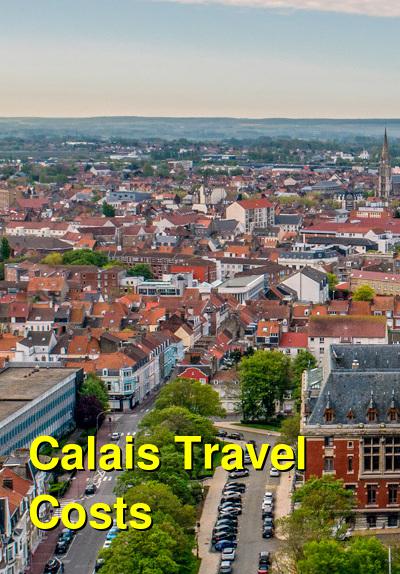