How much does it cost to travel to Honfleur?

How much money will you need for your trip to Honfleur? You should plan to spend around €118 ($129) per day on your vacation in Honfleur, which is the average daily price based on the expenses of other visitors. Past travelers have spent, on average, €46 ($50) on meals for one day and €24 ($26) on local transportation. Also, the average hotel price in Honfleur for a couple is €112 ($122). So, a trip to Honfleur for two people for one week costs on average €1,656 ($1,800). All of these average travel prices have been collected from other travelers to help you plan your own travel budget.

A vacation to Honfleur for one week usually costs around €828 for one person. So, a trip to Honfleur for two people costs around €1,656 for one week. A trip for two weeks for two people costs €3,312 in Honfleur. If you're traveling as a family of three or four people, the price person often goes down because kid's tickets are cheaper and hotel rooms can be shared. If you travel slower over a longer period of time then your daily budget will also go down. Two people traveling together for one month in Honfleur can often have a lower daily budget per person than one person traveling alone for one week.


How expensive is Honfleur? How much money do I need for Honfleur?

How much does a trip to Honfleur cost? Is Honfleur expensive? The average Honfleur trip cost is broken down by category here. All of these Honfleur prices are calculated from the budgets of real travelers.

Looking for a hotel in Honfleur? Prices vary by location, date, season, and the level of luxury. See below for options.

How much does it cost to go to Honfleur? Naturally, it depends on the dates. We recommend Kayak because they can find the best deals across all airlines.

The price of renting a car in Honfleur will depends on dates, the type of car, the location, and your age. We recommend Kayak because they can find the best deals across all car rental companies.

Honfleur On a Budget 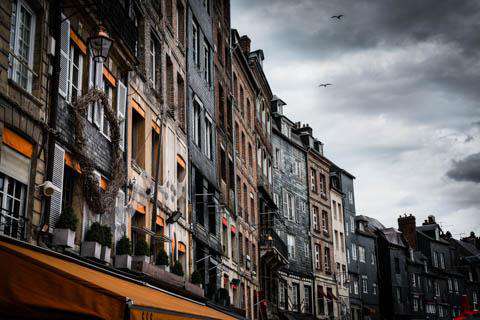 Honfleur, France
Honfleur is a commune in the Calvados Department in northwestern France. It is located on the southern bank of the Seine estuary across from le Havre and very close to the Pont de Normandie exit. Honfleur is the most picturesque of the Cote Fleurie's seaside towns. The cobbled streets that are lined with a stunning selection of stylish boutiques in the old timber houses. It is especially known for its old, beautiful port, characterized by its houses with slate-covered frontages, painted many times by artists, including in particular Gustave Courbet, Eugene Boudin, Claude Monet and Johan Jongkind, forming the ecole de Honfleur (Honfleur school) which contributed to the appearance of the Impressionist movement. Much of its Renaissance architecture remains intact-especially around the 17th-century Vieux Bassin harbor, where the water is fronted on one side by two-story stone houses with low, sloping roofs and on the other by tall slate-topped houses with wooden facades.

Some of the best sights are the town itself and the picturesque buildings and landscapes. But the most popular sight here is the ravishing wooden church of Ste-Catherine, which dominates a tumbling square. The sanctuary and ramshackle belfry across the way were built by townspeople to show their gratitude for the departure of the English at the end of the Hundred Years' War, in 1453. It is the largest wooden church in France and is popular among tourists.

Another popular sight is the Notre-Dame de Grace chapel, which was built during the 17th century, and is richly adorned with paintings and models of ships offered ex voto by sailors. The esplanade bordering the chapel offers fine panoramic views of the Seine estuary, the port of Le Havre and the Pont de Normandie (Normandy Bridge).

The Le Vieux Bassin (harbor area) is the most popular neighborhood in Honfluer. This port was built in the 17th century and apart from the narrow entrance for boats is surrounded on all sides by beautiful, tall, narrow buildings. You can also pick up your fresh fish in the market here if you want to.

The eastern Enclos, around the church of St-Etienne, is packed with interesting buildings.

The western area slopes up to the splendid wooden church of Ste-Catherine, in a district where you will find the town's main museums dedicated to the arts.

Central Honfleur's southern area is more discreet, but well worth exploring too for its architecture, including St-Leonard church and the restored fountains.

There are many fun things to do in Honfleur. One of which is a festival of sorts. It is called the Fete des Marins and it is a two day event occurring on Pentecost Sunday and Monday (50 days after Easter). On the first day all the boats in the harbor are decked out in flags and paper roses, and a priest bestows his blessing at high tide. The next day, model boats and local children head a musical procession to the small chapel of Notre-Dame de Grace.

Another exciting festival is the five day Fete du Jazz. It occurs in mid-August, with performances in the streets and venues throughout the town center.

You could also check out some of the great museums the city has to offer, including the Blockhaus de la Gare, which a historic site with many remnants of World War II.

The cuisine of Honfleur offers fresh seafood, tasty fruits, and delicious meats due to its location on a long coastline of fertile land. Some local specialties include: Canard a la rouennaise, a dish prepared with duck stuffed with a sauce made of its own blood and liver, Tarte aux pommes, which is tart stuffed with apple and topped with whipped cream or ice cream, and to drink, try Calvados, the most famous apple brandy in the province of Normandy.

The closest airport to Honfleur is the Deauville-Saint-Gatien Airport, which is a local airport and receives flights from local airports such as London or Paris only. There is a bus that runs straight from the airport to the town center, so if you fly into the airport you can easily get to the town with public transit. Honfleur has no train station, but there are some bus services available in the town.