How much does it cost to travel to Sado?

How much money will you need for your trip to Sado? You should plan to spend around ¥7,584 ($55) per day on your vacation in Sado, which is the average daily price based on the expenses of other visitors. Past travelers have spent, on average, ¥2,846 ($20) on meals for one day and ¥1,702 ($12) on local transportation. Also, the average hotel price in Sado for a couple is ¥7,257 ($52). So, a trip to Sado for two people for one week costs on average ¥106,173 ($763). All of these average travel prices have been collected from other travelers to help you plan your own travel budget.

A vacation to Sado for one week usually costs around ¥53,086 for one person. So, a trip to Sado for two people costs around ¥106,173 for one week. A trip for two weeks for two people costs ¥212,346 in Sado. If you're traveling as a family of three or four people, the price person often goes down because kid's tickets are cheaper and hotel rooms can be shared. If you travel slower over a longer period of time then your daily budget will also go down. Two people traveling together for one month in Sado can often have a lower daily budget per person than one person traveling alone for one week.


How expensive is Sado? How much money do I need for Sado?

How much does a trip to Sado cost? Is Sado expensive? The average Sado trip cost is broken down by category here. All of these Sado prices are calculated from the budgets of real travelers.

Looking for a hotel in Sado? Prices vary by location, date, season, and the level of luxury. See below for options.

How much does it cost to go to Sado? Naturally, it depends on the dates. We recommend Kayak because they can find the best deals across all airlines.

The price of renting a car in Sado will depends on dates, the type of car, the location, and your age. We recommend Kayak because they can find the best deals across all car rental companies.

Sado On a Budget 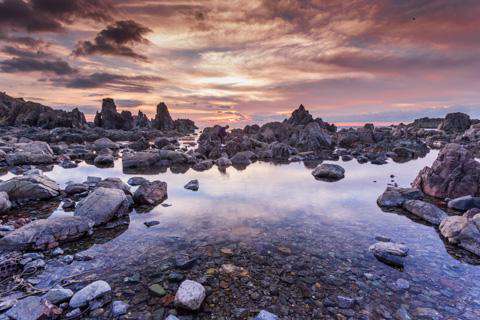 Sado Island
Sado Island, Japan is located just off the coast of Niigata and is an old gold mining town that has since developed into a quiet summer holiday destination. The island is home to two mountain ranges, O-Sado in the north and Ko-sado in the south, with the popular Kuninaka plain in between the mountain ranges. With the remoteness of the island, it has become a popular destination for tourists to experience old Japan and get away from the busy mainland.

Weather on Sado Island tends to be best during summer when the temperature stays in the 70's (Fahrenheit) making it comfortable to be outside all day. Winters tend to be in the low 40's but quite windy and snowy, especially in the mountains. Due to these conditions, getting onto the island can be difficult during the winter due to ferries and public transport being shut down.

A popular, yet bleak, attraction is the Sado Gold Mine where you'll find animatronic figures showing the despair and misery associated with working in the mines. Lift your spirits after the gold mine by taking a scenic walk on the Sotokaifu Coast to see the rocks, cliffs, and gorges that overlook the sea.

Sado is also home to quite a few temples, including a version of the famous Kiyomizudera temple from Kyoto called Seisuji. The temple was built specifically for locals so that they could pray in Kiyomizudera without traveling to Kyoto to do so. When traveling from Mano to Ogi, look out for Nashinoki-jizo, a small spot in the woods that is home to hundreds of small statues that are said to cure the disease of children. At Shukunegi harbor, you'll find traditional wooden houses and stunning views of the sea.

Sado Island is comprised of three main regions: O-Sado, Kuninaka, and Kosado. O-Sado's main city is Aikawa, an old gold mining town. You'll find many tourist attractions here and it is often the main thoroughfare into the O-Sada mountain range. Kuninaka is the most populated area of the island and therefore has the majority of accommodations, restaurants, as well as plenty of temples and other attractions. Kosado is the southern mountain range and home to the city of Ogi, a popular coastal town with many museums and picturesque locations.

Sado hosts many festivals throughout the year, with the most popular being the annual Earth Celebration. The Earth Celebration is an art festival run by the taiko Japanese drumming group Kodo. There are live performances using large O-daiko drums by the Kodo group along with other acoustic concerts throughout the festival. Sado's festivals are famously known for their dances, including the traditional Okesa dance which is simple enough for even tourists to learn!

Hiking the O-sado mountain range is a popular activity and the range has plenty of hiking trails to follow. It is important to note that Mt. Kinpoku requires a permit to walk through as it is occupied by Japan's Self-Defense forces. If you're around during the summer months, you can take a dip in the ocean at Sawata beach or go diving in the Ogi or Senego areas.

Sado is famous for their fresh seafood, especially the sushi, sashimi, and oysters. If you feel like splurging, try out the famous Sado Beef which comes directly from the fields of Osado. You can find a variety of restaurants on the island, ranging from burger joints to Japanese-Chinese infusions.

While bars and clubs are sparse on the island, sake breweries are definitely not. There are seven breweries in the area, three of which are located in the Mano area on the west coast. Mano is the self-proclaimed independent state of the Alcohol Republic and you can actually get a passport from the Sado tourist office to have stamped at the various breweries.

The only way to get onto the island is by boat, with the most popular option being the Niigata-Ryotsu ferry since it departs every hour. There are buses that run primarily in the Kuninaka plains area and occasionally connect to points further out around the island. If you plan to do a lot of traveling around the area, you could rent a car. Just keep in mind that some of the coastal roads tend to be extremely windy and should be traveled with caution.