How much does it cost to travel to Chichibu-Tama-Kai?

How much do vacation rentals cost in Chichibu-Tama-Kai? Prices vary by location, date, size of the place, and the level of luxury. See below for options.

How much does it cost to go to Chichibu-Tama-Kai? Naturally, it depends on the dates. We recommend Kayak because they can find the best deals across all airlines.

The price of renting a car in Chichibu-Tama-Kai will depends on dates, the type of car, the location, and your age. We recommend Kayak because they can find the best deals across all car rental companies. 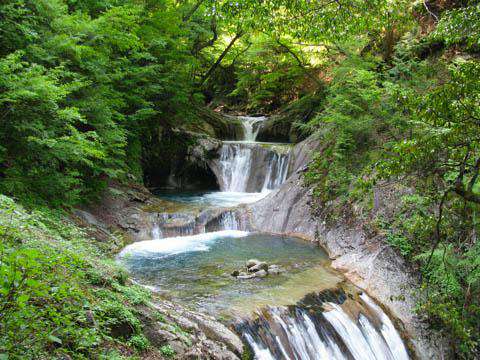 Chichibu-Tama-Kai National Park, Japan (©MOEJ)
Located at the intersection of the Saitama, Yamanashi, Nagano, and Tokyo Prefectures, Chichibu-Tama-Kai National Park is a national park in Japan webbed with hiking trails and many ancient shrines. Mount Mitake, Mount Mitsumine, and Mount Mito are just three of the eight peaks that tower above the park at over 2000 meters, while rivers sources flowing below include the Arakawa River, Shinano River, Tama River, and Fuefuki River (Fuji River).

Since the park meets at the joining of four of Japan's prefectures, it encompasses a large area with many different points of interest. Near the Tokyo metropolis side, Mount Mitake and Mount Mito make up the two major attractions. Mount Mitake has been worshipped as a sacred mountain for centuries and houses the Musashi-Mitake Shrine, with a cable car for easy access-while Mount Mito is known for its three peaks and its forest of Japanese Blue Beech.

The Saitama Prefecture side is known for the Tochimoto Sekisho Historical Site and Nakatsu Canyon, the Nagano Prefecture side features a famous mountain trail from Kobushi to Mokiba called the Chikuma River Upstream Course, and the Yamanashi Prefecture side is home to the Daibosatsu Pass, Mitake Shos?n Gorge, and Nishizawa Canyon which was carved by the Fuefuki River.

Little hubs of civilization can be found around most of the park's major attractions. Many of the towns throughout the region are more like rural villages with some residents, information, guest houses, and a few places to eat. The park has three Visitors Centers: Yamano Furusato Visitor Center, Okutama Visitor Center, and Mitake Visitor Center. The third is perhaps one of the better known ones since it is located near one of the more frequented attractions of Mount Mitake. At the peak of this mount there is a Shinto shrine called Musashi-Mitake Shrine which was established during the reign of Emperor Sujin in 90 B.C. The Visitors center here offers guides and maps, public restrooms, and a small nature center, and is located within a village that also features a cable car station that can take visitors up to the shrine.

The number one activity within Chichibu-Tama-Kai National Park is hiking. Backpackers come from all over to experience Japan's outdoor wilderness, discover the sacred quiet of the mountain shrines, and stumble across forgotten villages preserved in tradition. Two of the most popular hikes are those up to the summits of Mount Mitsumine and Mount Mitake, or both if you choose to take the trail that connects the two peaks. It is possible to take a bus up to the top, but with unbeatable views and waterfalls along the way it might be more worth it to take the climb. At the top of Mount Mitsumine, as a reward for your hike, you can even take a refreshing dip in one of the shrine ryokan Kounhaku's traditional onsen baths. Then head through the gates to take in the beauty of the view and the 2000-year-old Mitsumine Shrine.

Like in most national parks, if you are planning an extended camping adventure, it is best to enter the park fully stocked with equipment, food, and water. There are, however, a few hubs where visitors can grab a nice sit down meal with views of the surrounding mountains. Near the Mitsumine Shrine, for example, there is one restaurant close to the bus stop that features traditional Japanese seating and breathtaking scenery. Kounkaku is another restaurant, located on the ground floor of the shrine ryokan, and offers basic meals of things like noodles or curry rice. On the short trail connecting Mitsumine-guchi to the cable car station, there are also a number of basic food stalls and tea houses. Tea, coffee, and snacks can also be found at Shokyoin. Built in 1739 on the grounds of the Mitsumine Shrine, the historic spot also serves a local shiso (parilla) juice made from a Japanese plant of the mint family, tasting refreshing and summery.

By air, start by flying to Tokyo, either into Narita Airport or Haneda Airport.

The most popular access route to the park is on the Seibu Chichibu Line from Ikebukuro in Tokyo to the terminus Chichibu station. The journey takes about 75 minutes total.

For access to the Oku-Tama region, take the JR Chuo line to terminus Ome (75 minutes), transferring at Tachikawa if necessary. From here, you transfer to the Ome line and travel to Mitake Station.

All in all, the park can be reach by three railway stations: Chichibu, Oku-tama, or Enzan stations.

Once inside the park, you will see many travelers on foot, as hiking is a popular way to see the sights.