How much does it cost to travel to Granada?

How much money will you need for your trip to Granada? You should plan to spend around €98 ($102) per day on your vacation in Granada, which is the average daily price based on the expenses of other visitors. Past travelers have spent, on average, €29 ($31) on meals for one day and €17 ($18) on local transportation. Also, the average hotel price in Granada for a couple is €94 ($98). So, a trip to Granada for two people for one week costs on average €1,375 ($1,432). All of these average travel prices have been collected from other travelers to help you plan your own travel budget.

A vacation to Granada for one week usually costs around €688 for one person. So, a trip to Granada for two people costs around €1,375 for one week. A trip for two weeks for two people costs €2,750 in Granada. If you're traveling as a family of three or four people, the price person often goes down because kid's tickets are cheaper and hotel rooms can be shared. If you travel slower over a longer period of time then your daily budget will also go down. Two people traveling together for one month in Granada can often have a lower daily budget per person than one person traveling alone for one week.


How expensive is Granada? How much money do I need for Granada?

How much does a trip to Granada cost? Is Granada expensive? The average Granada trip cost is broken down by category here. All of these Granada prices are calculated from the budgets of real travelers.

Looking for a hotel in Granada? Prices vary by location, date, season, and the level of luxury. See below for options.

How much does it cost to go to Granada? Naturally, it depends on the dates. We recommend Kayak because they can find the best deals across all airlines.

The price of renting a car in Granada will depends on dates, the type of car, the location, and your age. We recommend Kayak because they can find the best deals across all car rental companies.

What did other people spend on Transportation in Granada?

Typical prices for Transportation in Granada are listed below. These actual costs are from real travelers and can give you an idea of the prices in Granada, but your costs will vary based on your travel style.

What did other people spend on Food in Granada?

Typical prices for Food in Granada are listed below. These actual costs are from real travelers and can give you an idea of the prices in Granada, but your costs will vary based on your travel style.

Tips and Handouts Budget in Granada

Granada On a Budget 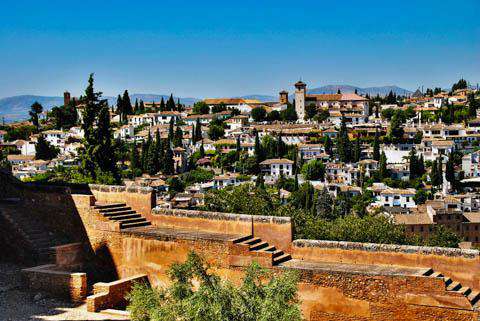 Granada, Spain
Granada is a city of southern Spain located in the foothills of the Sierra Nevada Mountains in the autonomous community of Andalucia. Perhaps the most notable feature of the city is its medieval architecture that dates to the Moorish occupation of Spain. Each example stands from another time and place, strong fortresses and castles against the backdrop of lumbering mountains. Yet they are surrounded by a city thriving with modern day quirks. From castles and fortresses to bars, restaurants, and cafes, Granada is a unique setting for an otherworldly getaway.

The most famous and most alluring sight of Granada is the Alhambra, a medieval complex that overlooks the city. The hilltop fortress spans a massive area, encompassing royal palaces, serene patios, and reflecting pools from the Nasrid dynasty, as well as the fountains and orchards of the Generalife gardens. Existing as the last Moorish stronghold in Europe, the Alhambra reflects the splendor of Moorish civilization in Andalusia giving visitors an inside look of the area's history. A breathtaking example of ornamental architecture, the complex is also home to the Palace of Charles V which now houses Alhambra Museum (with historical artifacts from the site) and the Fine Art Museum.

Down below in Granada itself there exist more inspiring sights like the Cathedral Granada with Gothic-Renaissance-Baroque foundations, the Royal Chapel with the tombs of King Ferdinand II and Queen Isabella I, the historic and picturesque square Plaza de Bib-Rambla, as well as the Plaza Nueva the city's oldest square. Another interesting sight is the Alcaiceria, a set of winding alleyways which were originally home to a Moorish silk market under Granada's Muslim rule. Today the market holds mostly souvenir stores underneath the Moorish-style archways decorating the walls.

Plenty of other things to see and do can be found in this dynamic city, as it's not just all about the main attractions. Check out this guide to non-touristy things to see in Granada for more details and things to see (such as the secret gardens).

Oriented around the intersection of Gran Via de Colon and Calle Reyes Catolicos, central Granada is the historic center and bustling heart of the city. With its many shops, restaurants, bars, and attractions, the city center is a hub for activity. Many of the buildings are situated along narrow cobblestone and brick alleys or on the edge of one of the picturesque plazas in the area, which all add a certain charm as you go about your day. Walking through the streets, the sights, smells, and sounds will take you into a world of superb architecture, good food, and friendly faces with local hospitality. As far as shopping goes, ceramics, silver, and inlaid woodwork are just some of the most famous craft products from Granada. Many traditional shops selling items like these are located along the streets of the city center.

The gem of the city in Granada is the architecture, and one could spend days exploring the fortresses, castles, cathedrals, and cobbled streets. It is evident everywhere you go, even in amidst the modern bustle of shops, bars, and restaurants. Needless to say, sight-seeing and shopping can occupy much of a visit.

Another unique attraction of Granada includes Aquaola, a local water park with man-made wave pool, slides, and large floats. At la Plaza de Villacantoria, visitors can take the #3 bus to get to the park.

The Hammam Arab Baths, near Plaza Nueva, are another one-of-a-kind activity to engage in during your stay. Though it is a modern spa with affordable baths and massages available, the ambiance and decorations of the place reflect the ancient Muslim baths in Granada.

Finally, if you're a thrill-seeker looking for some traditional action in the Spanish city, try catching a show at the Plaza de Toros de Granada, Granada's bullfighting ring.

Tapas, tapas, tapas! Granada is known for serving the tasty bites free with any drink order, making it super affordable to taste your way around the city. Lunch is generally 13:00 to 16:00 (1pm-4pm), and the dinner starts from 20:00 (8pm) to the late hours of the night. Because of siesta, where most shops and businesses close for the afternoon, locals are accustomed to having dinner very late. Tapas bars can generally be found on Navas and Sarabia streets near the Town Hall, the AlbaicÃ­n neighbourhood, around the bullring, or in Plaza Bib-rambla. Because the city is near the Sierra Nevada ski resort and the Costa del Sol, where tropical fruit is grown, the traditional cuisine of Granada has an exotic touch, with deep Moorish roots. Fish from the sea, country dishes from the Alpujarra, and delicious produce from vegetable gardens in the area also add a unique flair to Granada cuisine.

By plane, Granada has a small airport situated 12km (half an hour with normal traffic) west of the city which serves a limited number of flights. For budget airlines it is best to fly into nearby Malaga. Iberia provides daily flights to and from Madrid. Vueling operates budget flights to and from Barcelona, Rome and Paris airports.

Regular buses run from Seville, Malaga, Madrid, and Cordoba as well as a few direct services to the port of Algeciras. Malaga is well serviced by buses and is a good place to transfer if a direct service is not available. The bus station is located about 2 miles from the city center.

Three trains run each day on a picturesque line to Algeciras via Antequera and Ronda. Granada is also on a stop on a line between Almeria and Seville, with four trains daily. There are also two daily trains to Madrid via Cordoba, one or two daily to Barcelona via Linares-Baeza and Valencia, and one to Linares-Baeza. For Malaga, take the Algeciras train to Bobadilla and change to a Malaga-bound train there.

The train station is well served by local bus service.

Looking for a party in Barcelona or Madrid?
Traveling alone to Seville?