How much does it cost to travel to Almeria?

How much money will you need for your trip to Almeria? You should plan to spend around €79 ($82) per day on your vacation in Almeria, which is the average daily price based on the expenses of other visitors. Past travelers have spent, on average, €32 ($34) on meals for one day and €16 ($17) on local transportation. Also, the average hotel price in Almeria for a couple is €71 ($74). So, a trip to Almeria for two people for one week costs on average €1,105 ($1,151). All of these average travel prices have been collected from other travelers to help you plan your own travel budget.

A vacation to Almeria for one week usually costs around €553 for one person. So, a trip to Almeria for two people costs around €1,105 for one week. A trip for two weeks for two people costs €2,210 in Almeria. If you're traveling as a family of three or four people, the price person often goes down because kid's tickets are cheaper and hotel rooms can be shared. If you travel slower over a longer period of time then your daily budget will also go down. Two people traveling together for one month in Almeria can often have a lower daily budget per person than one person traveling alone for one week.


How expensive is Almeria? How much money do I need for Almeria?

How much does a trip to Almeria cost? Is Almeria expensive? The average Almeria trip cost is broken down by category here. All of these Almeria prices are calculated from the budgets of real travelers.

Looking for a hotel in Almeria? Prices vary by location, date, season, and the level of luxury. See below for options.

How much does it cost to go to Almeria? Naturally, it depends on the dates. We recommend Kayak because they can find the best deals across all airlines.

The price of renting a car in Almeria will depends on dates, the type of car, the location, and your age. We recommend Kayak because they can find the best deals across all car rental companies.

Almeria On a Budget 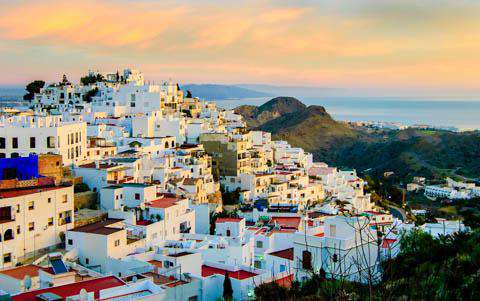 Mojacar Village, Almeria, Spain
Almeria is a city (and province) in the Andalusia region of Spain. It is located in the southeast area of Spain on the Mediterranean Sea. Almeria is a charming area rich in history. Though it is not as well known as some more popular cities in the area, such as Granada, Seville, or Malaga, its popularity has increased significantly over the years with the growth of its holiday areas. Almeria has over 62 miles of untamed coastline, something that is hard to find on the Mediterranean, and has outstandingly beautiful landscapes, which stands out even in an area of natural beauty. The spectacular beaches with warm waters of the Mediterranean, abundant historic and cultural sites, and large tourist centers makes Almeria a great travel destination.

There are plenty of things to see in Almeria, from the gorgeous untamed coastlines to the expanse mountainous region, to one of the only desert areas in Spain, there is plenty of natural beauty to behold. There are also many cultural and historic sights to see, of which the most popular is the Alcazaba. Founded in in 995 AD, it's the second largest Moorish fortress in Spain. It provides sweeping views of the cave quarter of Barrio de la Chanca below and is definitely worth a visit.

Another sight worth stopping at is the Almeria Cathedral, which looks like a fortress from the outside, but is a beautiful cathedral on the inside. The reason for its fortress-like construction was to protect against pirate raids.

Roquetas de Mar is another large city area and is one of the more popular areas of the Almeria province. This area also has many options as far as shopping, restaurants, and large hotels. There is free entertainment in parts of the city during the summer, which makes it a popular destination for locals on holiday.

There is always something to do in Almeria, whether you want to go for a hike in the mountains, a swim in the warm Mediterranean waters, or a nice day lounging on the beach, the natural environment provides plenty to do in itself. One incredible thing to do is to go on a tour in the Sorbas Caves. The caves are located in the Gypsum Karst Natural Park, and guided tours are available into the subterranean world with stalactites, stalagmites, and impressive gypsum crystals.

The Museum of Almeria is also worth a visit and it showcases many prehistoric findings from the region, which makes it the most impressive archeological collection in the Almeria region.

For something a little different, visit mini Hollywood in the Tabernas Desert. Its open and arid landscape has been used for Westerns and Hollywood blockbuster screens, including Indiana Jones and the Last Crusade.

Almeria, as many places in the region, is great for food and dining. The abundance of naturally grown, flavorful produce plays heavily into the fantastic flavors of the area. Because of its location right on the Mediterranean, it also has a fabulous seafood cuisine. There are many local specialty dishes worth trying. One such dish is bocas de la Isla, which is an exotic crab meat dish. A couple other local dishes to try include Iberian ham and bull's tail.

Almeria has plenty of great restaurants to choose from. On of which is Casa Puga, which is a typical Spanish taberna and has been around since the 1870's. Their specialties are anchovies and prawns, as well as their delicious vino de la sierra de la Contraviesa, a local wine personally provided by Casa Pluga's owners. Another popular restaurant is El Quinto Toro, which many locals consider to be the best tapas bar in Almeria.

Hiring a car is also a good way to get from Malaga into Almeria and is also a good option for your stay in the area. Having a car will make it much easier to get around to the many landscapes and attraction in the area, as well as nearby cities and towns. There is also a decent public transportation system including trains and buses, but it is not as extensive as in the bigger cities and may not have routes to all areas.