How much does it cost to travel to Pamplona?

How much money will you need for your trip to Pamplona? You should plan to spend around €105 ($109) per day on your vacation in Pamplona, which is the average daily price based on the expenses of other visitors. Past travelers have spent, on average, €33 ($34) on meals for one day and €20 ($20) on local transportation. Also, the average hotel price in Pamplona for a couple is €107 ($112). So, a trip to Pamplona for two people for one week costs on average €1,469 ($1,530). All of these average travel prices have been collected from other travelers to help you plan your own travel budget.

A vacation to Pamplona for one week usually costs around €734 for one person. So, a trip to Pamplona for two people costs around €1,469 for one week. A trip for two weeks for two people costs €2,937 in Pamplona. If you're traveling as a family of three or four people, the price person often goes down because kid's tickets are cheaper and hotel rooms can be shared. If you travel slower over a longer period of time then your daily budget will also go down. Two people traveling together for one month in Pamplona can often have a lower daily budget per person than one person traveling alone for one week.


How expensive is Pamplona? How much money do I need for Pamplona?

How much does a trip to Pamplona cost? Is Pamplona expensive? The average Pamplona trip cost is broken down by category here. All of these Pamplona prices are calculated from the budgets of real travelers.

Looking for a hotel in Pamplona? Prices vary by location, date, season, and the level of luxury. See below for options.

How much does it cost to go to Pamplona? Naturally, it depends on the dates. We recommend Kayak because they can find the best deals across all airlines.

The price of renting a car in Pamplona will depends on dates, the type of car, the location, and your age. We recommend Kayak because they can find the best deals across all car rental companies.

What did other people spend on Food in Pamplona?

Typical prices for Food in Pamplona are listed below. These actual costs are from real travelers and can give you an idea of the prices in Pamplona, but your costs will vary based on your travel style.

Pamplona On a Budget 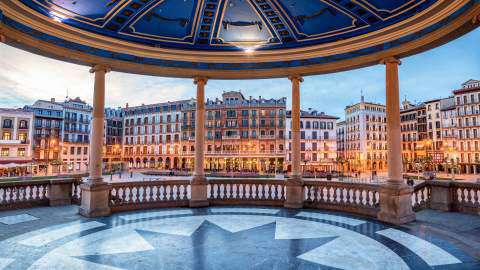 Pamplona, Spain
Pamplona is a city in northern Spain located on the snow-capped foothills of the Pyrenees Range. With the backdrop of mountains, the city is surrounded by a setting ideal for skiing, mountaineering, hiking, wildlife and breathtaking scenery. Yet Pamplona itself is a place full of lively culture and stunning architecture. With a long history, the place is embedded in tradition and perhaps most famous for its annual "running of the bulls" celebrated in July, also known as the San Fermin festival.

Pamplona is generally a charming city full of great food, friendly people, stone-paved streets, and stunning architecture. The Catedral de Santa MarÃ­a la Real y Museo Diocesano is one of the city's famed cathedrals, featuring a Neoclassical faÃ§ade with Gothic interiors. Visitors who explore the museum will see not only the temple but also an extraordinary cloister, a chapel, the refectory, and painting exhibitions. Other important examples of medieval architecture include San Nicholas, a stronghold church built in the 12th century, as well as San Saturnino and San Lorenzo.

The Palace of Navarra is a visible tribute to Pamplona's heritage. Though the palace is now used for administrative purposes, the exquisite interiors can be viewed by appointment. Just across the street from the palace, the Museum of Navarra exists as one of Pamplona's historical gems. The museum houses the greatest art collections and archaeological findings in Navarra, some of dating back to pre-historical periods while most of them fall within Roman, Medieval, Renaissance, and Baroque periods. The most prized works of art at this museum include the Mosaic of Theseus, Goya's portrait of the Marques de San AdriÃ¡n, and the Chest from Leyre.

Pamplona's exquisite gardens are another must-see, some of which date as far back as Roman times under Pompey. Taconera Park is one of the oldest parks in this city offering wide paths for pedestrians, many beautiful sculptures, and ornamental flower beds. Other picturesque parks include the Media Luna Park, Yamaguchi, and the Arga Park.

In Pamplona, the old town center of the city is where everything happens. It is the busiest area for tapas, bars, and restaurants and is the place to start when you are looking to experience some of Pamplona's nightlife. As far as shopping goes, Old Town has a selection of traditional shops, artisan shops, and brand-based stores that will satisfy anyone's souvenir needs. Castle Square, at the heart of the city, sits in Old Town surrounded by colorful 18th century houses with eye-catching rows of balconies, turrets, attics and large windows. It is also the place where the writer, Ernest Hemmingway, took much of his inspiration. The rest of Old Town consists of smaller squares, winding narrow streets, historic churches, palaces, and bell towers. It takes on an air of charm and romanticism from another time and place.

While the city is full of bustling activity year-round, from shopping and dining to sight-seeing galore, the energy of the place really comes to life during the festivities of Sanfermines. During one week in July, the atmosphere turns to one of music, bulls, drinking, and complete madness. The best-known feature of the festival is the running of the bulls which occurs daily at 8am. Six bulls run through the town center towards the Plaza de Toros (bull ring), while adventurous volunteers run in front of them. Any thrill-seeker is allowed to participate, though at his own risk.

Pamplona's bullring is the fourth largest in the world and the second largest in Spain after Las Ventas in Madrid. During Sanfermines, the bull ring gets completely sold out. At 11pm each night there is a fireworks display near the citadel or "Vuelta del Castillo." By midnight, bars are full and concerts of any type of music are playing in places like Plaza del Castillo, Plaza de los Fueros or Antoniutti. Though the full energy and spirit of the city is released during the festival, Pamplona is an enchanting place to visit any time of year.

Like many regions in Spain, tapas are a staple in the cuisine of Pamplona (though, being in the Basque region, they are called pintxos). These small bites are perfect for accompanying your drink of choice, and Pamplona has many specialties in this area. The region has become well known for its production of red wine, as well as its take on Sangria, though fresh cider is also a popular item. Some of the best restaurants in the area include the one of Ernest Hemmingway's old haunts, the Cafe Iruna, a great place to enjoy a cup of coffee and homemade tapa. La Nuez Restaurant is also known for serving famous recipes of the famous French chef Georges-Auguste Escoffier with a modern twist. One can never go wrong with a tapas bar, but there are plenty of selections when it comes to food in the old town of the city.

Pamplona-Noain Airport is the nearest airport connected with several cities. Though it is small, Iberia flies several times a day to/from Madrid and Barcelona. The nearest international airports include those in Bilbao, Zaragoza, and Biarritz, France.

Daily trains are available to and from Madrid, Barcelona, Vitoria, Galicia, Asturias and Zaragoza, among other Spanish cities. Urban buses connect the train station and Pamplona's city center.

The cheapest way to reach Pamplona is by bus. There are several daily services from Madrid, Barcelona, San SebastiÃ¡n, Bilbao, Vitoria, Zaragoza, and Oviedo. The same bus station links Pamplona with all the areas in Navarra (Estella, Tafalla, Tudela, SangÃ¼esa, Olite, etc.) The bus station in Pamplona is underground, next to the Ciuadela on Yanguas y Miranda.