How much does it cost to travel to Trieste?

How much money will you need for your trip to Trieste? You should plan to spend around €80 ($87) per day on your vacation in Trieste, which is the average daily price based on the expenses of other visitors. Past travelers have spent, on average, €25 ($27) on meals for one day and €14 ($15) on local transportation. Also, the average hotel price in Trieste for a couple is €88 ($96). So, a trip to Trieste for two people for one week costs on average €1,125 ($1,223). All of these average travel prices have been collected from other travelers to help you plan your own travel budget.

A vacation to Trieste for one week usually costs around €563 for one person. So, a trip to Trieste for two people costs around €1,125 for one week. A trip for two weeks for two people costs €2,250 in Trieste. If you're traveling as a family of three or four people, the price person often goes down because kid's tickets are cheaper and hotel rooms can be shared. If you travel slower over a longer period of time then your daily budget will also go down. Two people traveling together for one month in Trieste can often have a lower daily budget per person than one person traveling alone for one week.


How expensive is Trieste? How much money do I need for Trieste?

How much does a trip to Trieste cost? Is Trieste expensive? The average Trieste trip cost is broken down by category here. All of these Trieste prices are calculated from the budgets of real travelers.

Looking for a hotel in Trieste? Prices vary by location, date, season, and the level of luxury. See below for options.

How much does it cost to go to Trieste? Naturally, it depends on the dates. We recommend Kayak because they can find the best deals across all airlines.

The price of renting a car in Trieste will depends on dates, the type of car, the location, and your age. We recommend Kayak because they can find the best deals across all car rental companies.

Trieste On a Budget 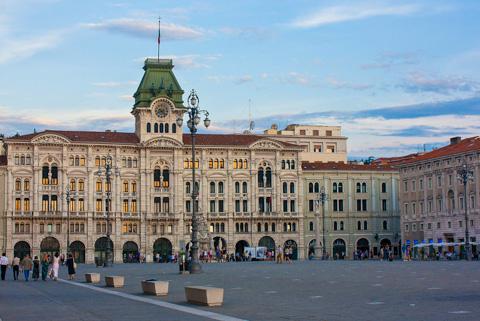 Trieste, Italy
Located on the northeast Italian coast next to the Adriatic Sea, Trieste is a city characterized by its European charm, ancient architecture, and striking sea views. Its art, music, history, and culture also take some influence from the Austro-Hungarian Empire, boasting many Slavic traditions and empire-era architecture.

One of the best attractions of Trieste is its architecture, which dates back to Austro-Hungarian rule. Many elaborate designs can especially be found in the buildings of the main square, Piazza Unita d’Italia, including the Pittori Palace, Town Hall, and the Government House. Another impressive site for architecture is the Trieste Cathedral, which showcases frescoes and mosaics built on Roman ruins. The cathedral sits on a hilltop and dates to the 14th century. Other Roman architecture can be seen at the Arco di Riccardo gate, which was built into Roman walls in 33 AD, and at the Roman Theatre which rests on a slope facing the sea and was also built in the 1st century. Finally, one of the largest monuments is probably the Castello di San Giusto. Its grounds encompass the castle, a temple, church, Roman forum, and a garden, amongst other things. On site is also a museum that showcases art and history.

Trieste is also home to many additional museums that delve into the history, art, and culture of the area and beyond. Museo Revoltella, for example, houses one of Italy's finest collections of 19th-century, modern, and contemporary art. The Museo di Storia, Arte e Orto Lapidario (or the Museum of History and Art and Lapidary Garden) features a large exhibition of archaeological, art, and historical findings from Egyptian, Greek, Roman, and pre-Roman antiquity, while the Museo di Storia Naturale houses zoological, botanical, geological, paleontological, and mineralogical collections.

The iconic city center is located near the sea, marked by the Piazza Unita d’Italia, which is home to a landmark fountain and surrounded by 19th-century avenues that branch into narrower medieval streets. This public square is also lined with historic municipal buildings and palaces, and is occasionally used as a concert venue and for visits with important foreign heads of state. The area is generally known as the Austrian Quarter, as the architecture here was built under Austrian-Hungarian dominion and resembles the styles of Vienna, including Neoclassical, Art Nouveau, Eclectic, and Baroque. The medieval streets surrounding the main square are what make up the Old City, or Citta Vecchia. This extensive system of narrow alleys are largely closed to traffic, and are open to pedestrian exploration. Throughout the city center, the streets are also dominated by coffeehouses and cafes, as coffee is a specialty of Trieste. Visitors will also find an array of restaurants, landmarks, museums, and shops.

Trieste is a city whose main attractions can be explored on foot. Walking is a great way to admire the city's unique Hungarian architecture and experience its winding medieval avenues. Sightsee any of the landmarks mentioned above and spend hours traveling back in time with the collections held at Trieste's museums. Visitors are also sometimes permitted to view the panorama from the top of the Vittoria Light, or Victory Lighthouse, or they can take a day trip just north of the city to see Miramare Castle, whose grounds include an extensive cliff and seashore park right along the coast.

Local cuisine is reflective of the area's Slavic roots with many dishes consisting of pork, potatoes, cabbage, and stuffed pastries filled with meat for a savory snack or fruit for dessert. A few specialties include a traditional plate of boiled pork called caldaia, a type of dumpling stuffed with meats or fruits called gnocchi, a fish soup called brodetto, a creamy rice called risotto, and a soup called jota that is prepared with pork, potatoes, cabbage, and finely-ground beans. One dish that especially reflects the city's Hungarian roots is goulash, a stew of meat, paprika, and other spices, though the Trieste version omits potatoes and instead includes bread or polenta on the side. Another common side dish is chifeletti, bits of crescent-shaped fried dough made from mashed potatoes, butter, flour, and eggs. Sugar can be added to turn the dish into a dessert.

Within the city, cafes are also very popular. Beginning under Austria-Hungary in the coffee industry, Trieste is still known as the "coffee capital of Italy." On the outskirts of the city are also plenty of opportunities to sample wine, cheese, and pork products from local farms. These wineries are known as "osmicas," after the Slovenian word for eight, since under the Austro-Hungarian Empire farmers were only allowed to open them for eight days each year.

The nearest major airport is the Trieste-Friuli Venezia Giulia Airport, located about 33 kilometers north of the city. The Polo Intermodale offers direct train service between the airport and Trieste Centrale stations, with an average journey of about 30 minutes. A bus service also runs between the airport and Trieste's bus station (next to the railway station), taking about 55 minutes. Taxis are also available. Other options for travel include long distance trains and buses from neighboring cities.