How much does it cost to travel to Bergamo?

How much money will you need for your trip to Bergamo? You should plan to spend around €124 ($129) per day on your vacation in Bergamo, which is the average daily price based on the expenses of other visitors. Past travelers have spent, on average, €34 ($35) on meals for one day and €26 ($27) on local transportation. Also, the average hotel price in Bergamo for a couple is €133 ($139). So, a trip to Bergamo for two people for one week costs on average €1,732 ($1,804). All of these average travel prices have been collected from other travelers to help you plan your own travel budget.

A vacation to Bergamo for one week usually costs around €866 for one person. So, a trip to Bergamo for two people costs around €1,732 for one week. A trip for two weeks for two people costs €3,464 in Bergamo. If you're traveling as a family of three or four people, the price person often goes down because kid's tickets are cheaper and hotel rooms can be shared. If you travel slower over a longer period of time then your daily budget will also go down. Two people traveling together for one month in Bergamo can often have a lower daily budget per person than one person traveling alone for one week.


How expensive is Bergamo? How much money do I need for Bergamo?

How much does a trip to Bergamo cost? Is Bergamo expensive? The average Bergamo trip cost is broken down by category here. All of these Bergamo prices are calculated from the budgets of real travelers.

Looking for a hotel in Bergamo? Prices vary by location, date, season, and the level of luxury. See below for options.

How much does it cost to go to Bergamo? Naturally, it depends on the dates. We recommend Kayak because they can find the best deals across all airlines.

The price of renting a car in Bergamo will depends on dates, the type of car, the location, and your age. We recommend Kayak because they can find the best deals across all car rental companies.

Bergamo On a Budget 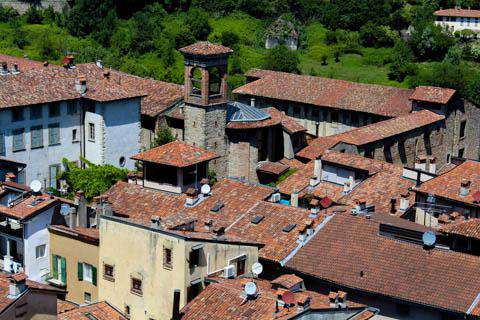 Bergamo, Italy
The blue horizon, now flush with the pinks and purples of a waning day, cloaks the Alps in a mystic blush, only able to view its peaks through faded outlines. Proud, ancient Romanesque architecture surrounds you, and the city feels no more palpable than that of a summer dream. Bergamo, Italy is located in the Lombardy region, northeast of the Italian city Milan. Deemed a treasure in Northern Italy, Bergamo is divided into two centers: the Alta (upper) city and the Bassa (lower) cities, loosely connected by funicular and walking trails. From its cobblestone streets to its Venetian walls, Bergamo is an ancient Italian paradise with many historic sights to be explored, such as Basilica di Santa Maria Maggiore and the grand Cappella Colleoni. Breathtaking views, fine dining, high-tier boutiques and shops - it is no wonder that this beguiling city attracts tourists from all walks of life. Whether you look to explores it fine art museums or simply lounge languidly about a cafe, Bergamo is a city that can bring both divert and delight!

Undoubtedly the most majestic construction found throughout the elegant Bergamo, the Cappella Colleoni is a significant landmark that gives the city distinction. Built between 1472 and 1476, the church was originally built as the personal shrine for the condottiere Bartolomeo Colleoni, the most famous captain of Italian venture, and his beloved daughter Medea. A masterwork from the Italian Renaissance, the design was entrusted to Giovanni Antonio Amadeo. Cappella Colleoni was designed in an octagonal tambour dome and in the lantern cusp with the usage of polychrome marbles. Within the church, an endless amount of art awaits you. From the nine plaques that refer to the Biblical stories to statues of the three saints John, Mark and Bartholomew, Cappella Colleoni is truly a work of artistic genius. The tomb of beloved Bartolomeo is also found within the church and can be viewed by the public. Cappella Colleoni is open from Tuesday to Sunday, but the times vary depending on the time of the year. Admission is free, so get a taste of Italian culture at the Cappella Colleoni!

Enjoy the natural beauty of Bergamo as well and explore the eighty kilometer-long mountain range of the Orobie Alps. Throughout the mountains, lush, bountiful ecosystems allow the Orobie Alps to attain a distinct biodiversity. Consisting of peaks, ridges, valleys, fields, forests, woods and natural environments of extraordinary value, the Orobie Alps also are spotted with quaint farmhouses and cottages. Covering half the provincial territory of Bergamo, the Orobie Alps have held a special cultural and historical significance to its people. Relish in its pristine countryside and untouched woodlands by hiking on one of the well-marked footpaths. If you are feeling adventurous, you can continue to follow this path until it reaches the mountain's peak, where a once-in-a-lifetime view awaits you. However, it should be stated that while mountains like Coca, Redorta, and Scais are beautiful, these mountains can be quite treacherous and are normally only reserved for expert mountaineers. The remaining mountains and surrounding land, however, is open to the general public. Be sure to prepare yourself fully for an amazing expedition across the Orobie Alps!

Not being a large town, Bergamo can easily be traveled by foot. However, to get from the two districts within Bergamo, it is recommended that you use a cable railway that connects the two sections as walking the distance is known to be quite tiring. Bergamo also acquires satisfactory bus and train networks, and maps, routes, and schedules can be easily found on the mass transit authority's website. If you are staying in Bergamo for an extended period of time, consider investing in a Bergamo Card, a city card that includes the airport bus as well as free entry to the leading museums, discounts on entry to events, exhibitions, food, and shopping. Baffle at the beauty in Bergamo!