How much does it cost to travel to Albuquerque?

How much money will you need for your trip to Albuquerque? You should plan to spend around $108 per day on your vacation in Albuquerque, which is the average daily price based on the expenses of other visitors. Past travelers have spent, on average, $33 on meals for one day and $29 on local transportation. Also, the average hotel price in Albuquerque for a couple is $111. So, a trip to Albuquerque for two people for one week costs on average $1,508. All of these average travel prices have been collected from other travelers to help you plan your own travel budget.

A vacation to Albuquerque for one week usually costs around $754 for one person. So, a trip to Albuquerque for two people costs around $1,508 for one week. A trip for two weeks for two people costs $3,015 in Albuquerque. If you're traveling as a family of three or four people, the price person often goes down because kid's tickets are cheaper and hotel rooms can be shared. If you travel slower over a longer period of time then your daily budget will also go down. Two people traveling together for one month in Albuquerque can often have a lower daily budget per person than one person traveling alone for one week.

How much does a trip to Albuquerque cost? Is Albuquerque expensive? The average Albuquerque trip cost is broken down by category here. All of these Albuquerque prices are calculated from the budgets of real travelers.

How much do vacation rentals cost in Albuquerque? Prices vary by location, date, size of the place, and the level of luxury. See below for options.

How much does it cost to go to Albuquerque? Naturally, it depends on the dates. We recommend Kayak because they can find the best deals across all airlines.

The price of renting a car in Albuquerque will depends on dates, the type of car, the location, and your age. We recommend Kayak because they can find the best deals across all car rental companies.

Albuquerque On a Budget 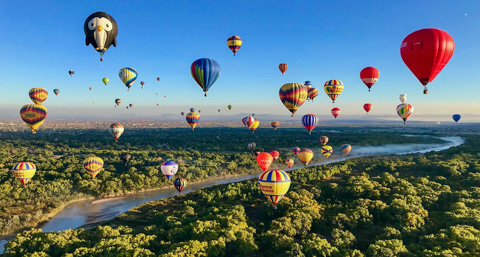 Albuquerque, NM
Albuquerque is a large city in the middle of the desert, right in the heart of New Mexico. It's the largest city in the state and has a lot to offer visitors. The city has a quaint downtown with a handful of good shops and restaurants. The surrounding area is quite beautiful and every fall the city hosts a famous and spectacular hot air balloon festival.

Albuquerque has a cold desert climate that is usually sunny and dry. There are on average 278 sunny days a year. There are four distinct seasons but temperatures are relatively mild in both the summer and winter. December and January are coolest months with lows dipping to around 10 degrees Fahrenheit. Spring can be windy but dry. Summers have low humidity highs in the 90s Fahrenheit. Fall can be pleasant or cold as winter approaches.

Some of the sites in town worth visiting include the Indian Pueblo Cultural Center, the Anderson-Abruzzo Albuquerque International Balloon Museum, and the National Hispanic Cultural Center. Also make sure you visit the Albuquerque Biological Park which includes the Albuquerque Aquarium, the Rio Grande Botanic Garden, the Rio Grande Zoo, and Tingley Beach. Also make sure you take a ride on the Sandia Peak Tramway which offers stunning views of the city and the surrounding area.

Of particular interest to tourists is Albuquerque's Old Town. This area is located east of Rio Grande Boulevard and is the oldest part of the city. The adobe architecture is interesting and there are many quaint shops and restaurants. Within the Old Town you'll find sights such as the Albuquerque Museum of Art and History, the American International Rattlesnake Museum, the New Mexico Museum of Natural History and Science, and the Turquoise Museum.

Albuquerque is a planned city with residential areas surrounded by larger roads that are lined with businesses. The city is divided into four quadrants . The railroad tracks that run parallel to I-25 are the east/west dividing line and Central Avenue is the north/south dividing line. It's easy to orient yourself in the city based on the Sandia Mountains to the east. Central Avenue is the main east west artery in the city. The eastern part of town that is closest to the Sandia Mountains is the Heights. Uptown is a business and shopping district within the Heights. The South Valley is west of I-25 and south of downtown. The Westside is the suburban area on the western side of the river.

There are a couple of hostels and plenty of budget accommodation around Albuquerque. You generally don't need reservations, but many people prefer to have a destination in mind and find prices are cheaper if they book the room in advance. This is particularly true if you're planning to stay at a nicer hotel.

One of the most famous and popular annual events in the city is the Albuquerque International Balloon Fiesta, which takes place every October for a nine day period. The hot air balloon event is the largest of its kind in North America, and is a popular event for both spectators and photographers as it is an absolutely impressive sight.

Other activities in town include local sporting events, performing arts, and many state and regional parks where you can enjoy impressive hiking opportunities.

If you hope to do a few side trips outside of town, nearby you'll find the Sandia Mountains, Petroglyph National Monument, and Rio Grande Valley State Park.

There are some wonderful restaurants in Albuquerque, particularly downtown where you can find some inexpensive Mexican options among other things. Many of the restaurants make use of the area's mild climate and offer outdoor seating. If you're not up for Mexican food there are plenty of other options including burgers, diners, bakeries, and the occasional Asian restaurant. You'll also find plenty of bars and breweries downtown where you can spend the evening relaxing with friends and a cold drink.

Albuquerque's airport, the Albuquerque International Sunport, is a transit hub for much of New Mexico. It can be helpful to have a car during your visit, and it is essential if you wish to explore areas outside of town. Road construction around town is common and you should be prepared for minor delays.

There is a bus system in Albuquerque but it offers only limited service. Rapid Ride is the express bus service, of which there are three routes that run along Central Ave. Route 766, or the red line, runs from Uptown to Unser/Central. Route 777, or the Green Line, runs from Tramway/Central to Downtown. Route 790, or the blue line, connects UNM to the Cottonwood Mall.