How much does it cost to travel to Sacramento?

How much money will you need for your trip to Sacramento? You should plan to spend around $225 per day on your vacation in Sacramento, which is the average daily price based on the expenses of other visitors. Past travelers have spent, on average, $42 on meals for one day and $41 on local transportation. Also, the average hotel price in Sacramento for a couple is $177. So, a trip to Sacramento for two people for one week costs on average $3,152. All of these average travel prices have been collected from other travelers to help you plan your own travel budget.

A vacation to Sacramento for one week usually costs around $1,576 for one person. So, a trip to Sacramento for two people costs around $3,152 for one week. A trip for two weeks for two people costs $6,303 in Sacramento. If you're traveling as a family of three or four people, the price person often goes down because kid's tickets are cheaper and hotel rooms can be shared. If you travel slower over a longer period of time then your daily budget will also go down. Two people traveling together for one month in Sacramento can often have a lower daily budget per person than one person traveling alone for one week.


How expensive is Sacramento? How much money do I need for Sacramento?

How much does a trip to Sacramento cost? Is Sacramento expensive? The average Sacramento trip cost is broken down by category here. All of these Sacramento prices are calculated from the budgets of real travelers.

How much do vacation rentals cost in Sacramento? Prices vary by location, date, size of the place, and the level of luxury. See below for options.

How much does it cost to go to Sacramento? Naturally, it depends on the dates. We recommend Kayak because they can find the best deals across all airlines.

The price of renting a car in Sacramento will depends on dates, the type of car, the location, and your age. We recommend Kayak because they can find the best deals across all car rental companies.

Sacramento On a Budget 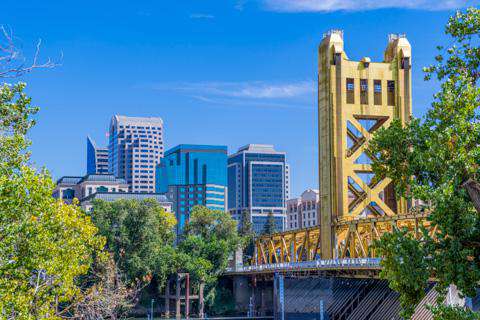 Sacramento, California
Sacramento is the capital city and one of the oldest cities in the state of California. It was founded in 1849 in the midst of the Gold Rush, and has since grown to a population of over 500,000 people. The atmosphere is more laid back than most major cities, and its heritage is rooted in the Gold Rush and Transcontinental Railroad era.

A first stop for many visitors to the city is the State Capitol and Museum, which documents the history of California and offers daily tours of the capitol building, its legislative chambers, and restored historic offices. The California Museum, home to the California Hall of Fame, is located just one block from the Capitol in the State Archives Building. Also popular is the California State Railroad Museum, which features two stories of railroad history, old locomotives, exhibits, and excursion train rides. This museum, as well as the Sacramento History Museum, are located within the historic district of Old Sacramento. The History Museum explores the local region's history from before the Gold Rush to the present throughout the museum’s two floors of interactive galleries. Another ode to the city's past exists in the Sutter Fort State Historic Park. The 19th-century fort was once an agricultural and trade colony in the Mexican Alta California province, and the first non-indigenous settlement in the California Central Valley.

Beyond history, the current culture of Sacramento is also alive and thriving. The Crocker Art Museum is the longest continuously-operating art museum in the West, featuring California art as well as diverse international works. For families, other popular attractions include the Sacramento Zoo, which houses nearly 15 acres with native and endangered species, and the nearby Fairytale Town, featuring a storybook-themed park with animals, gardens, and a cafe.

Located at the confluence of the Sacramento and American Rivers, Sacramento's downtown serves at the hub for experiencing the modern culture of the city. Home to the California State Capitol and its museum, the downtown is also the political center. It is here where locals and visitors will find the busiest dining and nightlife scene with plenty of farm-to-table restaurants, cocktail bars, and performing arts theaters, as well as museums and fine art galleries. As Sacramento is one of the cheapest places to live in California (which can be quite expensive), this city is full of thriving businesses and a busy economy.

Old Sacramento is a neighborhood of the downtown along the riverfront that makes up Sacramento's historic district with Gold Rush-era buildings, cobblestone streets, and horse-drawn carriages reminiscent of the city's pioneer days. Like the rest of downtown, Old Sacramento has many restaurants and souvenir shops, especially targeted at tourists looking to revisit the famous Gold Rush days.

With a history founded in the Gold Rush, Sacramento is a place that attracts history buffs from all over. Whether you're an expert or not, Old Sacramento's historic tours provide interesting insights into the city's past. Steam train rides are also very popular.

For an escape from the city bustle, Sacramento also has a scenic park in the center of the downtown, called Cesar Chavez Park, where outdoor concerts are often held. If that is not enough, travelers can also head to the outskirts of the city to Folsom Lake. This Reservoir sits on the American River with swimming beaches, boat launches, picnic areas, campgrounds. During the summer, it is a great place to enjoy outdoor activities like fishing, biking, sailing, kayaking, or jet-skiing.

Being a major city and California's capital city, Sacramento has a full range of dining options, the most unique of which are largely concentrated in the central district of the city. Here in the downtown, visitors will find hip and trendy restaurants serving food of all ethnicities, while the surrounding neighborhoods reflect the local tastes. Sacramento has also named itself "America’s Farm-to-Fork Capital" since many restaurants source their food locally from surrounding farms. As far as beverages go, the city is again proud of its local resources with more than 60 microbreweries and a plethora of community coffee roasters. Sacramento is also host to events like Cal Expo’s Grape and Gourmet, Sacramento Beer Week, Sacramento Cocktail Week, and the annual California Beer Craft Summit.

The city is served by Sacramento International Airport, located about 15 minutes north of downtown along Interstate-5 at the Airport Boulevard exit. Flights are available to Mexico, Canada, and all of the United States, including Hawaii. To reach downtown, visitors can either arrange a taxi or take the 42A bus for a cheaper option. Buses typically run hourly.

By train, Amtrak runs two long distance trains and two regional trains through Sacramento. Visitors can also arrive by long-distance bus or by car. The city is located at the crossroads of Interstate-5 (north-south) and Interstate-80 (east-west).