How much does it cost to travel to Juneau?

How much money will you need for your trip to Juneau? You should plan to spend around $128 per day on your vacation in Juneau, which is the average daily price based on the expenses of other visitors. Past travelers have spent, on average, $39 on meals for one day and $30 on local transportation. Also, the average hotel price in Juneau for a couple is $141. So, a trip to Juneau for two people for one week costs on average $1,792. All of these average travel prices have been collected from other travelers to help you plan your own travel budget.

A vacation to Juneau for one week usually costs around $896 for one person. So, a trip to Juneau for two people costs around $1,792 for one week. A trip for two weeks for two people costs $3,584 in Juneau. If you're traveling as a family of three or four people, the price person often goes down because kid's tickets are cheaper and hotel rooms can be shared. If you travel slower over a longer period of time then your daily budget will also go down. Two people traveling together for one month in Juneau can often have a lower daily budget per person than one person traveling alone for one week.


How expensive is Juneau? How much money do I need for Juneau?

How much does a trip to Juneau cost? Is Juneau expensive? The average Juneau trip cost is broken down by category here. All of these Juneau prices are calculated from the budgets of real travelers.

Looking for a hotel in Juneau? Prices vary by location, date, season, and the level of luxury. See below for options.

How much does it cost to go to Juneau? Naturally, it depends on the dates. We recommend Kayak because they can find the best deals across all airlines.

The price of renting a car in Juneau will depends on dates, the type of car, the location, and your age. We recommend Kayak because they can find the best deals across all car rental companies.

What did other people spend on Entertainment in Juneau?

Typical prices for Entertainment in Juneau are listed below. These actual costs are from real travelers and can give you an idea of the prices in Juneau, but your costs will vary based on your travel style.

Juneau On a Budget 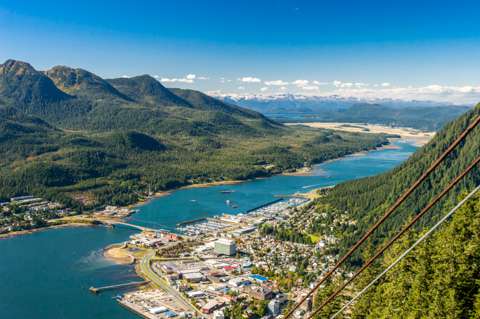 Juneau, Alaska
Juneau, Alaska is the capital city of the state, and it is also one of the most beautiful cities. Juneau is surrounded by two large mountains and a channel, so it is the only state capital not accessible by train or car. It is lined with small streets, including what is locally known as "stair streets" which can only be accessed by foot and include walking up 100-300 stairs, depending on which level you're going to. Luckily, most of the sights and stores are on the lower level, though. The only real structures located on the stair streets are residential buildings. Juneau is the most visited city in Alaska, but its population is just over 33,000. Its economy is based mostly on government, tourism, fishing, and mining.

Another popular sight is Glacier National Park, located about 30 minutes from the city of Juneau. Once you get to the Park, entry is free. Glacier National Park is often a stop for cruise ships as well, and they spend the whole day cruising through the breathtaking scenes there. The glacier filled mountains seem to stretch on forever and it is hard to rival the distinct beauty found there.

Downtown Juneau is where you will find most of the stores and entertainment options in Juneau. It is the most developed and is where many of the tours leave from. This is also where the cruise ships dock when they come to town.

Lemon Creek is home to modern retail stores and shopping, such as WalMart and Home Depot. It is located between Mendenhall valley and downtown.

One popular activity in Juneau is riding the Mount Roberts Tramway, which is a cable car that takes you 3,819 feet up onto Mount Roberts. At the top of the mountain you will find a restaurant, nature center, shops, and several trails you can follow both up and down the mountain if you would like to do some further exploring. There is a rescued bald eagle at the top that is a popular attraction for many tourists.

There are also several tours available in Juneau, including boat tours, some of which specialize in whale and other wildlife watching. There are tours, which will take you to Tracy Arm Fjord, another popular location for viewing waterfalls and glaciers, and the possibility of some wild life such as bears, whales, sea lions, etc. Juneau also has an amazing rainforest garden with a 200-degree view of the city as well as many species of flora against a forest background. There are many other hiking, fishing, and sight seeing options in Juneau as well.

Juneau has a great selection of eateries, from high class to down home-style options. Because of its location, Juneau offers many tasty seafood options, as well as a more gamey meat menu.

One of the most popular restaurants is the Red Dog Saloon, which has been one of the local favorites since it opened in the 1800's. It includes a bar area and serves classic bar dining options that won't leave you feeling hungry. And if you like crab, you won't want to miss Tracy's King Crab Shack, which is known for having some of the best crab dishes available.

This is the only capital in the United States that is not accessible by car or train. The only way to get to Juneau is by boat or plane, so getting here is a little more challenging than getting to most other destinations. Because of its location and water accessibility, it is a popular stop for cruise ships. It is the main air hub in the area, though, so you it is easy to get a plane ride in. Or, if you do want to drive, there is a ferry available in Auke Bay on the Glacier Highway, which will take you into the city.

Juneau is not a large city, the longest road is less than 50 miles, with mountains on one side and water on the other, so getting around is not very difficult. Many stores are within walking distance in the main town center. The city also has great public transportation from tour buses, to city buses, to taxis, and they can get you where you need to go!

By Bryan in Entertainment
Mendenhall Glacier Visitor Center has a great view of the famous glacier. It's operated by the US Forest Service and is very informative. Photo Point Trail as well as the salmon, bear and Steep Creek Trail are easy and accessible to walkers of all fitness levels. In August and September, black bears, often with cubs, visit Steep Creek to feed on spawning sockeye (red) salmon, causing some trails to close for safety reasons (the safety of the bears and yourself). However, there are viewing platforms that let the bears walk underneath while many people watch them fish. If you want a moderate hike through some beautiful forest, try the East Glacier trail which loops around to the east of the visitors center. Follow the trail clockwise to avoid having to climb many steps and to keep the best views of the glacier ahead of you when you descend the steps.

For the more adventurous, the West Glacier trail leads directly to the glacier where you can actually walk on it (be careful!) and also to a look out. Get off the bus just past the Mendenhall Glacier Campground stop, called Montana Creek. Walk up the road about a mile and a half to the parking lot at the end of the road and you will see the start of the trail. Eventually the trail branches into several, and the right route can take you to the glacier. Bring crampons if you want to walk on the glacier here.