How much does it cost to travel to Texas?

How much money will you need for your trip to Texas? You should plan to spend around $158 per day on your vacation in Texas, which is the average daily price based on the expenses of other visitors. Past travelers have spent, on average, $34 on meals for one day and $39 on local transportation. Also, the average hotel price in Texas for a couple is $126. So, a trip to Texas for two people for one week costs on average $2,211. All of these average travel prices have been collected from other travelers to help you plan your own travel budget.

A vacation to Texas for one week usually costs around $1,105 for one person. So, a trip to Texas for two people costs around $2,211 for one week. A trip for two weeks for two people costs $4,421 in Texas. If you're traveling as a family of three or four people, the price person often goes down because kid's tickets are cheaper and hotel rooms can be shared. If you travel slower over a longer period of time then your daily budget will also go down. Two people traveling together for one month in Texas can often have a lower daily budget per person than one person traveling alone for one week.


How expensive is Texas? How much money do I need for Texas?

How much does a trip to Texas cost? Is Texas expensive? The average Texas trip cost is broken down by category here. All of these Texas prices are calculated from the budgets of real travelers.

Looking for a hotel in Texas? Prices vary by location, date, season, and the level of luxury. See below for options.

How much does it cost to go to Texas? Naturally, it depends on the dates. We recommend Kayak because they can find the best deals across all airlines.

The price of renting a car in Texas will depends on dates, the type of car, the location, and your age. We recommend Kayak because they can find the best deals across all car rental companies.

Tips and Handouts Budget in Texas

Texas On a Budget 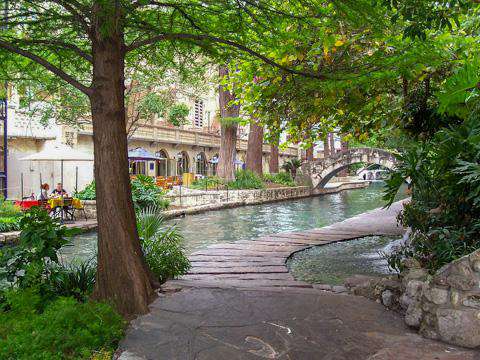 San Antonio Riverwalk
Texas is the second largest and second most populated state in the United States. It measures 267,000 square miles in size and exploring even a large section of the state takes longer than you might expect. The size and distinctive culture of the area brings much pride to the state's natives. The state was briefly its own country for ten years, starting in 1836 after the residents rebelled as a territory of first Spain and then Mexico. It then joined the United States in 1845. The state maintains its independent personality and many Texans proudly display the state flag near their home or car.

Because of its large size, Texas's climate is quite diverse. The area around the Gulf Coast has mild winters, while the northern regions can be much colder. You can expect snow in the Panhandle and mountainous areas in the west, but much less often in other parts of the state. Average summer high temperatures in the mountains might be around 80 degrees Fahrenheit, while other areas may reach into the triple digits.

Texas offers visitors a wide diversity of landscape, geography, culture, and history. Sights within the state include national parks, scenic overlooks, historic landmarks, and cosmopolitan cities. Notable places to visit include the Alamo in San Antonio, the port city of Galveston, Fort Davis National Historic Site, Dealey Plaza in Dallas, the state capital building in Austin, and the Fort Worth Stockyards. The King Ranch is a fascinating, uniquely Texas place to visit. It's a working ranch that is larger than the state of Rhode Island. If you're interested in experiencing the Hispanic culture in an American city, head to El Paso, which is the largest city on the US/Mexico border. Also check out the Hill Country when the wildflowers are in bloom. It is truly a breathtaking sight!

Texas can be divided into seven different regions. The Plains of the Panhandle is where you'll find Lubbock, Amarillo and Abilene. The Prairies and Lakes area surrounds Dallas and Fort Worth. Piney Woods is noted for its pine forests, bayous and history during the Civil War. The Gulf Coast has many beautiful beaches and port cities such as Galveston. The South Texas Plains run along the Rio Grande and include San Antonio. The Hill Country is where you'll find Austin, and Big Bend Country is famous for Big Bend National Park and Guadalupe Mountains National Park.

Activities in Texas range from outdoor hiking in national parks, rock climbing, swimming in rivers or springs, or relaxing on the beach. There are a good number of amusement parks in the state with some of the most notable being Six Flags, Sea World, Schlitterbahn, and Wonderland Park. National Parks in the state include Big Bend National Park and Guadalupe Mountains National Park. You can also visit Palo Duro Canyon or the Rio Grande Valley.

In addition to local eateries, there is no shortage of chain restaurants throughout Texas. As you travel through the more rural areas you will find plenty of fast food joints at exits off the interstate. In the most rural areas these may be your only option for some distance. Prices are cheap though and the food is predictable, all though not particularly good.

If you're hoping to explore Texas with any level of detail then a car is a must. The state's vast size makes it difficult to cover if you're short on time. Despite the excellent road network, do not underestimate the significant distance and travel times between many cities. Driving throughout the state is relatively easy and safe. Gas stations become less frequent in rural areas so it is best not to let you tank drop to empty. Speed limits are also strictly enforced, particularly in and around smaller towns. The rural speed limit is usually 70 MPH though it may be 80 MPH in some areas.

Amtrak does offer several lines within the state, although train travel is usually slow, expensive, and inconvenient. Flying may be your best option for traveling across the state. There are major airports in Dallas, Houston, San Antonio, Austin, and El Paso. There are also smaller airports in many cities throughout the state. Greyhound and Megabus both offer intercity bus routes, but again, these can be slow and uncomfortable.