How much does it cost to travel to Fraser Island?

How much money will you need for your trip to Fraser Island? You should plan to spend around AU$254 ($179) per day on your vacation in Fraser Island, which is the average daily price based on the expenses of other visitors. Past travelers have spent, on average, AU$58 ($41) on meals for one day and AU$114 ($80) on local transportation. Also, the average hotel price in Fraser Island for a couple is AU$250 ($176). So, a trip to Fraser Island for two people for one week costs on average AU$3,557 ($2,503). All of these average travel prices have been collected from other travelers to help you plan your own travel budget.

How much do vacation rentals cost in Fraser Island? Prices vary by location, date, size of the place, and the level of luxury. See below for options.

How much does it cost to go to Fraser Island? Naturally, it depends on the dates. We recommend Kayak because they can find the best deals across all airlines.

The price of renting a car in Fraser Island will depends on dates, the type of car, the location, and your age. We recommend Kayak because they can find the best deals across all car rental companies.

Fraser Island On a Budget 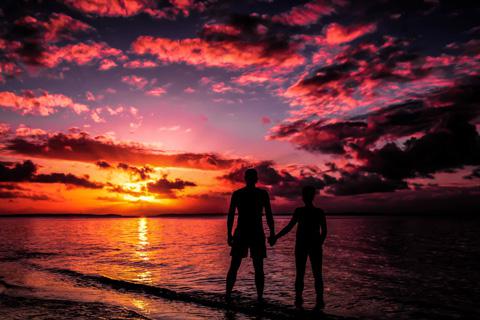 Fraser Island
Fraser Island, located off Australia's eastern Queensland coast, is the world's largest sand island. It is best known as a camping and ecotourism destination, with a number of panoramic viewpoints, beaches, lakes, and freshwater pools. Hervey Bay, a beachside city on the nearby mainland, is a primary gateway to the island.

The freshwater lakes are a major attraction for visitors coming to Fraser Island. Lake MacKenzie with its calm crystal blue waters and white sands is especially popular, and usually draws a crowd midday during peak season. Near the lake there is also a pleasant walking trail along Wanggoolba Creek. Lake Wabby is green-colored lake inhabited by freshwater turtles and catfish, and is another common place for swimming, just a 30 minute walk from the beach.

The beach itself is also a prime location for swimming, beachside activities, and experiencing some of its many unique features. The Champagne Pools, for example, are rock pools named for their froth that provide a safe place to bathe in the seawater. Eli Creek, also along the main beach, is a freshwater current where visitors can float or walk along its boardwalk. And then there is the Maheno shipwreck a retired passenger steamer that was blown ashore in 1935 and was even used for target practice by Australian Airforce during World War II.

As far as views go, one of the best is Indian Head, a rocky outcrop at the northern end of the main beach. Visitors climb to the top for a panoramic overlook of the beach and the ocean, sometimes spotting sharks, rays, turtles, and dolphins down below. The Pinnacles or Cathedrals are also very scenic, exhibiting ribbons of colorful sandstone in its cliffs.

Hervey Bay, located on the mainland, is the hub of civilization for the Fraser Island area. It is best known as a gateway to Fraser Island and the southern Great Barrier Reef, and is also a popular whale watching destination. Whale season starts late July and goes through to early November with Antarctic humpback whale being the migratory species often sighted.

Hervey Bay is actually a few seaside towns merged along the bay rather than a single town. These smaller towns consist of Urangan, Torquay, Scarness, Pialba, and Point Vernon, each with its own shopping centers and recreational hubs. The Esplanade is a 14 kilometer-long pathway that stretches from the Urangan Harbour at the eastern end of the city to Gatakers Bay in the west. It is a primary stretch for experiencing beaches, ocean views, parks, playgrounds, botanic gardens, piers, swimming, boating, fishing, marine life, shopping, dining, and aboriginal heritage. Other Hervey Bay attractions include a water park, a historical village and museum, aquarium, and more.

The best way to experience Fraser Island is to camp on the beach or at one of the inlet campgrounds and hire a 4WD for the visit. This method allows visitors to explore at their leisure. Other activities on the island include swimming along the beach, lakes, freshwaters pools, and creeks, wandering the boardwalks and nature trails, wildlife watching, eco tours, scuba, and snorkeling.

In Hervey Bay, there are a number of restaurants and take-away places situated in town and along the Esplanade. Like any tourist destination, the town will have dining available for all tastes and budgets with International flavors including things like Thai, Italian, Chinese, and Mexican. As a seaside location, there are also a number of restaurants serving fresh fish and seafood. Options from the sea are available from fine dining entrees to fast food like fish and chips. As far as iconic Australian foods go, Vegemite is a vitamin-rich, somewhat bitter yeast spread which is often thinly spread on buttered toast. Other unique items include a kind of chocolate biscuit called Tim Tams, fairy bread which is basically white bread buttered with sprinkles, a chocolate covered sponge cake called lamington, and macadamia nuts.

By plane, Hervey Bay Airport (just on the mainland in the beachside city of Hervey Bay) is the primary gateway to Fraser Island. It is sometimes called the Fraser Coast airport.

Driving vehicle access to Fraser Island is by ferry only. Four-wheel drive vehicles are necessary for transport around the island. Travelers have the option of bringing or hiring their own 4WD vehicle, joining a group from a Hervey Bay hostel, or taking a 4WD tour bus.

Driving around the Island

By backpackguru in Transportation
A great way to visit Fraser Island is with a four wheel drive vehicle. In the dry season the sand roads can make driving very challenging and it's not unusual for a vehicle to end up stuck. Hours may pass before a bus that can pull the vehicle out might come by. For this reason, consider visiting shortly after a rainstorm, which makes the sandy roads firmer and easier to drive on. Another option, if you don't wish to drive yourself, is to travel on a tour. If you're going for a longer period of time, you might be able to find a smaller group to visit with.