How much does it cost to travel to Honolulu?

How much money will you need for your trip to Honolulu? You should plan to spend around $227 per day on your vacation in Honolulu, which is the average daily price based on the expenses of other visitors. Past travelers have spent, on average, $42 on meals for one day and $21 on local transportation. Also, the average hotel price in Honolulu for a couple is $292. So, a trip to Honolulu for two people for one week costs on average $3,176. All of these average travel prices have been collected from other travelers to help you plan your own travel budget.

A vacation to Honolulu for one week usually costs around $1,588 for one person. So, a trip to Honolulu for two people costs around $3,176 for one week. A trip for two weeks for two people costs $6,353 in Honolulu. If you're traveling as a family of three or four people, the price person often goes down because kid's tickets are cheaper and hotel rooms can be shared. If you travel slower over a longer period of time then your daily budget will also go down. Two people traveling together for one month in Honolulu can often have a lower daily budget per person than one person traveling alone for one week.


How expensive is Honolulu? How much money do I need for Honolulu?

How much does a trip to Honolulu cost? Is Honolulu expensive? The average Honolulu trip cost is broken down by category here. All of these Honolulu prices are calculated from the budgets of real travelers.

Looking for a hotel in Honolulu? Prices vary by location, date, season, and the level of luxury. See below for options.

How much does it cost to go to Honolulu? Naturally, it depends on the dates. We recommend Kayak because they can find the best deals across all airlines.

The price of renting a car in Honolulu will depends on dates, the type of car, the location, and your age. We recommend Kayak because they can find the best deals across all car rental companies.

What did other people spend on Transportation in Honolulu?

Typical prices for Transportation in Honolulu are listed below. These actual costs are from real travelers and can give you an idea of the prices in Honolulu, but your costs will vary based on your travel style.

What did other people spend on Food in Honolulu?

Typical prices for Food in Honolulu are listed below. These actual costs are from real travelers and can give you an idea of the prices in Honolulu, but your costs will vary based on your travel style.

What did other people spend on Entertainment in Honolulu?

Typical prices for Entertainment in Honolulu are listed below. These actual costs are from real travelers and can give you an idea of the prices in Honolulu, but your costs will vary based on your travel style.

Tips and Handouts Budget in Honolulu

Honolulu On a Budget 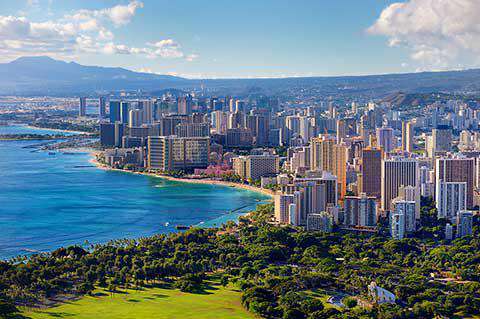 Honolulu, Hawaii
Hawaii's capital city of Honolulu, on the island of Oahu, is the state's center for government, finance, and transportation. It's also the home of Waikiki Beach, one of the most famous beaches in the state of Hawaii. Nearly one million people live in this Honolulu metropolitan area. This is almost 80% of the state's population. The city is not the relaxed Hawaiian destination that you might be searching for, but is instead a fast paced, cosmopolitan city. In addition to attracting many tourists every year, you'll also find international businesses, military defense and a diverse culture and population.

The most popular destinations in Honolulu are, of course, Waikiki Beach and Pearl Harbor.

Pearl Harbor is located in Western Honolulu and was made infamous by the December 7,1941 attack by Japanese forces which killed more than 2,000 people. The site is still functioning as a navy base and today there are several memorials found there as well as the USS Arizona Memorial.

Waikiki Beach is a white sand beach that has many hotels and tourist amenities. Diamond Head Crater is in the background. This is a great beach for swimming, sunbathing, or any number of water sports.

Honolulu is split into several districts. The downtown area has the harborfront as well as the state's government buildings and many of the area's museums. Waikiki is where the tourists flock. It has white sand beaches, highrise hotels, and crowds of sunbathers and surfers enjoying the atmosphere. Manoa-Makiki gives you a view of more tropical scenery in the Koolau Mountains. It's also home to the University of Hawaii. Eastern Honolulu is more residential in nature and has some nice beaches and snorkeling areas. Western Honolulu is where you'll find the city's airport as well as the military memorials of Pearl Harbor.

Outdoor recreation opportunities are plentiful in and around Honolulu. Do make sure you get out of town and enjoy some hiking. The views in Hawaii are absolutely breathtaking and the natural scenery is unlike anywhere else. Many people take a surfing lesson while they're in the area. Waikiki Beach is a great place to try surfing for the first time. There are also luaus and traditional hula shows that many visitors enjoy seeing. Concerts, clubs and bars are also abundant around town.

Food in Honolulu can be expensive, but there is a diversity of options available. Seafood and sushi options are plentiful, as are other Japanese dishes. A favorite Hawaiian chain restaurant is Zippy's, which is comparable to Denny's. It's a favorite of the locals and prices are reasonable if you're on a budget. Chili is particularly popular at this restaurant. Other dining options around town include burger joints, Korean restaurants, cafes, and bakeries. The quality of the food can vary so it is best to avoid heavily trafficked tourist destinations and instead find out where the locals eat.

Shaved ice is another Hawaiian specialty. Waiola is the oldest and one of the best places to try it. The flavors are surprisingly diverse with some unique options available.

Most visitors to Hawaii at least pass through Honolulu as it has the state's largest airport. Hawaiian Airlines is one of the most popular as it serves most of the major cities in the U.S. with routes to Hawaiian cities. Consider flying Business Class on Hawaiian Airlines if you want a nice upgrade.

Many of these visitors choose to spend at least a few days exploring the city and its nearby beaches. Renting a car during your time here will make your visit more efficient and enjoyable, particularly if you plan to visit some of the more outlying areas or explore the whole island of Oahu.

If you're planning to stay only in Honolulu, there is a decent bus system so a car is not necessary. Traffic can be frustrating, so if you can avoid driving in the city itself that is for the best. The public bus service, called TheBus, offers a decent number of routes around town. It is also possible to catch an intercity bus to other towns on Oahu. The Circle Island Route, #88A, goes around the entire island.

You can pick up a taxi at Honolulu International Airport that will take you to Waikiki Beach for about $40 excluding a tip.